Some Ideas to Advance Public Involvement in Urban Decision Making

Recently, Bruhat Bengaluru Mahanagara Palike (BBMP) received a surge of objections from people opposing the felling of hundreds of trees for the proposed steel flyover on Ballari Road and the widening of Jayamahal Road. In addition, concerns have been raised regarding the ongoing felling of trees on Kanakapura Road and Mysore Road. There is also the threat of mass felling of trees along the western corridors of Bengaluru.

The Tree Act and Tree Committee must be held accountable to prevent the mass felling of trees for infrastructure projects. While the law needs to protect farmers’ access to trees for fuelwood and timber, urban green cover must also be protected so that cities can be livable spaces. Due concern must be invested in protecting urban green cover as it also serves as a wildlife corridor.

Please have a look at our PILs at: ESG’s PIL on road widening and Tree felling, Bangalore Metro, GKVK, Tree Act and other relevant documents

We are grouping together previous campaign efforts to protect trees to assist anyone interested in stepping in and supporting ongoing tree protection efforts:

Public Consultation on “The Road Widening Schemes of Bengaluru: Impacts and Alternatives” (2007)

Documents, Right to Information and Correspondence with Public Officials (2008)

Minutes of Meetings of the Empowered Committee

Workshop on Establishment of Ward Committess

BDA has postponed the Public Hearing on the Revised Master Plan, 2013

Public Consultation a must 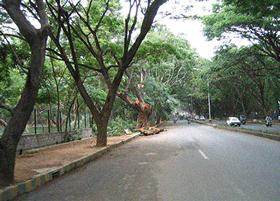 The Future Of Tree Protection In Karnataka

We invite you to participate in the final session of #esgwebinar. We have invited all our eminent speakers to this session. We will play a insightful segment of their talk & seek their response followed by a conversation. Register here to join us: https://bit.ly/esg-web-talk

Join us for today's webinar on '2020: An Existential Hindsight for a Better Tomorrow' by Dr. Manju Reddy, Founder & Chair, Arodhum International.
Register now at: http://bit.ly/esg-web-talk
You can also watch this on ESG's Facebook Group Page: http://facebook.com/groups/esgindia

Come join us on week 11 of ESG Global Web Talk Series on 3rd July '20 (Friday) at 5PM IST. The topic of webinar is '2020: An Existential Hindsight for a Better Tomorrow' with Dr. Manju Reddy
Register now at: https://bit.ly/esg-web-talk

@E_S_G You may watch this also on ESG’s Facebook Group page: http://www.facebook.com/groups/esgindia

Join us for the webinar "Why Are We Gaia Blind?" to explore planetary ecology, holistic science, and ways of learning from the earth today at 5 PM (IST). The speakers for the talk are Antonio Donato Nobre & Stephen Harding. Register now at: http://bit.ly/gaia20