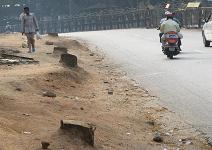 The Bruhat Bengaluru Mahanagara Palike (BBMP) has proposed to widen 91 prime roads in Bangalore, supposedly to reduce traffic congestion in the city. At a whopping cost of Rs.8-10 crores per kilometer this project is likely to affect over 400 kilometers of prime roads in the city.

The road-widening project will irrevocably alter Bangalore’s landscape, destroying lakhs of homes and livelihoods, heritage structures, and thousands of avenue trees. Likewise, it will compromise the safety of pedestrians, the differently abled, hawkers, children, senior citizens, cyclists and other road users. Apart from that, the road-widening designs promoted by the BBMP clearly defy all basic principles of urban planning and design, the National Urban Transport Policy, the National Urban Street Vendors Policy, the National Building Code as well as progressive circulars issued by the Ministry of Urban Development, Government of India. The designs are also in violation of laws such as the Karnataka Town and Country Planning Act and the Karnataka Preservation of Trees Act.

Realizing that the road widening programme is an irrational and illegal exercise and is only oriented towards advancing private modes of travel, Hasiru Usiru — a network of concerned citizens, community organizations and NGOs — has over the past few years systematically critiqued the project. Through representations, public consultations and meetings with the officials, Hasiru Usiru has also tried to engage progressively with the government and its agencies in order to develop more intelligent designs that enable better travel and transport modes for Bangalore’s population while also protecting its greenery, which is an integral part of the city’s heritage and landscape.

However, constrained by the lackadaisical approach of the various authorities who have ignored public enthusiasm and involvement, and have also prompted continuation of rampant tree-felling and road-widening works, Environment Support Group and others filed a Public Interest Litigation in the High Court of Karnataka in May 2008.

Hasiru Usiru is a network of organisations and individuals concerned about conservation of public commons, open spaces and greenery in Bengaluru. Over the past several years, Hasiru Usiru has served as a platform to explore various approaches to resolve urban challenges through a series of efforts including meetings, workshops, campaigns and public interest litigations. A key concern has been to develop sensitivity of implementing agencies involved in urban infrastructural development to involve public in decision making and ensure that projects developed are in conformance with law and equitable benefit all sections of society. Learn more at http://www.hasiruusiru.org.