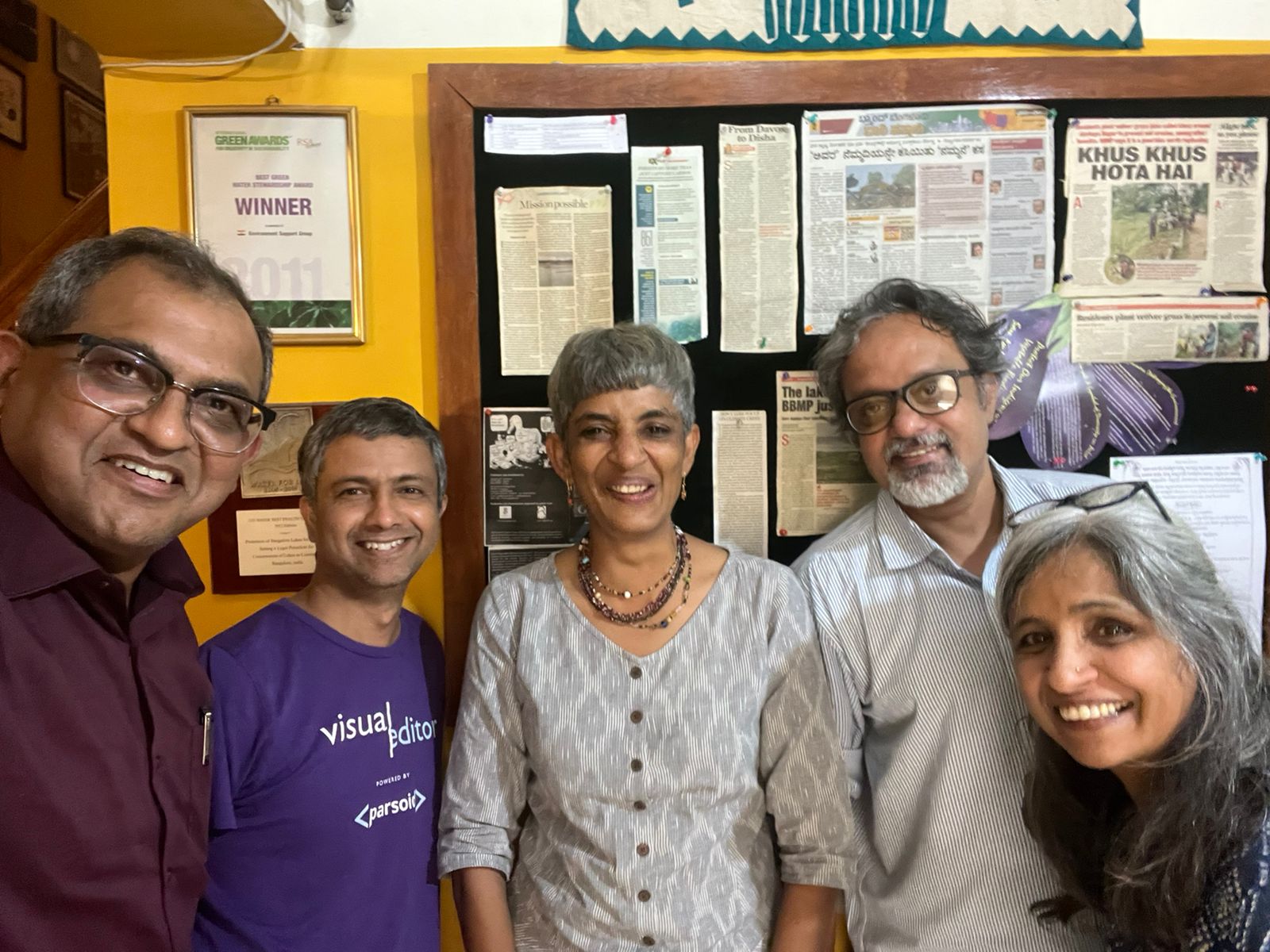 Bhargavi S. Rao graduated in Environmental Science and is a Botanist with an M’Phil degree in   Aerobiology from Bangalore University. She   also  has a post graduate diploma   in Journalism.   Her initial research experience was in the   areas of   Microbiology and Cell Biology and she has worked   at  the Microbiology and Cell Biology Department of the Indian Institute of Science, Bangalore. She has co-authored research papers in journals like Current Science and  Virology. She has had teaching experience as a lecturer in Botany and Microbiology at The BMS College for Women, Bangalore and also as a high School Teacher in Geography and Economics at the Sri Aurobindo Memorial School, Bangalore.

Her interest in Environmental and Social justice issues brought her to Environment Support Group (ESG), where she has led a wide variety of research and educational projects and campaign initiatives. She coordinated educational and training programmes at ESG with a focus on enhancing awareness and critical engagement in social and environmental justice issues. She has co-worked as Coordinator and Faculty of the India sector of the ‘Cities of the 21st Century’ and ‘Health and Community’ courses of the International Honors program, a study abroad program from 2002-2009, and as Co-Director of the India Centre of the Minnesota Studies in International Development, a division of the Learning Abroad Centre of University of Minnesota, USA (2014-2017).

Bhargavi has also been a guest faculty at the Simpson Centre for Humanities, Washington University, Seattle in 2013. She has been a co-speaker at many of the talks and workshops on the issues of Environment and Social Justice in Universities across USA, Germany, Vietnam and China. In recognition of her long-standing contribution in the voluntary sector, the Association for India’s Development has awarded her the AID “Saathiship” (2010-2013).

As Senior Fellow, Bhargavi is involved in overseeing research and educational efforts. As Trustee, she is also a member of the organisation’s Executive Committee. She has worked with Centre for Financial Accountability, Public Health Foundation of India and Azim Premji Philanthropic Initiatives.

Suprabha Seshan,  lives and works at the Gurukula Botanical Sanctuary (GBS) in the Western Ghat Mountains in India, a small conservation centre and community  concerned with plant conservation, habitat nurturance and nature education. At GBS a small team, consisting largely of rural women, employs skills that place them among the world’s most advanced plant researchers and conservationists.  Through a combination of scientific and traditional knowledge, this team has achieved successful plant conservation results for a deforested region, where many species face extinction. The 25-hectare sanctuary area has been restored to a far higher level of biodiversity. This involves thousands of plant species and animals, as well as nurturing habitat at scale, spurring collaborative action with groups in other parts of the Western Ghats that undertake restoration work. The same team has also created the School in the Forest, a rubric covering residential programmes and daytime exposure visits concerned with plant diversity, forest ecology and a life in  harmony with nature.

In her work, Suprabha honours traditional and indigenous peoples from rainforest areas through cooperative community based actions and mutual support. She also endeavours to educate students, land-based peoples, NGOs, government servants and forest activists on issues of ecological destruction and renewal. She envisions a “Green Phoenix,” or a movement that supports resilience and restoration to arise from the ashes of modern industrial culture.  Suprabha is a recipient of  Whitley Award in 2006 on behalf of the GBS team, and an Ashoka Fellow.

Suprabha also offers a talk on request titled Rainforest Etiquette in a World Gone Mad,  based on two premises: that nature is primary and that the planet is in peril. She draws on stories from her 27 years of experience in the forests of southern India, and the lives of plants, animals and humans she shares her mountain home with, as well as the environmental biography of their locality, the Wayanad plateau. She invites an exploration of a life in community with plants and animals and the two contrasting aspects of nature that ecosystem gardeners work with: resilience and fragility. The whole forest and its myriad beings can indeed return, but only when certain conditions are met and only with the right kind of help. This is critical: with the right kind of help, the whole forest, and all its beings, grows outwards again. 93% of the Western Ghats are already destroyed. The remaining habitats are fragmented badly. Her talk  calls attention to the vital beauty of these mountain forests and their precarious toehold in an India that annihilates the environment as its technocrats push for economic might.The questions that drive the Sanctuary’s work echo through her presentation: What must we do to bring the forests back? What is it to listen to the natural world? What do the plants have to say? Whom do we love? She is Managing Trustee of Munnarakkunnu Trust (MKT) which supports Gurukula Botanical Sanctuary, the Green Phoenix and the School in the Forest.

After earning two Masters degrees in Chemistry at the Indian Institute of Technology, Delhi, he decided to switch to working on tropical forests. He earned a PhD at the Indian Institute of Science, Bangalore, for his work on the community ecology of a tropical dry deciduous forest, in southern India. Thereafter he did post-doctoral research in the United States at the University of Georgia, Athens, the Smithsonian Tropical Research Institute, and the University of Illinois, Urbana-Champaign, working with a global network of tropical forest ecologists and research across several countries.

His professional interests grew not only out of a dedication to protecting species, ecosystems, and the environment, but also a deep interest in how ecosystems are organized and how they function across multiple spatial scales.

He studies how species diversity is organized and maintained at multiple spatial scales, focusing on plant diversity, plant life histories, environmental variation, spatial structure, demographic processes, dispersal limitation, and succession. He also works on generating knowledge to conserve species and habitats, ranging from the influence of fires and invasive species to understanding the anthropogenic drivers of landcover/land-use change in ecologically rich landscapes. While such research is of fundamental importance to ecology, he argues that it is also increasingly relevant for responding to current challenges in conservation emanating from habitat degradation and loss, as well as environmental change. A long-term goal is to integrate the drivers of ecosystem changes, development imperatives, and livelihoods to create a framework for sustainability.

He is the author of numerous publications in high-impact journals and actively provides mentorship to undergraduate, masters, and PhD students, as well as post-doctoral fellows in academic research.

Leo F. Saldanha is full-time Coordinator and also Trustee of ESG. He has gained wide-ranging experience in the areas of Environmental Law and Policy, Decentralisation, Urban Planning and a variety of Human Rights and Development related issues, working across many sectors for over a decade. He is a keen campaigner on critical environmental and social justice issues and has guided several campaigns demanding evolution of progressive laws and effective action. He has creatively supported various distressed communities to secure justice through public interest litigations and advocacy efforts, arguing as party in person several public interest litigations, many of which have resulted in remarkable judgments. He has a background in Environmental Science.

Leo has been invited as a speaker by organisations and universities across the world, and in August 2010 was invited to speak at the International Forum on China’s Rural Reform in the 12th Five-Year Plan Period organised by the  Chinese Institute for Reform and Development.  He assists various Government agencies in evolving law and policy relating to environmental justice. In recognition of his contribution to environmental and social justice efforts, Association for India’s Development, USA, made him their first AID Saathi.

In 2007, he co-authored “Green Tapism: A Review of the Environmental Impact Assessment Notification-2006” (2007) with team members at ESG. He has since co-authored “Tearing through the Water Landscape: Evaluating the envionmental and social consequences of POSCO project in Odisha, India” (2011), “Forfeiting our Commons: A Case for Protecting and Conserving Challakere’s Amrit Mahal Kavals as Livelihoods-Supporting, Biodiversity-Rich and Ecologically-Sensitive Grassland Ecosystems” (2013), and a comprehensive review report of Environmental Decision Making in Karnataka State, in particular the State Environmental Clearance Committee (2014), amongst others. His papers and articles have appeared in many leading new papers, journals and magazines. Recently, he has contributed papers in “India’s Risks: Democraticing the Management of Threats to Environment, Health and Values” (OUP, 2014) and “Living Rivers, Dying Rivers” (OUP, 2015).

Leo facilitates a variety of learning programmes on environmental and social justice concerns for a wide range of audiences. He was the Country Coordinator and Faculty of the “Cities in the 21st Century” and “Health and Community” courses of the International Honours Programme, USA (2002-2009) and has worked as Co-Director of the Minnesota Studies in International Development, University of Minnesota (2014-2017).

In recent years, Leo is a key participant in global research efforts, such as the Governance of Sociotechnical Transformations in collaboration with Harvard Kennedy School, Helmholtz Centre for Environmental Research, and similarly in the multi country Comparative Covid Response project led by Harvard Kennedy School and Cornell University.

Leo is full time Coordinator of ESG and a Trustee member of the Executive Committee:

Joe Athialy is Executive Director of Centre for Financial Accountability, New Delhi.  He has previously worked with the Bank Information Centre, Amnesty International, Narmada Bachao Andolan, and various other human rights and accountability institutions in leading positions. He is a key organiser on issues of accountability of International and National financial institutions with regard to the impact of their activities on human rights and environment.

Madhu Bhushan worked with Vimochana, meaning liberation, initiated in 1979 by women and men from within the Centre for Informal Development Studies (CIEDS)collective, that had come together in 1975 to seek a just, humane and creative society rooted in transformative politics. Vimochana grew out of the need for a public forum that would stand for organised resistance to the increasing violence on women and would be assertive in challenging the pervading apathy to the problems of women in the context of larger structures of violence and power. Madhu is a leading activist in India to assert the rights of women and disenfranchised communities.  She is currently an independent researcher. mail: madhu_bhushan2005[@]yahoo.co.in

Dr. Shirdi Prasad Tekur, MBBS, MCH, served as Captain in the Armed Forces Medical Core, and following his retirement worked to form Community Health Cell (now Sochara). He also worked in establishing Community Health Departments in varoius hospitals and medical colleges. He was a much sought after General Physician and Paediatrician, especially with his popular practice at New City Clinic in Jayanagar, Bangalore. He offered various public health and counselling services, and was a proactive participant in various disaster management and rehabilitation efforts. He was also widely consulted on Homeopathic and AYUSH systems. On 16 May 2021, he lost his battle with COVID. ESG is forever grateful for his extraordinary guidance.

Arthur Pereira is an active human rights activist in Mangalore and has successfully led the demand for fair compensation by Dalit and minority communities due to the Bajpe airport for over a decade now. He played a key role in mobilizing communities affected by the Airport expansion plan in Bajpe and also fought the expansion of the airport at the State High court and later at the Supreme Court on grounds of safety.  He is well versed on matters relating to Land Acquisition and has helped hundreds of farmers to benefit from the provisions of Land Reforms Act. His expertise also lies in building homes and rain water harvesting units to ease the struggle for water in major cities such as Bangalore, Mangalore and Mysore.