UPDATE: BDA has postponed the Public Hearing on the Revised Master Plan – 2013, without citing any reason, whatsoever. 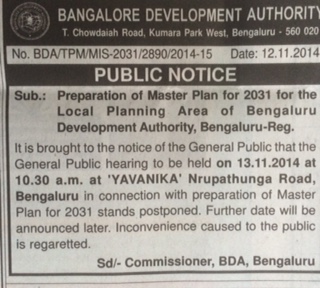 It is now important that we propose to the Government of Karnataka, in particular the Urban Development Department, the procedure that has to be followed in preparing a Metropolitan Plan as envisaged in the Constitutional 74th Amendment (Nagarpalika) Act, 1992.

OUR EARLIER CALL FOR ACTION, FOLLOWING WHICH BDA POSTPONED THE PUBLIC HEARING 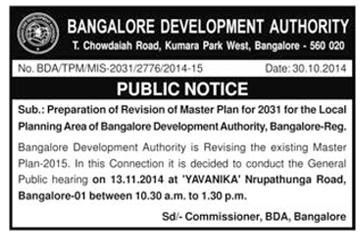 This small advertisement of extraordinary significance appeared in the papers a couple of weeks ago. It does not say much. Notice that no document or map is made available as a basis for debate and feedback. And if you review the BDA website, all you find about the 2031 Master plan is the minutes of a meeting soliciting Consultants to prepare the 2031 Master Plan held two years ago when Mr. Pradeep Singh Kharola was Commissioner. A particular item in the minutes is interesting:

2a. Please clarify whether the Expenses for such visit to be borne by the client or the consultants, and;‐

2b. Please confirm whether the city to be visited will be within India.

Expenses to be borne by the Consultant. Approx. 10 officials will go for such exposure visits.

One city within India and one city in a non‐ Asian country.

It is not clear from the minutes why approximately 10 officials of BDA have to be taken on a foreign jaunt at the expense of the Consultant to study “best practices in planning” abroad. It is also not clarified why a Non-Asian city has to be chosen.

What must shock us is that for a city that is now reached the 1 crore (1,00,00,000) population already, and not as anticipated two decades ago in 2025; a city which has difficulty providing drinking water to half its residents; a city where 50 lakhs vehicles (a vehicle for every two persons) ply daily making it impossible for pedestrians, street vendors and cyclists to survive; a city where garbage mismanagement has required the consistent intervention of the Karnataka High Court to set things right; a city where lakes continue to be encroached, even by the BDA, and requires Public Interest Litigations to seek High Court directions to protect them; a city where children now prefer to not play at all, unless their parents have the resources to access safe playgrounds in gated communities and elite clubs; a city where Public Interest Litigations have to be constantly filed to ensure even basis civic services, such as pedestrian safe zones, are provided; a city where more than half the green cover has been lost in the past decade alone, and BBMP and BDA show expenditure on tree planting, but not the trees; in such a city now, BDA plans to organise ONE Public Hearing, and that too, in a centralised location. Clearly, this “Public Hearing” has all the smackings of being a ritual.

The question is, if BDA has the power to engage in this exercise at all. Clearly, it does not, not after the Metropolitan Planning Committee has been constituted, whose Constitutional Mandate it is to prepare, confirm and regulate plans of Bangalore, every five years. Please review the links relating to MPC at: http://www.uddkar.gov.in/notibda

The Past is Present for BDA:

About a decade ago when the BDA was proposing the 2015 Master Plan, several of us asked similar questions. And got no answers. So we organised protests demanding: MAPS AND OFFICIALS MUST TRAVEL TO PEOPLE FOR CONSULTATION. Not one Minister or Senior Bureaucrat responded to our call. We welcome you to review the Statement we issued on 9th September 2008, which you can find at this link, and ask you, what has changed?

A decade later, the city is in a super-crisis. Real estate developers have recklessly thrown planning norms to the winds. The Joint Legislature Committee on Public Lands Encroachment headed by A. T. Ramaswamy has confirmed over 50,000 acres of public lands have been encroached in Bangalore; not by the poor, but by the rich and influential. We learn that corporate organisations demand infrastructure and resources to set up shop, but threaten to leave when asked to pay the costs; a situation that has forced many cities competing for investment to lower their planning standards. We learn of infrastructure projects planned to turn Bangalore into a “world class city” for which we all pay, but most of us cannot afford to use: Eg. Elevated roads. We learn that thousands of crores are spent on upgrading the Bangalore airport, used by about 40,000 travellers daily, but not even a few crores are spent on making basis facilities available to over 10 lakhs travellers who pass through the Majestic area. We are told that the only solution to traffic congestion is road-widening, potentially destroying homes of 5 lakhs of residents and thousands of businesses, when there is no evidence that it actually de-congests traffic.

What to do now:

Planning is not the art of drawing a few lines on a map by some consultants, officials, and possibly real estate developers, and to that our common future. Planning is the very essence of practicing democracy, where each of us has the Right to Participate meaningfully, with all the necessary information, with dignity, and with the intent of shaping our collective futures. Planning based on Public Participation is not a ritual, as the BDA is proposing to do.

So we ask you to participate in this “Public Hearing” tomorrow, but with the intent of telling BDA it has no business Planning our City. It is our Business to Plan our City, and it is the duty of the Metropolitan Planning Committee to assist us in this process.

If our futures and those of the next generation matter to us, the time to act is tomorrow. Whether you are a top notch corporate honcho, a retired Judge, a retired Senior Bureaucrat, a Businessman, Teacher, Street Vendor, Bank Official or just a Resident or an Elected Representative, it matters that you participate in the “Public Hearing” tomorrow to tell BDA:

“BDA has no business Planning our City”.

“It is our Right to Plan our City”

“It is the duty of the Metropolitan Planning Committee to assist us in Excercising our Right to Plan Our City.”

“Maps and Officials Must Travel to People. And NOT People to Ritual “Public Hearings””

We hope to see you tomorrow at Yavanika at 10.30 am on 13th November 2014, because we know What your City Becomes Matters to You and Your Chldren.

For any further details, please contact Akshatha at Environment Support Group on 26713559~61 (10 am to 6 pm) and via email: <akshatha@esgindia.org>