Around 120 people representing various progressive civil society organisations, trade unions, workers federations, resident welfare associations, artistes, street vendor associations, environmental groups, etc. came together in protest against Chief Minister Siddaramaiah’s 28th April 2016 decision to form the Bangalore Blue-print Action Group (BBPAG). Terming it as a Club of Rich and Famous, protestors demanded that the Chief Minister must defer to the Constitution of India and immediately scrap this BBPAG. The Chief Minister was asked to comply with the Constitutional 74th Amendment (Nagarpalika) Act, 1992 and set up the District/Metropolitan Planning Committees and make them functional within three months. The Chief Minister was also asked to immediately take steps to made Ward Committees functional as directed by the High Court of Karnataka over two years ago. 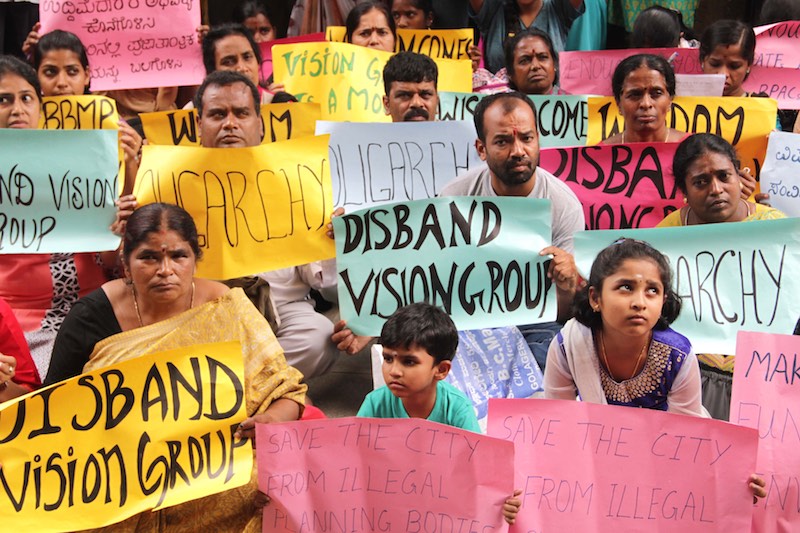 The protest took place at the headquarters of Bruhat Bengaluru Mahanagara Palike. Responding to the protests, Hon’ble Mayor Manjunath Reddy stated that he appreciates the meaning and depth of the concerns raised, and that he would communicate them to the Chief Minister. However, he declined to step out of the extra-Constitutional BBPAG stating:

This fear expressed by the Mayor clearly indicates how Mr. Siddaramaiah, celebrating his third year in power, is curbing autonomy and independence of Local Governments in blatant violation of the Constitution of India.

A copy of the representation received by the Mayor, endorsed by various progressive groups and organisations, is enclosed along with a note on the importance of implementing the Nagarpalika Act in totality. The main demands are:

We demand that the Karnataka Government must take immediate action to:

Forum for Urban Commons and Governance