A short documentary film on the struggle of agrarian, artisanal and pastoral communities to save grassland ecosystems in Challakere 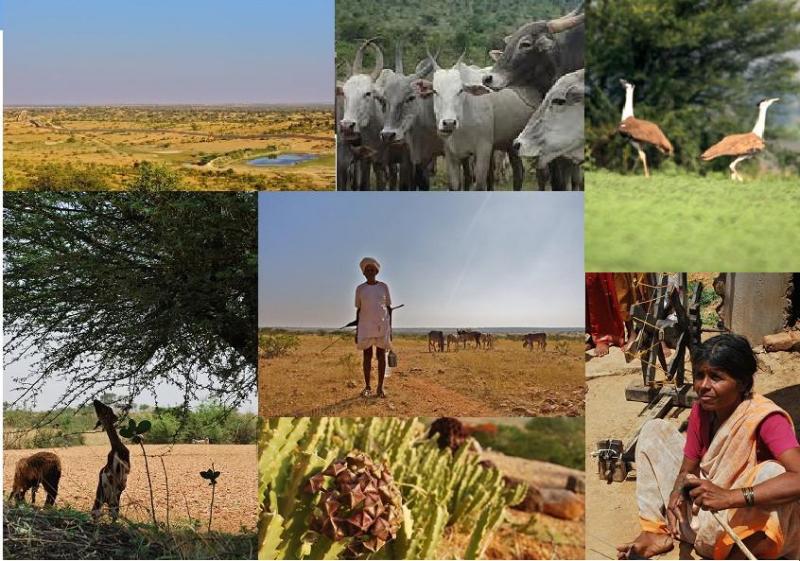 Please feel free to share and circulate this film.

In case you wish to organise a discussion on the film and the issues involved, please write to amkhs2013@gmail.com.

“Forfeiting our Commons”, a comprehensive report on the issue can be accessed at: http://tinyurl.com/nn8m47q.

For even more information: http://tinyurl.com/mjhdqar

The Governments of Karnataka and India secretively diverted about 10,000 acres of pristine grassland ecosystems in Challakere Taluk, Chitradurga district during 2007-13 for a massive military-industrial-nuclear complex. Local communities were rudely awakened to the diversion when they saw massive double containment high security walls came up all over the grasslands, thus completely blocking their access to their ancient grazing pastures.

These grasslands have been protected and conserved by local communities for hundreds of years as grazing pastures for an indigenous breed of cattle called Amrit Mahal; thus the name Amrit Mahal Kavals (Kaval=grazing pasture). The Kavals are also important habitats for the sustenance of the critically endangered Great Indian Bustard (only 200 individuals are left in India and Pakistan combined, making it the most threatened faunal species globally), Lesser Florican (about 2000 individuals are left on this planet), the highly threatened Black Buck and a host of other species of flora and fauna endemic to semi-arid grassland ecosystems. As semi-arid grassland ecosystems, the Kavals are a repository of biodiversity, particularly of grasses, that could help develop climate change resilient food crops. Over time, the Kavals have also supported rearing of various other local breeds of cattle and the famous Deccani sheep. The famous Challakere Kambli (blanket), much sought after by the Indian Army to protect soldiers from the biting cold of the Himalayas, is made from the Deccani sheep that graze these Kavals.

Beerappa is considered the God of the Kavals and is revered everywhere as the protector of pastoralists. Rich folklore is associated with the Kavals and the pastoral lifestyles, in which the feisty Amrit Mahal breed, used by armies over centuries to drag weapons and heavy equipment over long ranges, has a pride of place. Local communities are intricately linked to the Kavals in every way and the grasslands are not merely grazing pastures for them, they are sacred places where Gods and ancestors are worshipped.

At the time of independence, Karnataka had about 4,70,000 acres of Amrit Mahal Kavals spread across several districts. Today, only 30000 acres are left in the state, with Challakere alone accounting for over 15,000 acres; thus constituting the last contiguous stretch of such semi-arid grasslands in south India. Much of the rest of the Kavals has been systematically diverted to various industrial, urban and infrastructure projects over the past few decades. This overlooking or side-stepping various laws and judgments that demand conservation of Kavals, given their rich biodiversity and invaluable ecosystem services that they extend to pastoral and agrarian communities.

It is in the Challakere Kavals that a massive complex of military-industrial-nuclear projects is now being promoted. 4,500 acres of Challakere Kavals has been diverted for testing and manufacture of weaponised drones by Defence Research Development Organisation (DRDO) and it has been stated in Court that the these unpiloted aerial vehicle (UAVs) will be used to contain internal dissent. Bhabha Atomic Research Centre (BARC) has been provided 1800 acres to establish a Special Material (uranium) Enrichment facility to supply nuclear fuel to reactors and weapons production. Abutting these, Indian Institute of Science (IISc) has been provided 1500 acres to build a synchrotron, but the Institute has repeatedly said it simply does not have the resources for building such a facility. Besides, it does not know what to do with this massive allotment of land.

Further, Indian Space Research Organisation (ISRO) has been given 600 acres to build a space centre, though it is not clear exactly what it proposes to do. And shockingly, Sagitaur, a private entity, has been provided 1200 acres of the Kavals to build a solar park for a mere Rs. 33 lakhs (USD 50,000/-); it is learnt that the company proposes to outsource this land as real estate for other industries. It is also acknowledged that Indian Army proposes to locate a Brigade here and 10,000 acres of land will be acquired for this. In addition, a range of industrial, urban and infrastructure projects are proposed here to with investments from national and international corporations, all of which form a grand vision of building India’s first “science city”, also its first major military-industrial-nuclear complexe.

Local communities have consistently resisted the diversion of the Kavals. In additions to organising numerous protests, and frequently, they have knocked on the doors of the Karnataka High Court, Supreme Court and the National Green Tribunal. A key question has been why all are all these projects proposed in the Kavals, violating age-old wisdome and specific judicial directions to protect them for posterity. Communities have also asked how these projects is a water-starved area that can barely support current agricultural and drinking water demands.

None in power have responded to these concerns. Silence and secrecy has been the response over years. This even when the National Green Tribunal has specifically directed that State and regulatory authorities should not to allow any project activity unless statutory procedures of public involvement in decision-making are complied with. Blissfully ignoring such orders, the project proponents continue with construction activities. Local communities are deeply troubled that their cries for justice and fairness, and their continuing plight, are ignored by their elected representatives, administrators, intellectuals, media and the public at large.