The citizens’ movement opposing the current plans of the Bangalore Metro Rail Corporation (BMRCL) in the Southern Reach continued on Sunday morning at Lalbagh West Gate. Today’s protest march from Lalbagh West Gate to 32nd Cross, Nanda Road marked the fifth in a series of protests that was sparked by work conducted by the BMRCL on Apr 13 and 14, when they demolished 500 feet of Lalbagh’s perimeter wall and felled several trees inside the historic premises to make way for a station. Further south, the metro authorities have also started work on Nanda Road, where according to RTI responses, 323 trees have been marked for felling. Under pressure to respond to the ongoing campaign, in a press conference on Apr 18, BMRCL officials confirmed that trees will be felled on Nanda Rd (and not pruned, as they had earlier claimed), but that they would try to limit the number to between 200 and 300. 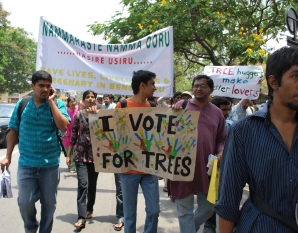 Rejecting these statements, hundreds of protesters participated in today’s event to demand that the authorities stop work immediately, hold public consultations on the issue, and re-design the Metro for South Bangalore. The assembly at Lalbagh West Gate grew to about 300 citizens, who waved placards, and shouted now familiar, but increasingly determined slogans like “Ulisi, Ulisi, Lalbagh Ulisi”, “Ulisi, Ulisi, Nanda Road Ulisi”, “Metro, Underground”, and “Beku Beku, Nyaya Beku”. Numerous pedestrians in the area and walkers coming out of Lalbagh West Gate joined in. Members of the organization Maraa provided energetic support on percussions, and as the protesters marched south along R.V. Road, Venky, member of Hasiru Usiru, sang a self-composition “Aiyaiyo Bengaluru”, a lament on the sad state of affairs of our city.

The protesters, marching from Lalbagh West Gate, reached 32nd Cross Nanda Road, where they met another set of placard carrying protesters – all women – who belong to Sanmati, a Jaynagar and J.P.Nagar-based women’s rights group. The assembly was addressed by several people, including Mr Narendra Babu, MLA, from Mahalakshmi Layout. He stated that based on feedback from Hasiru Usiru, during the special assembly session in Belgaum, he expected a bill to be tabled, which amended the Karnataka Open Spaces and Parks Act to pave the way for the Metro to takeover a portion of Lalbagh (the amendment would also clear the way for similar takeovers in Cubbon Park). He was shocked that bill was not introduced, and instead an ordinance was promulgated. He said that the elected MLAs represent 5 crore Kannadigas, and it is shocking that the government went ahead and changed the act without consulting the assembly. He called this whole process state terrorism, and that he would like to see BMRCL to explore all alternatives for saving Lalbagh and Nanda Road, while articulating his full support for the citizens’ movement.

Dr. Rajeev Gowda, professor of Economics and Social Sciences, IIM Bangalore expressed his sadness and consternation that it has come to a point that the city is being asked to sacrifice Lalbagh and Nanda Road. He was vehement that alternative designs exist, and suggested that citizens move the protests to the site of the BMRCL offices and that a gherao could be organized. Leo Saldanha, of Environment Support Group stated categorically that the process by which the metro project is being implemented is an insult to democratic sentiment, citing lack of political and democratic oversight. Even statements made by the Transport Minister, Mr Ashok, that the Metro work on the southern reach would stop pending public consultation, have gone unheeded by the BMRCL. He expressed his shock that such major decisions, such as granting land of Lalbagh for construction purposes, have never been tabled in the assembly. He also said while the judiciary has refused to vacate a stay for acquisition of private properties on R.V. Road for metro construction, the BMRCL is proceeding with impunity. He also mentioned that tree-cutting continues unabated – a huge branch of a rain tree was cut near 40th cross on Nanda Road on the night of Apr 25th without permission of the Tree Officer.

The ongoing campaign to save Lalbagh and Nanda Road has also inspired some individuals to come up with innovative protest methods. Ricky Kej, well-known music director (Kannda movies “Accident”, and “Venkata in Sankata”), has composed a jingle, which supporters of the campaign have started using as a mobile ring-tone.

Vinay Sreenivasa, a volunteer of Hasiru Usiru, announced that in the coming week, the petition endorsed by over 2,500 people would be presented to the Governor and the Chief Minister of Karnataka. The Governor would be requested not to renew the ordinance due to expire in a few weeks. He also announced that a Public Meeting would be held by Hasiru Usiru on the Metro and its impacts, alternatives available for the southern reach, the illegalities of the project implementation, etc. The Metro officials and connected departments would be invited to this Consultation 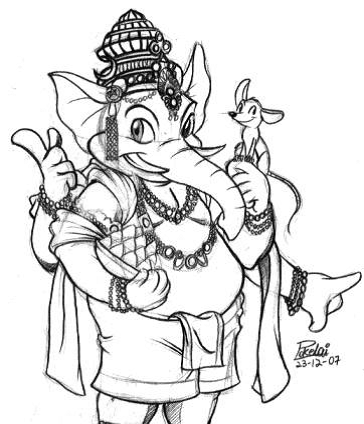 Some Reasons Why You Should Consider Donating To ESG