A documentary by Indu Krishnan

“Good Guy. Bad Guy”, a film by Indu Krishnan, is a poetic interrogation into the life of Zakhir who picks rags for a living and dreams big of making movies about life in Bangalore. But life is unpredictable and nasty.

Environment Support Group hosted the screening of the documentary at Suchitra Cinema and Cultural Academy on 26th April 2018 to a packed theatre.  The screening was graced by Justice Mr. Sunil Dutt Yadav of the High Court of Karnataka.

Critical apprecation of the film are enclosed. 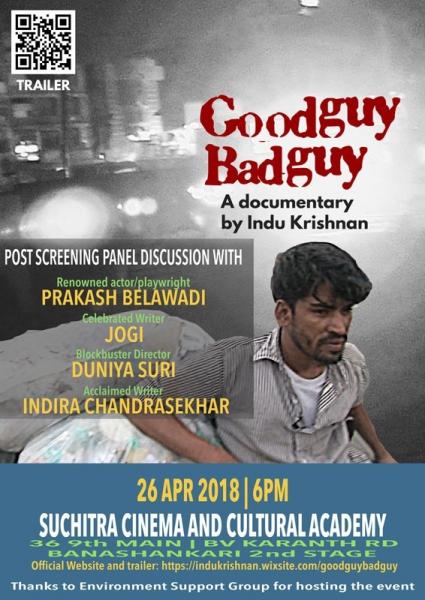 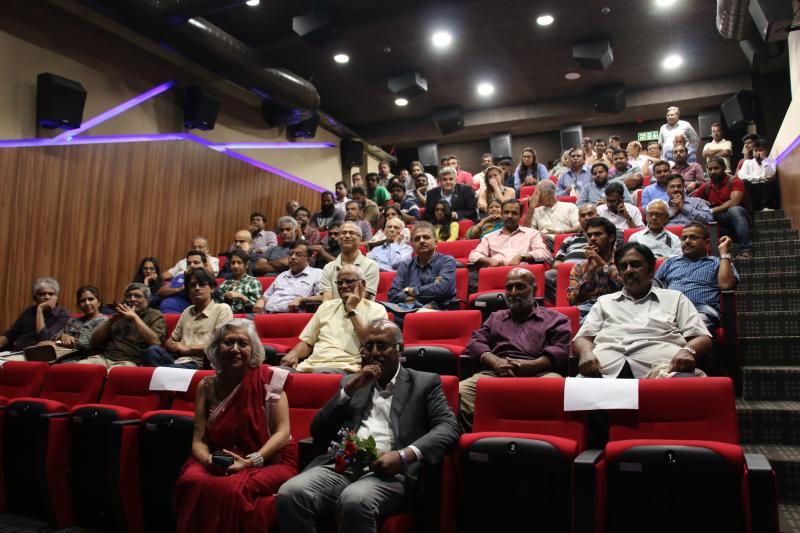 Film Director Indu Krishnan with Justice Mr. Sunil Dutt Yadav of the Karnataka High Court before the commencement of the film screening. 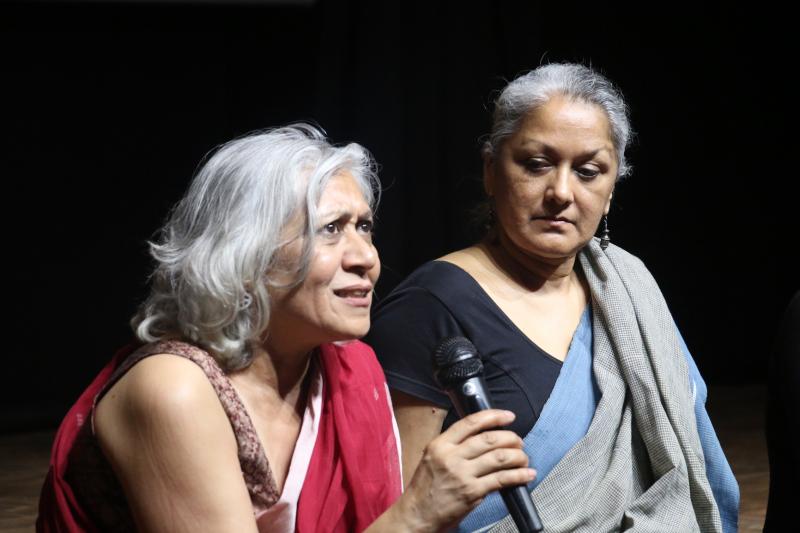 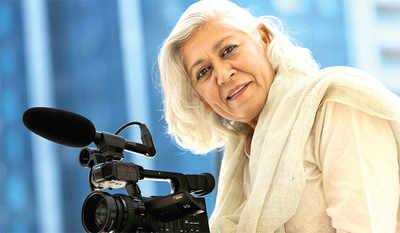 Documentary filmmaker Indu Krishnan’s latest endeavour tells the story of Bengaluru through the eyes of one of its most reviled, but resilient category of residentsThere’s a scene in Indu Krishnan’s Good Guy Bad Guy, when she realises that her protagonist – the gentle, good-natured Zakhir – is using what he believes are her ‘filmy connections’ to try and get a meet with the film director Ravichandran. It is followed immediately by a moment of self-reflexivity, when Krishnan realises that she might have done the same, had she been in his place. And so, deftly, the opportunist and the expansive meet; the underhanded and the aware co-exist. A little bit like Bengaluru, it would seem. In Krishnan’s 80-minute documentary film – what she calls her “love song to Bengaluru” the city comes to life through Zakhir’s story. And what a story his is. In the span of five years, he goes from being a ragpicker to working at a piggery, recycling waste and plastic, doing odd jobs, being convicted on murder charges and then being acquitted of them. Through it all, Krishnan holds up a mirror to the city, as it evolves and alternates between offering a home and having a heart and whipping life and love out of its denizens through sheer violence and institutional failures.When Krishnan found out that the compassionate Zakhir she met at Cubbon Park when he was feeding monkeys “with care, mindfulness and affection, almost as a sadhana”, had been jailed for apparently bludgeoning someone to death with a stone over an argument over a mobile phone, she knew something didn’t fit with the persona she had encountered. “I had been chatting with him and he told me about his dream to make a movie about Bengaluru as a person from the ground up. I realised then that he had the same idea as me, and he might actually do a better job. He had the psycho-geography of Bengaluru, mixed with Hindu mythology. On a semiotic level he had put some really good ideas together.” It got her thinking about the “interior life” of these people we see every day as they walk past us, carrying our plastic and our waste. “When we look at a poor person, the immediate reaction is to put them in a box. Their economic label becomes their definition, and they have no personhood left.” When she found out about his arrest, it became obvious to her that following him through that process would “tell the story of Bengaluru”. Intensely invested in Zakhir’s story, Krishnan even pays his bail, much to the chagrin of everyone around her. She felt conflicted and ambivalent about doing so, asking herself “gnarly questions” about whether she was crossing the line; whether she was doing this for selfish reasons, just to be able to complete her film. Eventually, her desire to give him the benefit of doubt won – Zakhir was out of jail on bail, and the film continued. Violence is a big theme in Zakhir’s life – and by extension, in Bengaluru. He drinks himself to sleep – sometimes on the street, sometimes at the temple premises opened up for homeless people like him – at night to blunt the fear of getting killed, or picked up by the cops. He runs away from a violent home where his father beat him and his family wants to tie and proscribe him to a certain idea of work and life. His idea for a film – which forms the crux of his dreams for a better life – features an angry monster. The city through his eyes is a complex place – one that has its multiculturism intact in Jolly Market, where he works alongside a happy community of Tamil and Telugu-speaking Hindus and Muslims. It’s also a dystopian place full of deprivation, making it hard for anyone who isn’t part of the conspicuous consumption around us to breathe. There is a resigned anger in the way Zakhir tells Krishnan: ‘Look at the monkeys, they are free. Humans are not’. And there is philosophy and poetry too, in his network of friends that looks out for each other, like his friend Uma.

Eventually, with Krishnan’s help, Zakhir does secure a meet with film director Duniya Soori, who himself came from the slums. He shows him his script – dictated to a friend who writes it down for him – and shares recordings of songs he composes on his mobile phone. In those interactions we see a glimpse of the hope the city offers to someone who has been buffeted around by society. “Everyone is trying to grasp what Bengaluru is, and wants to tell their version of the city,” Krishnan says of Zakhir’s filmy aspirations. The desire for the city’s overwhelming escape into cinema, she also believes, has something to do with Bengaluru having “a bit of an inferiority complex”. “There’s a sense of trying to find the original Bengaluru through metaphor; of wanting to be premier like Mumbai; a sense that it’s a city run by everybody else.”Still, in the end, Zakhir is resilient. How much of Zakhir is Bengaluru, and how much of Bengaluru is Zakhir? It’s hard to tell. Krishnan believes he is iconic, “almost a metaphor for the city”. In many ways, Zakhir is the Bengaluru that is forgotten, invisible and stepped on. “But it’s also creative, has vitality and is gentle: look at how much Zalhir loves plants and animals! Would you imagine when you looked at a person like that that he has that kind of interiority? People like him have rich inner lives in this chaotic, sliced-and-diced-up city. They still have coherence.”

Which is why they cannot be confined to traditional parameters of morality – a question asked by the very title of the film. Morality, as Krishnan says, is often “a luxury”. It’s easy to be ‘good’ when your food, home and sleep is taken care of; it’s easy to be ‘moral’. “But when every system has failed you, continues to fail you and there’s so much corruption, what expectation can society have from you to be good or honest or moral? The question is in the title.”

The latest news and updates…

Get instant notifications as they happen

You can manage them anytime using browser settings

Churning The Earth: The Making Of Global India 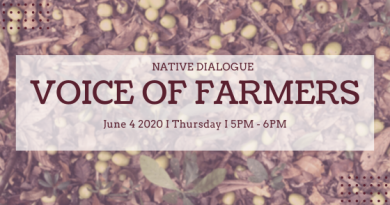