Engaging Critically with the Concept and Reality of Civil Society

Watch this talk by Jai Sen on Youtube: https://youtu.be/rnHI3yYmYvo 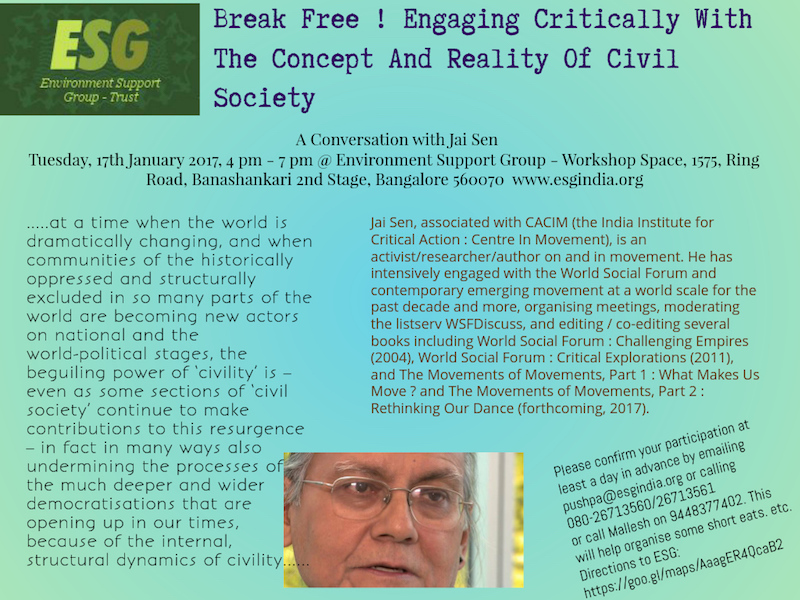 A Brief Report of the talk

An architect by training, Jai Sen came to be an activist in the mid 1970s as a natural by-product of observing the politics of architecture and housing. He looks at institutions such as World Bank, IMF and WTO as part of an emerging global society. In this new world structure, geography and national boundaries are dissolved.

He critiques the assumption that global government is good for human rights. Rather than giving global civil society automatic impunity, he questions the social role of these organizations, looks at their histories and asks whether they are embedded in justice. He sets out to define civil society and offers a counter to civility, which he terms ‘incivility’.

Sen argues that structural injustices such as capitalism, casteism, racism, and sexism all operate through a construct of civility. The term civility is all-pervasive. From a young age, we are inculcated with a notion of civility that defines good behaviour, proper manners, the right way to dress etc. Civil society has a monopoly of knowledge production. Through textbooks, schools, law, fables, and fairytales, civility establishes a hegemonic discourse. But whom does civil society include? And who remains on the fringes? Sen talks about this process of interrogating civil society as the unveiling of a mask. It is behind a mask of goodness that civil society maintains power structures.

Civil society is far from neutral, but instead governed by those who claim to be part of it. It engages in exploitative and ‘uncivil’ behaviour on many levels, from slavery to genocide. The treatment of minority groups such as Dalits, Adivasis, and women reflects ‘uncivility’. Civil society, invariably pro-State, joins hands with governments to define concepts of ‘civilized’. It even determines who and how a citizen should be. Sen argues that the unveiling of civil society is crucial in order to dislodge its exploitative structure, and ‘incivility’ is the means to do so.

Sen defines ‘incivility’ as a sort of civil disobedience, wherein marginalised sections of society act as insurgents in order to create their own terms of dignity and what constitutes social structure. Movements, which we attribute to missionaries and human rights, arose from acts of disobedience, not civility. Sen cites James Baldwin, Ambedkar, and Gandhi as examples of incivility. He points to the irony of Abraham Lincoln, who was once a slave owner, but ended up propagating the emancipation of slaves. The civil disobedience of women against hegemonic patriarchy has called to attention domestic labour as labour. In all of these instances, incivility was necessary in order to create a new vocabulary that can stand against the injustices of civil society.

Civil society, as it is used today, must be understood as a deliberate term that was unleashed by governments and global institutions such as the UN. The term is used as a means of control, in order to keep rebellions at bay. However, Sen urges us to interrogate the term civil society, rather than getting rid of it. It is the only way to unmask the structures of power that operate behind the veil of civility.