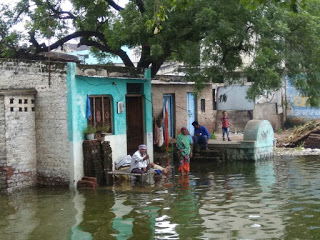 Prime Minister Narendra Modi is keen on celebrating his birthday by inaugurating the Sardar Sarovar Dam, even though rehabilitation is far from complete. The dam gates have been shut and water is being diverted from other dams into Sardar Sarovar Dam to raise water level in time for this celebration. This birthday celebration will drown at least 40000 families who still remain in the submergence zone, as they have not been rehabilitated.

Please immediately urge the President of India to intervene and stop this carnage. The Petition is accessible online at: http://chn.ge/2wx4l1Z. You may also send in your endorsements to harsh@esgindia.org, and these will be compiled and sent to the President. Please include your full name, address and also affiliation (if you so prefer) when you endorse the letter.

In solidarity with communities struggling for justice in the Narmada Valley, and in support of Narmada Bachao Andolan.

Letter to the President of India:

Indian Prime Minister Narendra Modi desires to inaugurate the controversial Sardar Sarovar Dam across the Narmada River on his birthday, 17th September 2017. In preparation, the dam gates have been closed and water level has been steadily rising in the submergence zone, particularly in Madhya Pradesh state. Water is even being diverted to Sardar Sarovar Dam from other unfilled dams to prepare for the so called Narmada Mahotsav on PM Modi’s birthday.

Forty thousand families continue to live in the submergence zone of the Sardar Sarovar Dam as they have not been rehabilitated as per the Narmada Water Disputes Tribunal Award and other relevant judgements. Their livestock, agricultural lands, forests, homes and everything that belongs to them is being drowned in town after town, village after village, across the Narmada Valley. Their rehabilitation remains incomplete despite various assurances of state and union governments and the continuous monitoring of rehabilitation by the Supreme Court of India. In fact, thousands of applications for rehabilitation remain unopened before the Grievance Redressal Authority.

To close the dam gates and fill the reservoir to celebrate ‘Narendra mahotsav‘ (festival of Narendra), causing the forcible drowning thousands of families in the process, is one of the greatest human rights violations in the history of free India. Such bizarre and colossal abuse of power is unheard of in any democratically governed country.

As citizens, we simply cannot stand by and watch this unprecedented carnage of drowning the lives of fellow women, men, children and the elderly of our country. We cannot allow Prime Minister Modi to celebrate his birthday at the cost of fundamental rights and freedoms of people, particularly those who have lost everything for the dam.

Your Excellency President Kovind, we believe it is your duty as the First Citizen of India to step up and join us in stopping this massive and unprecedented abuse of executive power. Therefore, we urge you to immediately take appropriate action and stop Prime Minister Narendra Modi from celebrating his birthday by inaugurating the Sardar Sarovar Dam. The dam, which has destroyed thousands of acres of forests, displaced hundreds of thousands of people and ruined the holy River Narmada, can be inaugurated in a secular manner once rehabilitation is complete.

We urge you to immediately initiate corrective action with due dispatch, as the continuance of lives of tens of thousands in the submergence zone now hinges on your right action.