Mr. Biswanath Sinha, Joint Secretary of Union Ministry of Environment, Forest and Climate Change (MoEF&CC) was required by demands from various representatives of civil society organisations to cancel its “Stakeholders Consultation on Draft Waste Management Rules 2015” organised in partnership with Confederation of Indian Industry (CII) at Le Meridian Hotel in Bangalore today. The decision was taken when it was pointed out that the Ministry had wrongly, perhaps even illegally, outsourced an essential executive function of rule formulation (that too of delegated legislations), which is the exclusive preserve of the Government, to a corporate lobby group, and that the entire consultation process smacked of an illegal and undemocratic exercise from the very beginning. 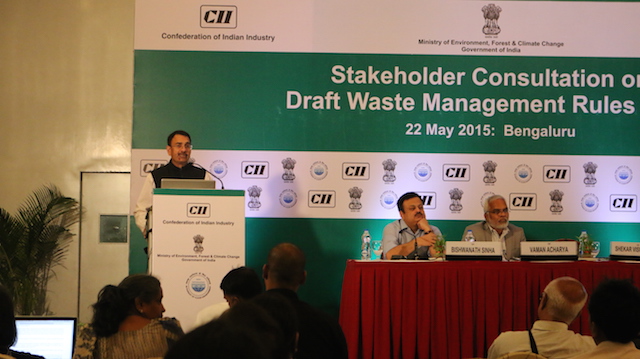 Background: In April 2015 MoEF&CC put out the Draft Municipal Solid Waste Management Rules, 2015 for public comments. It was not clear from the website release if the Draft Rules were notified in the Gazette as open for public comment for a period of 60 days. However, what was categorically stated was that the Ministry was undertaking a “National Consultation Programme” on “Draft Waste Management Regulations, 2015”, and that the same would be held in Delhi on 1st May in Mumbai on 8th May in Bengaluru on 22nd May and Kolkata on 5th June. The Ministry in its release also stated unequivocally that the “National Consultation Programme is being organised in partnership with the Central Pollution Control Board (CPCB), Federation of Indian Chambers of Commerce of India (FICCI), and Confederation of Indian Industry (CII)”. The Ministry further emphasised that with “Government’s special impetus on Clean India Mission in consonance with Make in India and Ease of Doing Business these amendments are timely endeavour towards meeting these initiatives of the Government”. The overall consultation programme, the Ministry informed in its web release, was so “(a)ll invited stakeholders may ensure their participation in National Consultation Programme provide valuable inputs for effective outcome in the form of prolific legislations on wastes” (sic; emphasis supplied).

Subsequent to this Release, the Ministry did not issue any public advertisements inviting the wide public to engage in the National Public Consultations. Instead, CII and FICCI selectively invited industry representatives or pro-industry lobby groups to the consultations held in Delhi, which was presided over by Indian Environment Minister Mr. Prakash Javadekar, and to the one held in Mumbai. Nowhere on the Ministry’s website is there any mention that any other Consultations would be held in formulating these Rules, barring those held by CII and FICCI for the MoEF&CC. 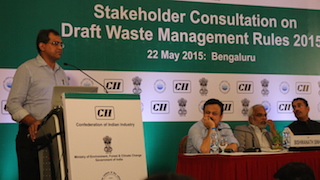 Mr. Leo Saldanha of Environment Support Group explaining the illegalities of the Consultation held by CII for MoEF&CC

Bangalore Consultation organised by CII: For the Bangalore consultation, that CII organised at a 5-star hotel, email invitations were sent out and participation was restricted to invitees who registered priorly. This invitation exercise was undertaken with such secrecy that not even the Solid Waste Management Expert Committee Members constituted by Bruhat Bengaluru Mahanagara Palike (BBMP) were invited. Besides, not one of the Petitioners who have promoted Public Interest Litigations before the Karnataka High Court advocating progressive, socially just and environmentally viable waste management strategies were invited to the National Consultation. As there were no public advertisements, there was no way any member of the public or any elected representative from any of the four southern states, for whose benefit the Bangalore Consultation was ostensibly held, could participate and that too meaningfully.

Soon as Mr. Shekar Viswanathan, Chairman, CII-Karnataka welcomed Dr. Vamana Acharya, Chairman, Karnataka State Pollution Control Board and Mr. Bishwanath Sinha of MoEF&CC to the dias, Mr. Leo F. Saldanha of Environment Support Group raised his objections to the manner in which the Ministry was conducting statutory consultations. Mr. Saldanha said that the Ministry has outsourced its essential function of rule formulation to a corporate lobby group which is not only illegal but also unconstitutional. “Nowhere in the Constitution or the Environment Protection Act is there a mention of CII as a statutory authority to hold National Consultations on rule formulation” he asserted. “Would anyone take seriously the nation-wide public consultations that former Environment Minister Jairam Ramesh held on the contentious issue of GMO, were it coordinated by CII with funding from Monsanto?”, he questioned. He asked Mr. Sinha to clarify the terms on which the Ministry had outsourced its essential functions to CII and divulge details of the funding involved, and demanded that the Ministry should re-organise the Consultations on its own or through the Pollution Control Boards or State Department of Environment, all of who were absolutely competent and capable of organising Public Consultations.

Ms. Bhargavi S. Rao of Environment Support Group said that CII officials resisted her entry into the forum even after she had priorly informed she would be participating as a Petitioner on the Waste Management case before the Karnataka High Court. “Besides Petitioners who are advancing reform of these critical Waste Management laws being kept out, MoEF and CII had ensured that not one of the representatives of communities impacted by waste dumping been invited to these Consultations”, she asserted.

Mr. Ramesh, Member of the Ramagondanahalli Panchayat, and a PIL Petitioner too, asked Mr. Sinha if he even appreciated how insensitive the Ministry is to their realities. His community suffered due to the impacts of municipal and hazardous waste dumping, and instead of ensuring that such communities were consulted, “the Ministry has trusted CII which works for companies that damage public health by their pollution”, he said. Mr. Srinivas, Member of the Mavallipura Panchayat, and also a PIL Petitioner, asked Mr. Sinha to explain how at all the Ministry could “think of organising such Consultations in 5-star hotels without any intimation to the public, and that when there is such a poor record of implementation of the existing rules. Where is the White Paper on your performance on existing rules” he demanded. Mr. Balan, a trade unionist and representative of Pourakarmika Support Group wondered aloud if “Mr. Sinha even appreciates the gravity of what it means to outsource statutory rule formulation to a corporate lobby group! Is the Government of India being run by CII?” he asked. 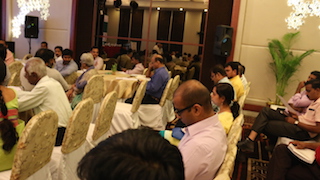 “Such legitimate questions must be answered before the process can move forward” argued Mrs. Wilma Rodrigues of Saahas. “The National Consultation must be repeated so that all publics can participate and on the Ministry ensuring that the public forum is organised by a neutral governmental body,” she demanded. Mr. Bhoga Nanjunda of the CIEDS Collective wanted to know if the Ministry appreciated the deep and wide ranging ramifications of such legislations and asked “What indeed is the difficulty in being transparent and accountable to the public?”

Mr. Bishwanath Sinha attempted to justify why the Ministry had partnered with CII and FICCI to organise these Consultations, including claiming that this was the first of many to come, and that there would be separate consultations that would be held with civil society groups. But none of this convinced the audience who demanded that the Consultations must be repeated by the Ministry or by any neutral government body, such as the Pollution Control Board or Environment Department and with the procedures of the Principle of Prior and Informed Consent fully complied with. In the end, not being able to provide any convincing response to the questions on procedure, Mr. Sinha declared that the “National Consultation in Bangalore is called off”.

All civil society representatives demanded that MoEF & CC must hold these National Consultations in a public venue (not a 5-star hotel), with sufficient advance notice by way of public advertisements, without any deterrent to free public participation, and in a transparent and accountable manner.

Note:  A Dropbox link to the audio recording of the CII sponsored MoEF consulattion at Bangalore can be accessed here (32 MB file: May require prior subscription to Dropbox)