A wide range of people from all over Bangalore, representing a range of organisations and communities from within the city, peri-urban areas and villages affected by waste disposal, were present when Justice Mr. N. Kumar (Retd.), Former Judge of the High Court of Karnataka, released: “Bangalore’s Toxic Legacy Intensifies: Status of Landfills, Waste Processing Sites and Dumping grounds, and working conditions of Pourakarmikas”, a report prepared by Environment Support Group. This report provides a critical framework to evaluate the progress achieved in advancing environmental and social justice of communities impacted by waste handling and disposal, and is prepared to support ongoing efforts to assist Hon’ble High Court of Karnataka in addressing crises in solid waste management based on concerns raised in various Public Interest Litigations (PILs).1 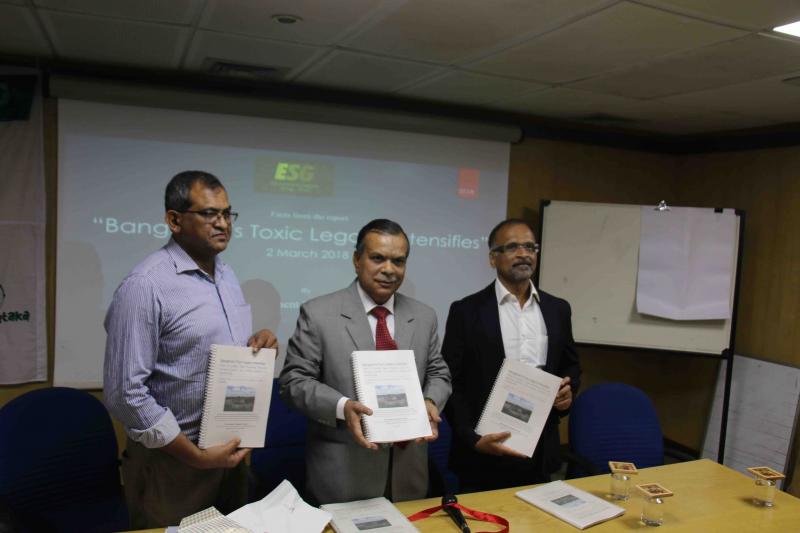 Mr. Leo F. Saldanha, Coordinator of Environment Support Group, welcoming the gathering, shared that various voluntary organisations and contaminated communities were raising serious concerns over the abysmal state of waste management and its dangerous and irreversible impacts. While this was being done over decades, there was weak response from the civic administration and regulatory agencies, and a state of despondency had set in. It is about this time that the Karnataka High Court took note of several PILs that sought a quick resolution to the problem. But the situation was complex. On the one hand was the challenge of transforming social behaviour towards waste and the adverse impacts on those who handled waste or were impacted by its disposal. On the other was the need to push civic and regulatory systems out of inertia and bring them to work collaboratively with the wide public towards delivering long lasting solutions which would not burden future generations with the toxic impacts of our waste. Justice Mr. Kumar who addressed concerns raised in these PILs along with Justice Mrs. B. V. Nagarathna, succeeded in guiding efforts to resolve this vexatious situation into a clear solution pathway. This was done over 5 years, involving 63 hearings, and the proces also involved Judges visiting various landfills and processing sites. The result was a series of unprecedented and historical Judicial orders, methodically passed to push Bangalore to tackle its waste management problem in progressive ways. This process oversaw and helped formulate India’s Municipal Solid Waste Management Rules, 2016, which has now has become a model for the world to emulate. 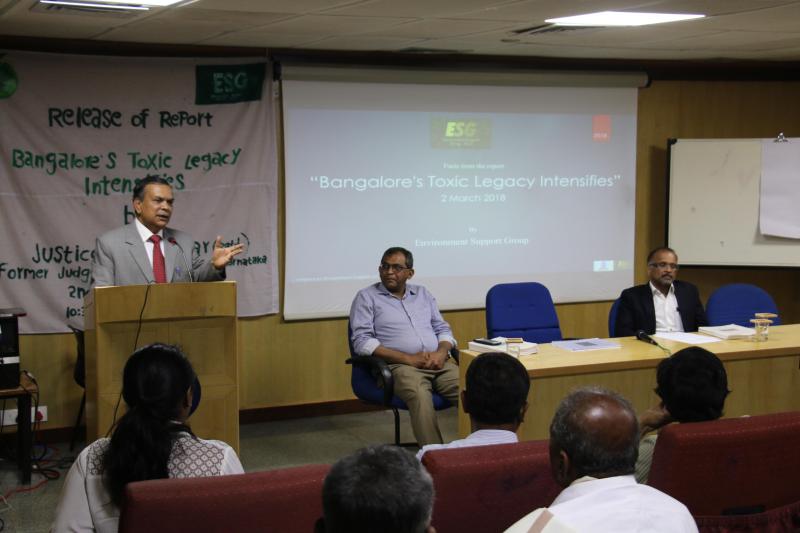 Releasing the Report, Justice Mr. Kumar highlighted that the public must play a dynamic role in advancing such public causes and bring them to the attention of the Judiciary. This particularly when civic administration and political establishment fail to respond to such a major public crises. “Things don’t happen overnight”, he cautioned. “But if you don’t raise your voice, no one in this democracy is going to hear you”. Quoting Swami Vivekananda, who had said “They alone live, who live for others. The rest are more dead than alive”, Justice Kumar highlighted the importance of living in ways that contribute positively to the wider society, and to not damage the chances of others to also live. He advised against expecting magical results to solutions proposed as “society is yet to get adjusted” to the idea that “one must deal with their waste themselves”. Which is why even a simple task of enforcing segregation of waste at source, which is standard practice in much of Europe, becomes a very complex problem in India. But, he suggested, the orders he was able to pass as Judge of the Karnataka High Court are “irreversible”, and “segregation of waste at source, and managing waste in each and every ward, and not resorting to dumping in surrounding villages”, is here to stay. 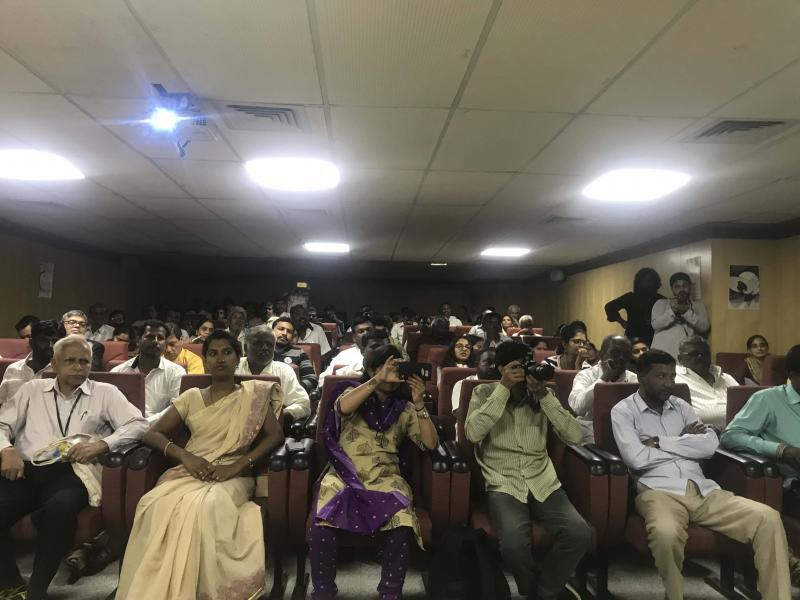 While Judiciary responds to such challenges and passes directions, the media plays a critical role in educating the public about these reformative processes, Justice Kumar said. Media has a critical role in reporting with caution, especially when “there are many lobbies” which promote highly questionable solutions, such as Waste to Energy plants, which have not been proven to be solutions to our garbage crisis. Thus, the media must not play into the agenda of vested interests. In the same way, voluntary organisations have to work in bringing to light complexities of such problems before the Judiciary, even while working to improve civic administration and in educating the wide public. The report prepared by ESG acts as a foundation in ensuring the extent to which judicial directives were implemented, and in building a context for the way forward. But this demands patience and persistent effort. It is here that the Ward Committees, which have finally been constituted as a result of Judicial directives, play a crucial role in the reformative process, he said. In effect, this required that we all contributed to making the entire system work, for even one missing link would effectively bring down the overall effort of securing a clean and healthy metropolis for all, Justice Kumar concluded. 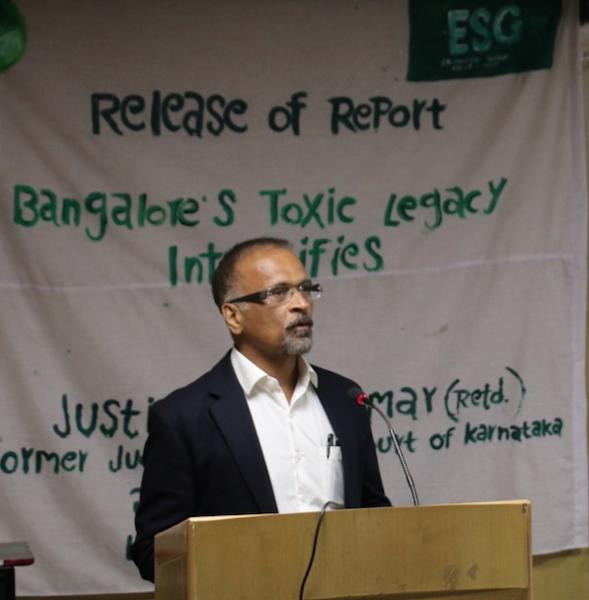 Mr. Mahendra Jain, IAS, Addl. Chief Secretary heading the Karnataka Department of Urban Development admitted that it is from such reports that the Government realises the yawning gap that exists between what is expected of it and what it has not delivered. He gratefully acknowledged that the directives of Justice Mr. N. Kumar and other Judges of the Karnataka High Court had pushed municipal solid waste management in a progressive direction. These directives have now become a model for the rest of the country, he said. While Singapore and Scandinavian countries, which have scarce land, and/or labour, and are also resource rich, handle municipal waste by incineration, and thus convert waste to energy, he admitted that these models may not be suitable for India. Instead, Mr. Jain said, we must follow the Refuse, Reuse, Recycle and Rethink ‘waste’ process. In so doing, the directives of the Karnataka High Court to segregate waste at source and compost and recycle locally, provided the most profound way out of what is a massive and increasingly complex problem. 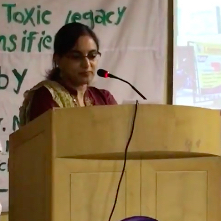 Dr. Swetha Rao Dhananka, an urban sociologist consulting with ESG and a co-author of the report, explained why and how the research and reporting exercise was undertaken, and its outcomes. She suggested that the report serves two major purposes. It is an explorative exercise in evaluating the progress achieved in response to the High Court directives, and could be built upon by various groups and communities in bringing empirical evidence to support socially transformative ideas into action. The report also serves as a touchstone in evaluating how much progress has been made since the 1976 Report of the IPD Salappa Committee “On the Improvement of Living and Working Conditions of Sweepers and Scavengers”. What the ESG report reveals is that the gaps are yawning and systematic and collaborative efforts are demanded in closing the gaps. The study reveals that the Pourakarmikas, who are mainly women and very poor, are a highly neglected lot and they are forced into conditions of enslavement just to hold on to a most hazardous job, that provides them no respite, no leave, no medical benefits and no life outside of waste handling. Social response must factor in their incredible contribution to the upkeep of the healthy environment of the city. 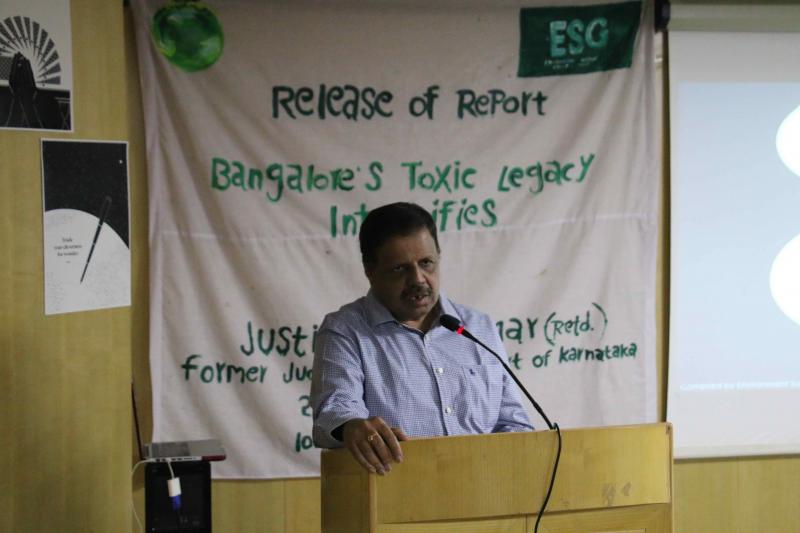 Dr. Apoorva Patil of ESG, shared the results of a survey assessing the impact on the health of villagers around the Mavallipura landfills. The worst consequences were mainly borne by little children and women. The heavy health costs incurred was exacerbating their weak economic conditions, and forcing them to suffer rather than seek help. Not much has been done to address their worsening situation despite various judicial directives, Apoorva shared. The water analysis conducted by ESG over the past decade in Mavallipura reveals that the leachates contain various chemical contaminants, especially deadly heavy metals, and in concentrations way beyond permissible limits. These were finding their way into downstream canals, wells and bore-wells, and eventually reached the Arkavathy river. Water in wells around Mavallipura is now coming out black.

Mr. A. Ramesh, Senior Environmental Officer of Karnataka State Pollution Control Board cautioned that municipal waste was receiving a heavy stream of highly infectious and toxic biomedical waste, and all this was ending up in quarries, in landfills and even in ponds, streams and lakes. This is a highly dangerous situation, and needs to be tackled on a war footing, he shared. Dr. Sandhya, Nodal Health Officer of Bruhat Bengaluru Mahanagara Palike, was present to receive the report. The meeting ended with various interventions from those impacted by waste dumping in and around Bangalore.

Social media handle for news on the event 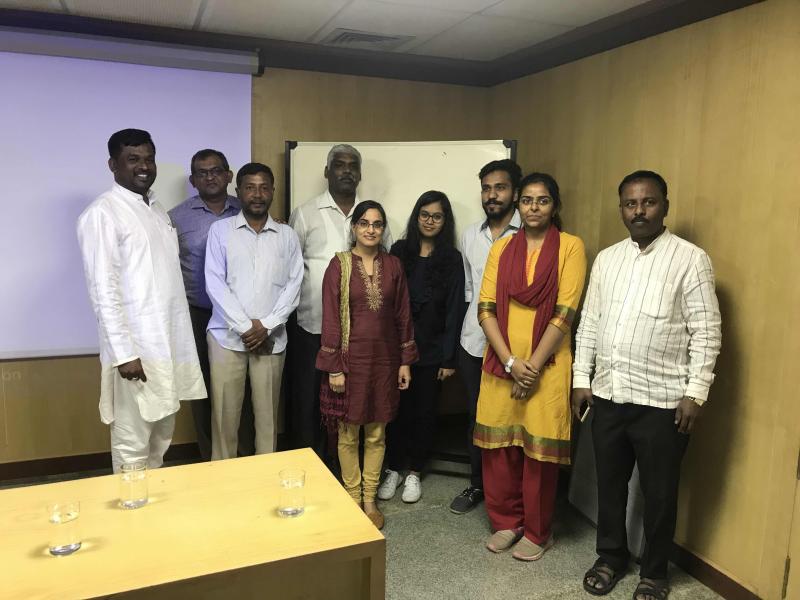 The team which made this report possible

1See, Environment Support Group and ors. Vs. Bruhat Bengaluru Mahanagara Palike and ors., W.P. No. 46523/2012 c/w W.P. No. 24739/2012. The orders, petitions and various documents submitted as part of these PIL initiatives are accessible at: http://esgindia.org/education/community-outreach/resources/esgs-initiatives-socially-just-and-ecolo.html