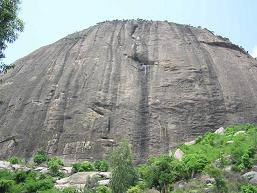 As you may already be aware, the Bangalore based foundation ‘Sanghamitra Buddha Foundation’ is planning on carving up the West face of Handigondi rock, 40 kms. South West of Bangalore, into a massive Buddha statue. Ostensibly the reason is to compensate for the destruction of Bamiyan Buddha statues in Afghanistan by the Taliban.

What is not revealed officially is that this is not the only statue to be carved out. Surrounding rocks will meet a similar fate as the project proposes carving out busts of Mahatma Gandhi, Ambedkar and other national figures and locating them in a setting that reflects a Buddhist retreat. But because this novelty may soon fade off public memory, and perhaps may not generate enough revenue, it is rumoured that the Foundation proposes to develop over 2000 acres of land around these rocks into a Film City set on the Sholay film landscape.

Surely, it is the 21st century, when ancient saints, modern day freedom fighters and matinee idols could bask together in historical glory, compromising, in the process, a geological marvel of great antiquity and aiding the elimination of threatened bird species. That the impact of Talibanisation of religion would result in caricaturizing of holy figures and statesmen, wasn’t quite the imagination one expected to come so soon. But business is business.

The Handigondi rock at 1050 Ft., is the highest rock in the range, easily visible from Bangalore, and an integral part of its landscape and lore. Any rock climber who has been initiated in this region, regards the scaling of the west face as an impressive achievement. And for no ordinary reason: the west face is almost completely vertical, thus trying muscle and mind against 2.5 billion years of weathering. For naturalists, this is a region that immediately needs to be protected from any disturbance as two highly threatened birds – the white backed vulture and the yellow throated bulbuls – are found here. Destroy the rock, and you will destroy the nesting grounds of the vulture.

About the Sanghamitra Foundation

The Sanghamitra Buddha Foundation have been rather brisk in raising funds for the project, what with Shah Rukh Khan, Rani Mukherjee, et. al. performing in Bangalore end April in a concert tastelessly titled TEMPTATION. It was a grand success as most who attended did not know where their entertainment money was going. As for the artistes, clearly they had exposed their ignorance, or disrespect, whichever be the case, for laws and loss of nature. Crores of rupees were raised, and will continue to be raised, if the process is allowed to continue. See their website for more details on their proposed project.

The range of Ramanagaram Hills, once referred to as Closepet Granites, are a younger set of coarse-grained potassic granites which form a chain of rounded bosses and domes running north-south, over a distance of 75 Km from south of Magadi till a little north of Kollegal and span over a width of nearly 25 Km from around Ramanagaram to the west of Kanakapura, represent a rock formations of great antiquity. These rocks formed during the Lower Proterozoic era, between 2600-2000 million years of geological history. These range of hills, unique to inland Karnataka, form one of the most picturesque features of the Indian landscape. They excel in grandeur and assume fantastic forms, form a part of the natural heritage of the state. Besides being a home to a large variety of flora and fauna, these hills together with their forest-covered slopes are of great ornithological importance.

But none of these factors had any bearing on the Government of Karnataka when they forwarded the proposal for clearance to the Union Ministry of Environment and Forests. The proposal claimed that only one rock would be carved out into the Sanghamitra Buddha, that being Handigondi. As this falls within the Handigondi State Forest area, the proposal sought permission to divert about 10 acres of forest land to non-forest purpose. There was a slight problem though as the Supreme Court had recently directed against defacement of rocks, given the many Coco Cola and Pepsi ads that were painted on rocks abutting highways in the Himalayan region. This was adequately taken care of by the District Forest Officer (Bangalore Rural) in his inspection report, who glibly stated that considering “it is carving a statue of international fame and away from highways and no paint is used for painting the rock… the guidelines regarding interference with the rock shall not apply to this case”. Clearly the officer did not consider dynamiting rocks such a big deal.

None of the senior officers reviewing the proposal checked this travesty. For instance the Karnataka Principal Chief Conservator of Forests forwarded the proposal as “there is no damage to the forest since tree cutting is not involved”. Further forwarding the proposal to the Ministry of Environment of Forests for final clearance, the Karnataka Principal Secretary of the Department of Forests, Ecology and Environment allowed the diversion of the forest land for carving the statue so long as “the legal status of the land shall continue to be forest land” and 10 acres of such land would be leased for a period of 15 years based on compensatory afforestation charges. Not one officer independently verified the project, beyond documentation submitted to them by the Foundation, and thus missed the big picture: that the project was over 2000 acres, not 10 acres for which permission was sought! A glimpse at the Sanghamitra Buddha Foundation website (www.sanghamitrabuddha.com) would have revealed “(T)he International Peace Center once complete will be the finest, comprised of the world’s tallest statue of Buddha with an imposing height of 712 Ft, amidst 2000 acres of lush green scenic beauty and creative marvels.”

Despite many representations, the Government of India has remained silent, a silence that could well mean severely compromising critical conservation requirements under the Wildlife Protection Act, other statutes and many international threatened species and heritage conservation treaties. Needless to state there are also many other reasons why this geological marvel should be left to its elements for posterity: sloth bear, leopard, small cats, wild boar, snakes, and a wide variety of flora and fauna abound the Handigondi State Forest. 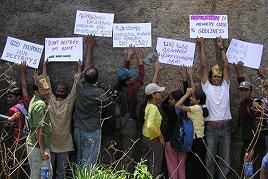 Handigondi has to be saved for posterity. The way to do it is to protest actively and visibly. Hundreds of climbers, naturalists, children, women, grandparents, students gathered at the Ghousia Institute of Technology on 29th May 2005, Sunday, on the Bangalore-Mysore Road and then rallied to the Handigondi rock in celebration of its natural splendour and to vow to protect it for posterity.

You can also contribute your bit towards saving the Handigondi rocks by writing about your concerns to:

Dalit Resistance To The Expansion Of Mangalore Airport