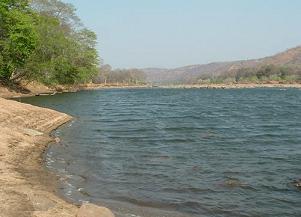 Flowing through the Deccan Plateau, the river Cauvery is a link between the cultural past of Southern India and its present. However, the river is endangered by various industrial effluents, sewage pollutants and sand mining on a rampant scale, mainly for the benefit of major urban centers such as Bangalore, as well as by proposed developmental projects like the linking of rivers and dams on the river.

‘Celebrating Cauvery’ on the occasion of the 7th International Day of Action Against Dams: For River, Water, and Life at Vikasana (a school supporting ecological and community development, located on Kanakpura Road) and Sangam (the confluence point of the Cauvery and the Arkavathi) on March 13, and 14, 2004 respectively, was aimed at raising voices in unison against destructive water development projects and pollution of rivers, reclaiming the health of rivers and watersheds and demanding an equitable and sustainable management of waterways. 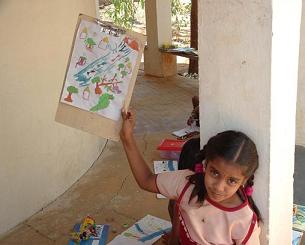 A workshop on the 13th of March 2004 was held at Vikasana, a school supporting ecological and community development. About fifty children attended the workshop to creatively celebrate Cauvery, and the feel of the morning was of ‘Rivers of Pictures and Flow of Words’. The children here were grouped by age. Children below seven years expressed their enthusiasm for rivers through colours on chart papers and even on the walls of the school, with full encouragement from Vikasana. The children between seven and eleven listened to the history and glory of rivers. Those above eleven watched a short film on Bangalore’s tanks, their slow but sure disappearance, and the precarious water situation in Bangalore.

Sangam is the confluence of rivers Cauvery and Arkavathy about 90 Kms from Bangalore on Kanakapura road. Mekedatu, a fantastic gorge formed by the Cauvery, is a major picnic spot, bringing thousands of people every weekend. Sadly, there is little responsibility demonstrated in enjoying nature’s grandeur. The place is littered with alcohol, plastic bottles and other rubbish. To commemorate this International Day on Rivers on March 14, our team supported by Canara Bank went to Sangam with the aim of spreading awareness amongst people to understand the need of responsibly enjoying nature and its beauty. Placards and posters were put up in the parking area and visitors were engaged in informal discussions on importance of rivers in their day to day lives. A few of them got involved with the team in collecting the garbage strewn by mindless picnic partakers. It took less than two hours to fill ten garbage sacks within the radius of a quarter kilometer which were then promptly deposited at the Department for Wildlife and Conservatory Office, Kanakpura. A strong representation was made to Mr. Vijay Lal Meena (IFS), the Deputy Conservator of Forests to do its duty as per the Forest Protection Act and make Sangam a Litter Free Zone. In the absence of Government department taking any measures, we promise to return with more volunteers to emphasis the need of such reforms.

You can write to the Forest Department to express your concern about the mismanagement of tourism at Sangama and express solidarity in making Cauvery a “No Litter” and “No Development” zone.

Volunteers are always welcome. If you want to volunteer in helping clean up the Cauvery, contact us.

In commemoration of the International Day of Action for Rivers, Water and Life, Environment Support Group undertook a unique campaign at Sangama (Mekedatu), Kanakapura Wildlife Range.

The Campaigners scoured this place for litter (plastic, pet bottles, glass, thermocol plates etc) and 10 gunny bags were full in just about an hour in an area of about quarter square kilometer. This was later deposited at the Office of the DCF, Karnataka Forest Department (Wildlife wing), Kanakapura with a representation urging Mr. Vijay Lal Meena, DCF, Kanakapura to take action to pass such orders essential per Forest and Environment Protection Act to make this region a ‘litter free zone’. (Copy of the letter is enclosed)

Cauvery and its surroundings is a lifeline to thousands of people downstream in the states of Karnataka and Tamilnadu and is a natural corridor to elephants and other animals. The severe threats from pollution due to lack of measures to check irresponsible tourism can choke this stretch of fresh water rendering it unfit for any use while also jeopardizing wildlife.

I am deeply concerned about the pollution in this region request you to take immediate action to pass such orders as essential per Forest and Environment Protection Act to ensure the region is appreciated meaningfully and with responsibility and in making this region a ‘Litter Free Zone’.

I hope to hear from you as soon as possible,

Address and Telephone No

SAY NO TO Bt Brinjal : SAY NO To Release Of Genetically Modified Crops In India