Several States have opposed the proposed Reforms, echoing concerns raised in the Appeal

The Indian Ministry of Environment, Forests and Climate Change organised a Conclave of Environment Ministers, Environment Secretaries, Chairpersons of Pollution Control Boards/Committees of all States and Union Territories, 6-8 April 2015 at Delhi. This Conclave was addressed by Prime Minister Narendra Modi and the key purpose was  to urge State Governments to support environmental “reforms” proposed by the Union Environment Ministry based on the highly controversial recommendations of “Report of High Level Committee to review Acts administered by Ministry of Environment, Forests & Climate Change” (also known as the T S R Subramanian Committee report).

We consider the proposed “reforms” are highly regressive and would result in irreversible damage to environment and human rights, and compromise ecological security of present and future generations. Very strong reasons why the Government must be discouraged from moving forward with these reform proposals are provided in a comprehensive critique of the Subramanian Committee report by ESG, entitled “A Non-trivial Threat to India’s Ecological and Economic Security” accessible at: http://tinyurl.com/pkbfpmw, and an article entitled “A hasty, half-baked report on environment” by former Union Water Resources Secretary Ramaswamy Iyer, accessible at: http://tinyurl.com/mqpx4av.

Enclosed is a Representation to Chief Ministers and Environment Ministers of all States, Secretaries and Chairpersons of Pollution Control Boards, urging them to impress upon the Prime Minister that environmental reforms in India must only be undertaken after due and legitimate nation-wide consultations and based on a deeply democratic processes, and not, as is the case now, an outcome of the highly in-transparent and undemocratic recommendations of the Subramanian Committee subordinating environmental considerations to economic growth.

State Governments and the Indian Government must be pressurised to back down from moving forward with these proposed ecologically disastrous “reforms”.  Already, several States have opposed the proposed reforms, and some links to news reports are provided below.

Letter to State Governments with Endorsements

We write seeking your immediate attention to certain proposals of the Union Ministry of Environment, Forests & Climate Change to reform environmental decision making in India. We consider these “reforms” to be highly regressive and would cause irreversible damage to environment and human rights.

As you are aware the Environment Ministry accepted the recommendations of the highly controversial “Report of High Level Committee to review Acts administered by Ministry of Environment, Forests & Climate Change” (also known as the T S R Subramanian Committee report). The Committee’s recommendations are oriented towards promoting unprecedented access to land, water and other natural resources to large corporate bodies and to pave the way for mega infrastructure, industrial and urban projects. Keen on ensuring that all State Governments support the Ministry’s “reforms” agenda, the Union Environment Minister Mr. Prakash Javadekar has called for a conclave of State Environment Ministers, Environment Secretaries and Chairpersons of Pollution Control Boards in Delhi, 6-8 April 2015, which will be addressed by Prime Minister Mr. Narendra Modi.

The Subramanian Committee was one of the first major policy initiatives of the National Democratic Alliance government headed by Prime Minister Modi. The purpose of the Committee was to draft “specific amendments needed in each of these Acts so as to bring them in line with current requirements to meet objectives”. Neither the Government nor the Committee cared to explain or clarify what this phrase meant. While preparing its report, the Committee held secretive consultations with corporate bodies and lobby groups, some state governments (not all), and held public consultations in a few cities which can best be described as tokenistic. The Committee submitted its report to the Prime Minister on 27th November 2014, barely 3 months after it had been constituted.

The Committee proposes sweeping changes to environmental, forest and biodiversity protection laws of India, proposes new laws to manage old laws, and promotes the establishment of a slew of new bureaucracies and the dismantling of decades-old regulatory institutions such as the Pollution Control Boards. The Committee shockingly proposes that industries must be allowed to self-regulate on a self-certification model based on “utmost good faith”, completely ignoring the disastrous experience India has had, most painfully being experienced by the people of Bhopal. The Subramanian Committee recommendations are not supported by any empirical evidence and appear to have been largely an outcome of opinions held by the Committee members and those they met with. And in stark contrast with well established norms for functioning of such High Level Committees, the Subramanian Committee has, admittedly, not kept any documentation of its process, who it met with, or even minuted its proceedings and the costs incurred.

Implications of the Subramanian Committee Report:

If the Subramanian Committee recommendations are accepted by the Centre and the States, prevailing environmental decision making norms and regulations will be grossly diluted, made extremely undemocratic, in-transparent and highly centralised. The very pillars on which India’s environmental jurisprudence stands today will be shaken as is evident from Section 3 of the new Environmental Laws Management Act proposed which seeks to make redundant various progressive judgments of the Supreme Court, High Court and National Green Tribunal advancing environmental and social justice.

The Committee also proposes that critical safeguards now available to natural resource dependent and forest dwelling communities and other vulnerable project impacted communities, such as the statutory requirement to involve them and seek their consent in environmental decision making and diversion of forest land, would be sidestepped so that investors could secure “speedy” environmental and forest clearances. In effect, the Committee’s focus has been to make environmental and social justice considerations subsidiary to business and investment priorities.

Such “reforms” would result in colossal and irreplaceable loss of biodiversity and associated traditional knowledge, destruction of sensitive ecosystems (with an emphasis on protecting only forests with over 70% canopy cover), increase the rate of species extinction, and threaten, disrupt, dislocate and displace pastoral, farming, coastal and other natural resource dependent communities. Floodgates for reckless exploitation of natural resources would be opened as clearances to projects would be accorded largely based on investment criteria. Extensive violation of human rights are thus likely to become the norm.

Centre-State relationships will also be adversely affected as the Union Environment Minister has accepted the Subramanian Committee proposals to establish National and State Environmental Management Agencies the configuration and management of which will be decided by the Centre. The critical role of Local Governments in environmental management and conservation has been comprehensively ignored, disregarding Constitutional mandates (in particular Articles 243 ZD, ZE and the 11th and 12th Schedules of the Constitution) which require the tier of governance closest to the people must be integrally involved in decisions about environment and natural resources.

While reforms are indeed required for environmental decision making in India, the objective has to be to safeguard public interest and the quality of our environment, and not, as is now proposed, to promote economic growth causing irreversible damage to ecological security of present and future generations. In the forthcoming Conclave, we urge you to impress upon the Government of India that environmental reforms must be an outcome of deeply democratic nation-wide debates and discussions, in which all agencies of Local, State and Central governments can meaningfully participate, and where the voices of peoples from all over the country, especially those who live in environmentally sensitive and stressful areas, and from all sectors, are heard, documented and rationally considered.

With that in mind, we urge you to reject the “reforms” proposed by the Union Government on the basis of the recommendations of the Subramanian Committee.

All India Forum of Forest Movements

Right to the City Campaign-India 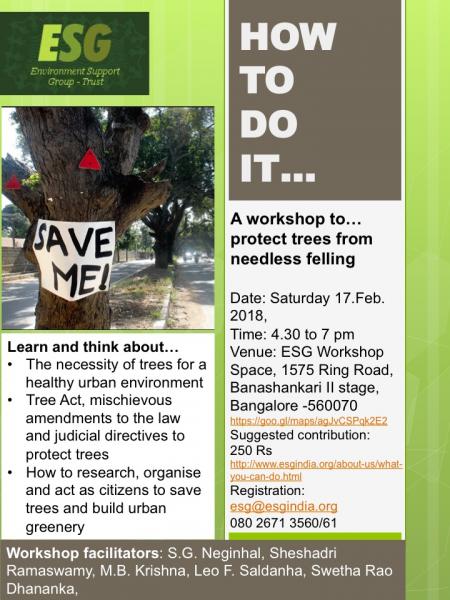 How To Protect Trees From Needless Felling In Bangalore 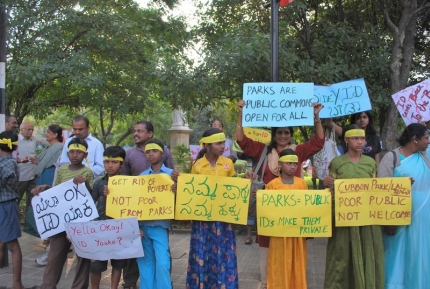