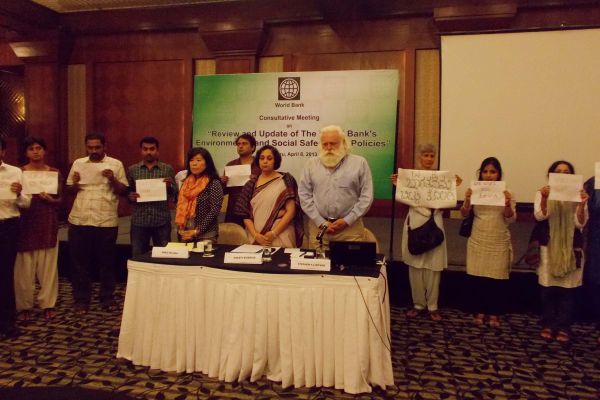 About 25 activist representatives, researchers, environmental specialists, policy analysts, lawyers and health professionals from a wide range of social and environmental action groups, peoples networks and movements of Karnataka, forced the closure of The World Bank’s ‘consultation’ on the review of its environmental and social safeguards in Bangalore today (08/04/2013). The ‘consultation’ was slammed as a ‘complete sham’ which ‘must be denounced by anyone genuinely concerned about the nature of democracy and broad based public interest, and committed to the principle of Free, Prior and Informed Consent (FPIC), climate justice, sustainable development through democratic decision making and the Principle of Intergenerational Equity’. Moreover it was made into an occasion to denounce the various projects that have destroyed the environment and various communities, and to demand the World Bank to quit India.

Stephen F. Lintner, Senior Advisor, Operational Policy and Client Services of The World Bank had flown in from Washington DC (USA) to hold the ‘consultation’ at Hotel Atria in Bangalore, along with Preeti Kudesia, Senior Operations Officer of the Bank. The meeting was supposed to have been facilitated by Anubrotto Kumar (Dunu) Roy, Honorary Director of Hazards Centre, New Delhi.

Of those invited by the Bank, about 5 represented various civil society and research organisations, and a dozen or so officials represented various agencies of the Karnataka and Andhra Pradesh governments. The consultation was held barely a stone’s throw from the Karnataka Legislative Assembly, and yet, shockingly, not one Parliamentarian, Legislator, Municipal Councillor or Panchayat member from anywhere had been invited. This amply demonstrated what a mockery of democracy the exercise was.

The invited gathering of about 20 odd ‘representatives’ of ‘civil society organisations’ and Governments of various Central and Southern States of India were probably invited by the Bank to accord a certain legitimacy to the review exercise. Were it not for the intervention of progressive social and environmental action activists, this charade of ‘consulting’ the ‘public’ would probably have been passed of as a successful process, and the exercise possibly used to legitimise the weak safeguards of the Bank.

Clifton D’ Rozario of the Alternative Law Forum read out a detailed statement (attached) which strongly critiqued the World Bank’s ‘consultation’ process and also its investment policies. He attacked the Bank’s double-speak on claiming belief in democratic decision making, when, in fact, all it does is talk to an elite section of society and claim such opinion gathering held in classy hotels as peoples’ sanction to the Bank’s investment policies. He also reminded the World Bank of its responsibility in regard to the devastation heaped on the lakhs of adivasis and farmers in the Narmada Valley due to Sardar Sarovar dam, which it fails to own up to even today. He also decried the so-called ‘knowledge production’ by the World Bank as methods to monetise and commodify all resources and even relationships.

Leo Saldanha of Environment Support Group criticised the flawed process of the Bank’s consultation mechanisms and said it amounted to ritualising the FPIC Principle. He demanded that the Bank cancel the charade being passed of as a ‘consultation’ as it was against the jurisprudence that had evolved in India which required deep application of FPIC Principle in decision-making. The current process seriously compromised people’s right to know and participate in decisions that affect them and exposed the Bank’s vacuous claim of being a ‘change maker’ in developing progressive environmental and social safeguards.

Kshitij Urs of Action Aid slammed the Bank for being satisfied by this charade of a ‘consultation’ held amongst selected ‘stakeholders’ that especially excluded elected representatives. He said the Bank had over the decades succeeded in creating a perception of being progressive, when in fact it had structurally damaged national economies and devastated communities everywhere it lent. The Bank’s interests were too strongly aligned with imperialist designs of the US and other Northern economies and this was seriously compromising India’s sovereign power to decide its developmental process. Quoting Obama, he said, ‘Enough is Enough’, and asked the World Bank to please leave.

Speaking on behalf of the Janaarogya Andolana Karnataka (JAAK) Akhila Vasan said the World Bank’s policies have fragmented and progressively weakened the public health system through introduction of various forms of contractual arrangements. Under the influence of the Bank’s ‘universality’ policies, Karnataka is aggressively pushing numerous insurance schemes and ‘managed care’ models that are leaving people to the mercy of the exploitative, predatory private health sector, and resulting in further impoverishment and destitution. ‘User fee’, introduced by the Bank’s investment policies, is blatantly anti-poor, and an unscientific policy that has its roots in the larger structural adjustment process initiated by the World Bank. She accused the Bank of arm-twisting governments into pursuing several privatization models, including Public Private Partnerships, which enabled Corporate/for profit agencies to enter the ‘health care’ market in various ways with disastrous consequences on livelihoods and survival of several communities.

Madhu Bhushan of Vimochana in an impassioned intervention said the World Bank’s policies and lending patterns have deeply affected the lives of women in India and particularly the poor women. As a Bank it can only perceive every relationship as an economic transaction – women are commodified and reduced to being consumers and led towards greater indebtedness. New vulnerabilities have resulted as a consequence, she said, which not only increased violence in private and public spaces but also greater social and economic violence. The classic example of this is the microfinance project of the Bank – supposedly initiated as a means to increase self-reliance and reduce the dependence on exploitative local money lenders amongst rural and poor women. The number of documented cases of suicides of women who are unable to repay has dramatically increased wherever the Bank promoted ‘self-help group’ loans, and caused divisiveness within rural communities, Bhushan said. “If this is not an agenda of Genocide, what is?” she enquired. Reacting strongly to Lintner’s intervention that these facts would be taken on record, she asked him to stop patronising by offering to take concerns on record, thus reducing people to mere footnotes in a Bank document.

Vinay Sreenivasa of Alternative Law Forum perturbed by the Bank holding the consultation in Bangalore when no effort whatsoever was made to communicate in local languages demanded the ‘consultation’ must immediately be abandoned and the process revisited only after all the policies were translated to local languages and effectively disseminated publicly. He pointed out not one of the Bank’s officials knew any of the languages spoken in the region, and yet the institution had the gaul to hold a ‘consultation’ in South India claiming it was an opportunity for local people to engage with proposed revisions of the critical environmental and social safeguards.

Rajendra Prabhakar of the Campaign Against Water Privatisation attacked the Bank as an agent of neo-liberal colonisation. The so-called development programmes of the Bank were undermining democracy as it created debt traps, that attacked the very idea of sovereignty, citizenship and genuine progress of people, he said. Bhoga Nanjunda of CIEDS Collective joined issue and said the Bank was not in India to promote genuine people’s development, but to pursue its business of lending. He asserted that India is a not a market for promoting the World Bank’s business.

Bhargavi Rao of Environment Support Group presented a nuanced analysis of the careless disregard the World Bank cultivated for its own environmental and social standards. She attacked the International Finance Corporation, the private sector lending arm of the World Bank, of massively financing the expansion of the West Coast Paper Mills in Dandeli (North Karnataka) even after it had been officially informed that the company had for decades violated all environmental norms and discharged its waste into the Kali river devastating its ecology and the lives of downstream communities. Bolstered by the Bank’s lending and promotion of ‘industrial farming’ practices, the company was now colonising local forests with pulp-wood plantations on the dubious claim they were degraded.

Similarly, Nitin Rai of the Ashoka Trust for Research in Ecology and Environment (ATREE) presented his experience of the World Bank’s Global Environmental Facility funded Eco-Development Project implemented by the Indian Ministry of Environment and Forests, which he said was done without any adherence to the Bank’s social and environmental safeguards. He expressed his deep shock and dismay that the World Bank had chosen to hold a ‘consultation’ in such an intransparent manner.

Arati Choksi of People’s Union of Civil Liberties attacked the World Bank’s ‘pro-poor’ policies as reeking of a plan to make profit out of the poverty alleviation programmes. What is particularly worrisome, she said, is the insidious and coercive manner of World Bank in implementing the ten point agenda of the Washington Consensus, of not just fiscal profit, but placing its own partner stake holders firmly in control of all public sector enterprise and resources – water, energy, transport, health, and education – for continual and perpetual financial extraction.

Despite repeatedly being urged to speak, not one of the officials representing various Government agencies chose to spoke. Mr. S. M. Jamdar, a senior bureaucrat of the Karnataka Government who recently retired, also did not speak. He, however, spoke to media persons where he is reported to have said that he shared all the concerns being aired, and said it is critical that these messages reached senior politicians and bureaucrats of the Government who were complicit in perpetuating such systemic problems.

In the face of such informed criticism of its actions, policies and ‘consultation’ procedures, Stephen Lintner decided finally that the ‘consultation’ had ended without any adherence to the Agenda the World Bank had proposed.