Tens of Small and Medium Industrial, Infrastructure, Mining Projects or Biotech projects can now be approved without any review of their significant environmental and social impacts

Tens of Small and Medium Industrial, Infrastructure, Mining Projects or Biotech projects can now be approved without any review of their significant environmental and social impacts 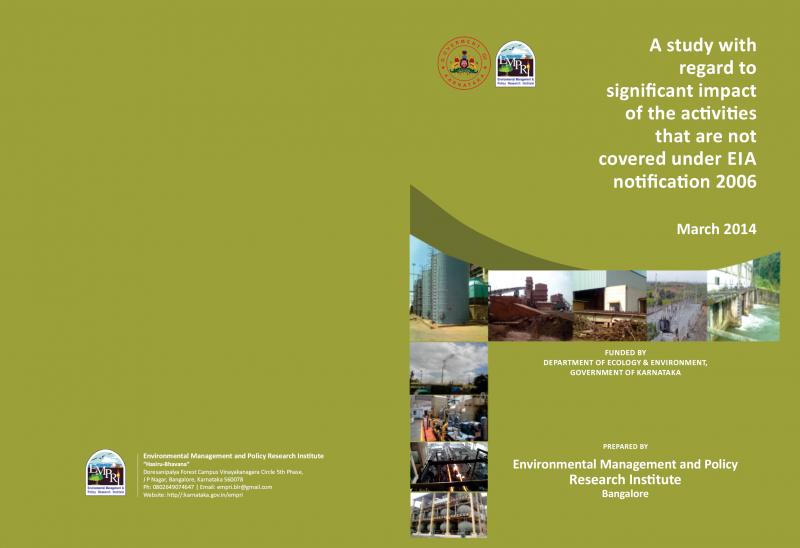 In 1985, the Government of Karnataka took an unprecedented step by instituting the State Environmental Clearance Committee (SECC) as a measure of strengthening its environmental decision making processes. The horrors of toxic gas leak from the Union Carbide plant in Bhopal that killed and maimed thousands had exposed fundamental weaknesses in prevailing environmental regulatory controls essentially administered under pollution control laws by the State Pollution Control Boards. Karnataka was aware that environmental and social impacts of industrial, infrastructure development and extractive sectors had to be anticipated and safeguards built in priorly, to prevent recurrence of such a calamity. Consequently, the SECC was set up in Karnataka to ensure industrial development and economic progress did not result in the irreversibly damaging human health and environment, and destroying irreplaceable biodiversity.

At the national level, Environment Protection Act enacted in 1986 sought to institute comprehensive environmental regulatory and management controls. But these were slow to come by. Karnataka therefore utilised the SECC mechanism that it had developed to anticipate and mitigate environmental impacts of various industrial and infrastructure development projects. When finally the Environment Impact Assessment Notification was brought into effect in 1994, it covered only a very small selection of projects that the Ministry of Environment and Forests considered were of “high impact”. Recognising that the EIA Notification was not a comprehensive initiative to tackle challenges in environmental regulation, the Karnataka Government decided to continue with the SECC mechanism. The facility monitored environmental and social impacts of all projects that were left out of the purview of the EIA Notification; tens of projects from several sectors with significant environmental impact had been left out.

Since there had not been a review of the efficacy of the SECC mechanism since it was established, in 2013 Mr. Sridharan, IAS, then Principal Secretary of the Karnataka Department of Ecology, Environment and Forests directed the state’s Environmental Management Policy Research Institute (EMPRI) to undertake a comprehensive review. EMPRI contracted our services to conduct the review based on a thoughtfully evolved Terms of Reference and Agreement that involved specific commitments that the final report would be made public.

On this basis the study was undertaken over a period of one year with excellent support and cooperation from the EMPRI leadership and staff. A framework was developed to rigorously and comprehensive assess and analyse the working of the SECC. This involved reviewing 447 clearances that had been accorded during 2002-2012 to dams, industries, mining projects, infrastructure projects, biotech firms, radiation processing units, etc. and field verification of 10% of these projects across various sectors and district was undertaken to assess extent of compliance with clearance conditions. The quality of the clearance accorded were also thoroughly reviewed for sectoral specificity. In addition, feedback was actively solicited from each and every project cleared and also commerce and industry association, academicians, consultants, regulatory officials, etc. On the basis of this work, we prepared the report in collaboration with EMPRI and proposed various ways to reform the agency in securing the ecological security of the State. It was also proposed that if Karnataka were to undertake these reforms, it would once more establish itself as a leader in environmental regulation for States across the country to emulate.

The Final Draft Report reviewing SECC was submitted in January 2014 to Mr. Sivasailam, IAS, at that time the Principal Secretary of the Karnataka Environment Department. It was decided in this meeting that the report would be shared with an invited audience in a workshop and after incorporating their comments and suggestions, the report would be made public for comments. 10th February 2014 was fixed to conduct this preliminary workshop.

Within days of this meeting, i.e. on 7th February 2014, the Karnataka Environment Department decided to scrap the SECC. The brief order issued claiming that the SECC had become irrelevant. This order does does not acknowledge that a State funded study on the working of the SECC with the intent of reform the institution had been commissioned and that the report was pending public review.

In a meeting of the Board of EMPRI held on 2nd April 2014 and chaired by Mr. Madan Gopal, IAS, currently Principal Secretary of the Environment Department, it was decided on the advise of Mr. Ramachandra, Secretary of the Karnataka Environment Department that “only a limited number of copies of report may be printed and used for academic purposes” and that “there is no need of conducting workshops or publishing the report on the EMPRI website”. In the same meeting a decision was also taken to stop an ongoing study of EMPRI reviewing efficiency of environmental and forest clearance decision making of projects under the EIA Notification.

Our efforts to convince the Karnataka Government to revoke its decision to scrap SECC and make our report public, as required, have been unsuccessful. We consider the decision to discontinue SECC to be legally infirm and illogical. We consider the decision not to make our report public is a contravention of Government Orders and TOR commissioning the study. An excellent opportunity to review and reform SECC and make it accountable, transparent, its administration decentralised and democratic has thus been lost. With it has also been lost an incredible opportunity to safeguard environment and public health in Karnataka.

We are confident though that this regressive decision of the Karnataka Government can be reversed if the wide public and elected representatives so desire. We have therefore decided suo moto make public the complete report along with the order scrapping SECC, the EMPRI Board minutes and also our contract. These may be accessed online at: http://tinyurl.com/gnvj59g

We wish to state that the study was undertaken in our individual capacities. We are grateful to our colleagues in Environment Support Group for assisting us in the preparation of the report and its dissemination.

Please direct all queries relating to this report and the SECC review process to secc_review@esgindia.org. If you need any assistance in downloading the report, please contact shashi@esgindia.org.