In a significant decision, a Division Bench of the Hon’ble High Court of Karnataka constituted by Mr. Justice Mohan Shantanagoudar & Mr. Justice B. Sreenivase Gowda ordered notice today on Mr. S. V. Ranganath, IAS, Chief Secretary of the Government of Karnataka on why action should not be initiated per Contempt of Court Act, 1971 for not complying with the directions of the Hon’ble Court in WP. 817/2008 (Environment Support Group and anr. vs. State of Karnataka represented by Chief Secretary and ors.), more than a year after the order was passed. The notice of contempt was issued in a Civil Contempt Petition No. 1336/2013 filed by Environment Support Group and anr. vs. Mr. S. V. Ranganath, IAS, in his position as Chief Secretary of the State of Karnataka.

It may be recalled that a Division Bench of the Karnataka High Court constituted by Mr. Justice K. Sreedhar Rao and Mrs. Justice B. S. Indrakala in their final directions of 11th April 2012 in the ESG Lakes PIL (WP No. 817/2008) had directed various functionaries of the Karnataka Government and local governments to ensure that District Lake Protection Committees and State Level Apex (Appellate) Lake Protection Committee were set up immediately so that public at large would be able to seek appropriate remedies to stop the widespread encroachment, pollution and destruction of lakes in Karnataka. Such a direction was also issued to ensure the public did not have to approach Courts and that necessary relief could be secured locally and immediately. The Court had affirmed that the detailed guidelines for “Preservation of Lakes in the City of Bangalore” prepared by the Court appointed committee chaired by Mr. Justice N. K. Patil would be binding for survey, protection, rehabilitation and wise use of all lakes and raja kaluves (canals) across Karnataka. To ensure that their orders were obeyed, and with due urgency, a specific direction was issued to the Chief Secretary stating that he “…is directed to comply the above said directions by passing necessary order in accordance with law for ensuring proper preservation, maintenance and development of lakes.”

Despite repeated reminders, the Chief Secretary failed to comply with the High Court order to constitute the lake protection committees. Consequently, a legal notice was served in May 2013 by ESG urging Mr. Ranganath to comply with the High Court directions, failing which contempt proceedings would be initiated. When even the legal notice went unheeded, contempt proceedings were instituted resulting in the said direction of the Karnataka High Court.

All details relating to ESG’s legal, public education and campaign efforts to protect lakes in Karnataka may be accessed at: http://esgindia.org/resources/resources/all-resources-including-esg-pil-nkpatil-.html

CEJI DEMANDS FABRICATED CASES AGAINST ENVIRONMENTAL ACTIVISTS PIYUSH MANUSH, MANSOOR ALI KHAN, VALARMATHI & OTHERS MUST BE DROPPED AND THEY BE RELEASED UNCONDITIONALLY 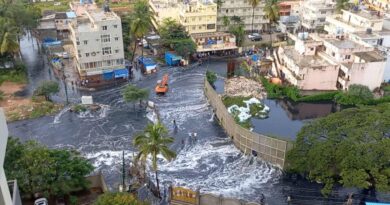