ON HAND MADE GOODS SECTOR 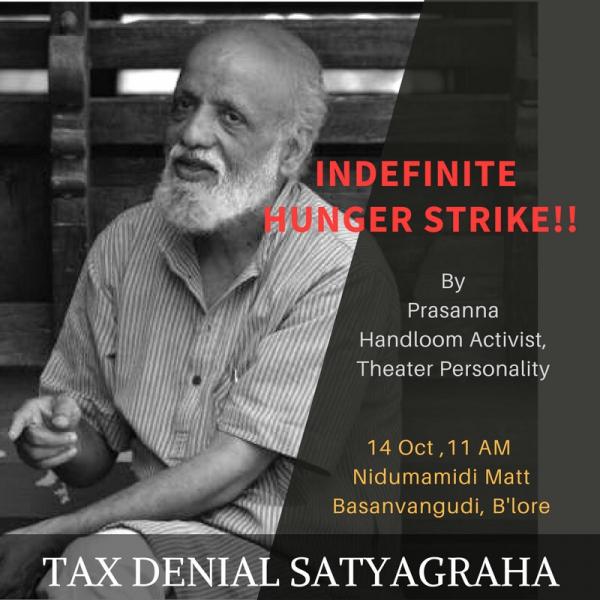 Theatre Personality Prasanna Heggodu is starting an indefinite fast demanding that the GST imposed on the handicraft/artisanal sector is withdrawn comprehensively. He will start his Sathyagraha along with veteran Gandhian H. S. Doreswamy on Saturday, 14th October 2017, 11 am at Nidumaamidi Math, H. B. Samaja Road, Basavanagudi, Bengaluru.

Millions of artisans who have survived even the worst attempts by the British Colonial Empire to tax them into oblivion, are now threatened by the real prospect that they may not survive as artisans. This is due to the high tax imposed on them under the GST regime. Artisans are being taxed in the 12-28% GST bracket. This when most are struggling to survive as profits are down 50% as machine made mass produced goods are dumped in local markets due to the globalised trade regime. Profits from such mass produced goods feeds the richness of the super rich, and does nothing to help the poor of India come out of poverty. Now with GST, the future of India’s artisans is at stake. 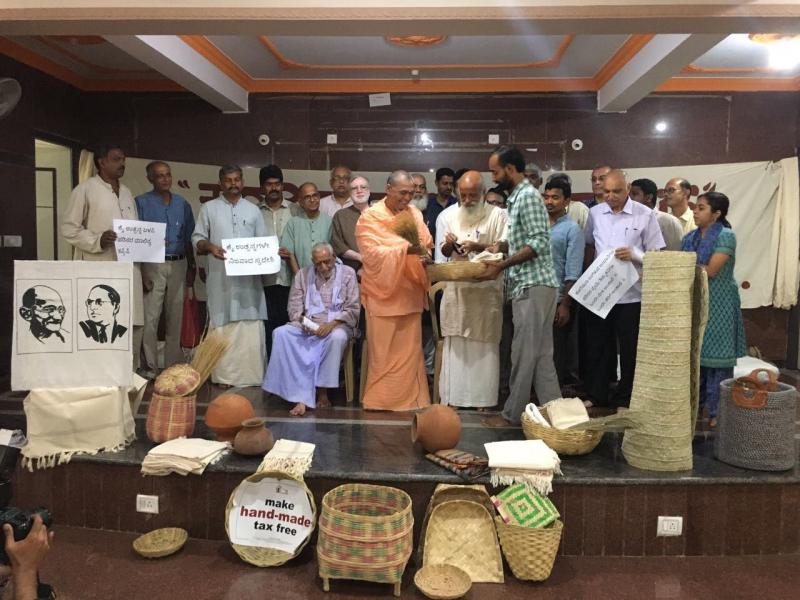 If we do not act now to demand that the Government of India withdraw this unjust and brutal tax, it is likely that millions of artisans will be forced to give up their invaluable creative entrepreneurship and become part of the large and increasing pool of the unemployed in the country. Not only will this result in mass povertisation, it may also lead to mass destitution of artisanal families.

Artisans represent the most fantastic diversity of human ingenuity, producing a whole range of products that make our lives richer. They make a variety of affordable and useful products that we need, with their hands, and which does not cost the Earth. With great diversity of skills and entrepreneurial zeal, sovereign artisans have built this country as much as have the extractive, industrial and manufacturing sectors or IT and Services Sectors. But, except artisans, every other sector get tax holidays, massive loans, bad loan write-offs and also major subsidies. All that the artisanal/handicraft sector is demanding is that GST not be imposed on them.

Despite many protests, dharnas, rallies, conferences, workshops, appeals, representations, etc., the Government of India has paid no attention to the appeals of the artisanal community nation wide. Instead, the highly monetised, commercially driven, intensely commodified, and capital driven mechanism of GST, that aggressively promotes tax maximisation without any social purpose, is what the Union Government is investing its effort on. The worst affected are the artisans.

Artisanal communities are dispersed, and they are struggling to survive everywhere. A day off from work to protest, is less food at home. So precarious is their existence today. There should have been massive protests against this travesty of our times, and in support of social and economic security of artisans. The collective conscience of India should have been troubled, and we should have stepped out in protest against this inhumane tax on artisans. But its appears we have been numbed into silence.

To awaken our collective conscience and demand the Government comprehensively scrap the GST on the handicrafts sector, Shri. Prasanna and Shri. Doreswamy will start this Sathyagraha on Saturday, 14th Oct 2017.

For details on how to join or support the Sathyagraha, please contact: