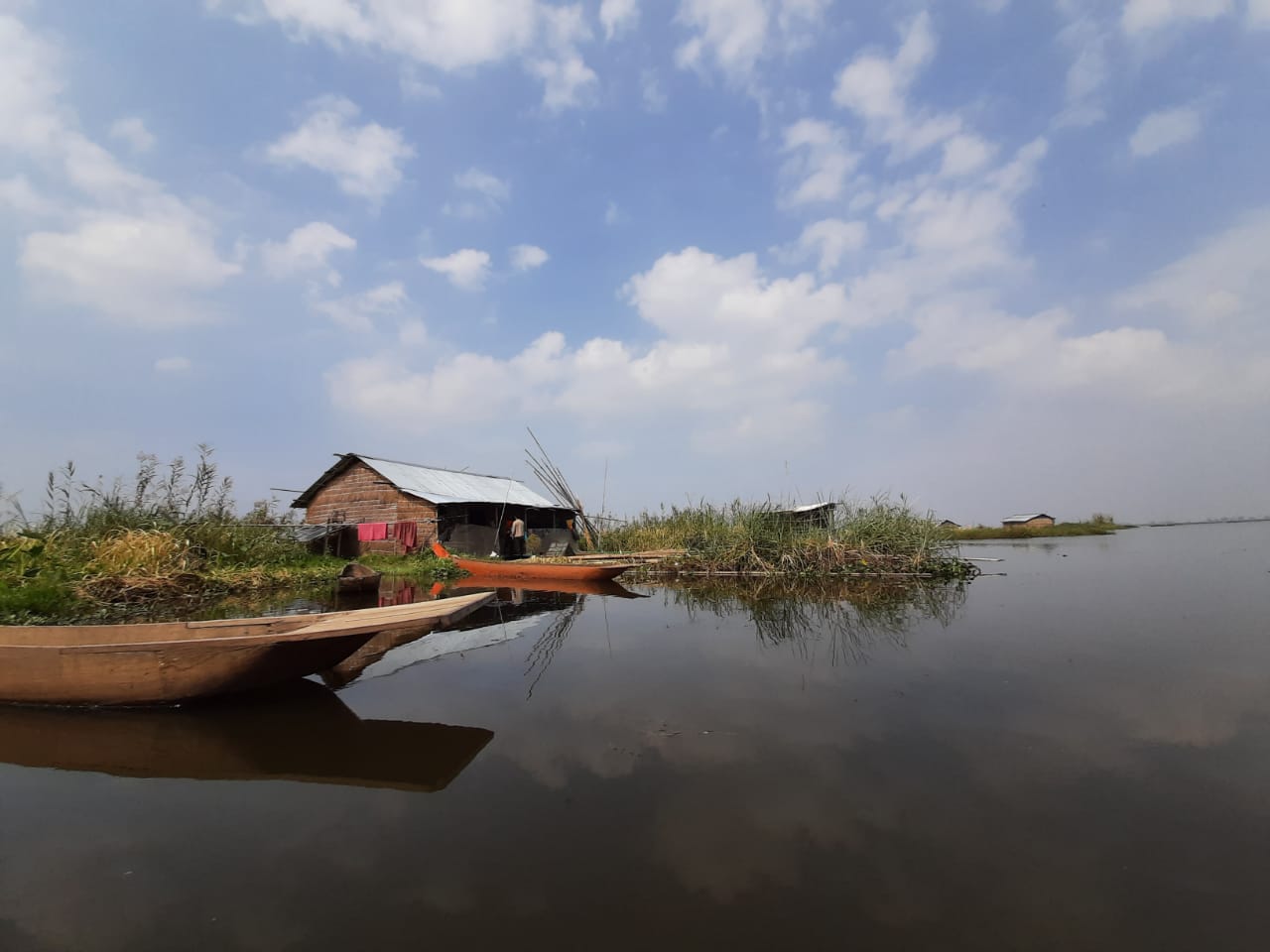 Fisher unions and farming communities of Manipur commemorated the 2021 World Wetlands Day (2nd February, 2021) at Tonoma Chingjin, Mamang Ching, Pumlen Pat – a wetland devastated by the Ithai Barrage of the Loktak Hydroelectric Project. The event was organised by Ngamee Lup, a federation of fisher unions and other associations of Loktak and surrounding wetland areas including Pumlen and Khoidum Lamjao. The event was organised in coordination with Indigenous Perspectives (Imphal) and Environment Support Group (Bangalore) and hosted by Pumlenpat Ngamee Sinmee Lup.

The focus of the event was to demand Wetlands International South Asia and Loktak Development Authority  must unconditionally withdraw Loktak: An Integrated Plan for Wise Use (2020-2025) and that the Government of Manipur must repeal the draconian Manipur Loktak Lake (Protection) Act, 2006. The federation also demanded cancellation of Loktak Inland Waterways Project and the Loktak Eco-tourism project as they would devastate the wetland complex. The occasion was also an event asserting the indigenous and natural right of present and future generations’ to access these wetland commons without repressive action of the Government of Manipur and Loktak Development Authority (LDA), as has been the case periodically.

The event witnessed active participation of people living in and around Loktak, Pumlen and Khoidum Lamjao and also representatives of fish workers living on Champu Khangpok, the floating village of Loktak. Members from Human Rights Alert (HRA) and Extrajudicial Execution Family Association Manipur (EEVFAM), Imphal-based organisations working for the protection of civil and political rights of the people of Manipur,   the Lawyers Collective from Imphal and Manipur Loumee Marup (affiliates of All India Kisan Sabha) participated to extend solidarity with the local peoples’ just struggles. Representatives from Girl Up Manipur and Fridays For Future (Manipur Chapter)were also present.

The event was opened with a keynote address from Mr. Salam Joy, Secretary of Pumlen Pat Ngamee Sinmee Lup. As a representative of a community practicing both farming and fishing in the area for their survival, he highlighted how their land was destroyed by the Ithai Barrage in the 1980s. For his community the result of commissioning the Ithai Barrage across the Manipur River has been equivalent to pushing them into conditions of forced poverty. For 40 long years the community has been eking out a living by nurturing small fishing zones, and that too without any support from the government. Now the land on which they farm and fish is also on the verge of being taken over for various infrastructure and mass tourism projects. He asserted that the  wetland is their ancestral territory, and the entire community is resolved to resist the takeover of these biodiversity rich commons by corporations backed by the government.

Mr. Oinam Rajen, who is an union worker and resident of Champu Khangpok Floating village, stated categorically the need of the hour is to fight back against all such projects that will destroy the wetland along with the natural ancestral rights to the wetland system.

Mr. Nimai Keisham, President of Khoidum Lamjao Ngamee Sinmee Lup, recalled how life was before the Ithai barrage. Nimai said it is high time the fishers and the farmers get together before the government takes over their land and livelihood.

Mr. Ratan Yumnam, the Secretary of Manipur Loumee Marup (Manipur Farmers Union), drew attention to the strong linkage between the ongoing farmers’ protest across the country and the struggle of the Loktak people. He said it is time the farmers and the fisherfolks of Loktak and the surrounding wetlands come together with those who are leading the movement against the repressive pro-capitalist system. He emphasised on the importance of  collectively fighting against undemocratic and oppressive projects that would certainly result in destruction of wetlands and displacement of fishing and farming communities in Manipur.

Mr. Babloo Loitongbam, Director of Human Rights Alert, said the government policy and programs are antithetical to conservation and livelihood of the people of the Loktak and the other wetlands. He told the members in the audience that right to life and livelihood are enshrined in the Constitution of India and the Government of Manipur cannot bypass any of the laws that seek to protect them. He also said that human rights groups in Manipur and also those across the world must help in the defense of the people of the wetlands and their livelihoods.

Advocate Ningthoukhongjam Subash, a member of Human Rights Alert, said the law of the lake is terribly wrong and works against the interest of the people of the lake and therefore it must be challenged.

Mr. Oinam Mohen, secretary of Loktak Fishermen’s Association, Ningthoukhong, reiterated the need for all fishing villages to come together to fight against Manipur Government’s proposals of so-called development and ‘wise use’ of Loktak wetland complex.

Mr. Ram Wangkheirakpam, Convener of Ngamee Lup, read out a  Global Petition that asserts rights of local indigenous communities to continue to live in the Loktak region without being disturbed by destructive projects and draconian laws and State action.  The petition calls on the international community to support the struggle of the fishing community of Loktak Wetlands region, and includes Wetlands International to withdraw its so-called ‘wise use’ plan.

The event closed with release of campaign posters by Ms. Lanchenbi, Panchayat member of Khoidum Lamjao, in both English and Manipur, a symbolic gesture to mark observance of the World Wetlands Day at Pumlen Pat and of resisting projects that attack human rights and destroy nature. 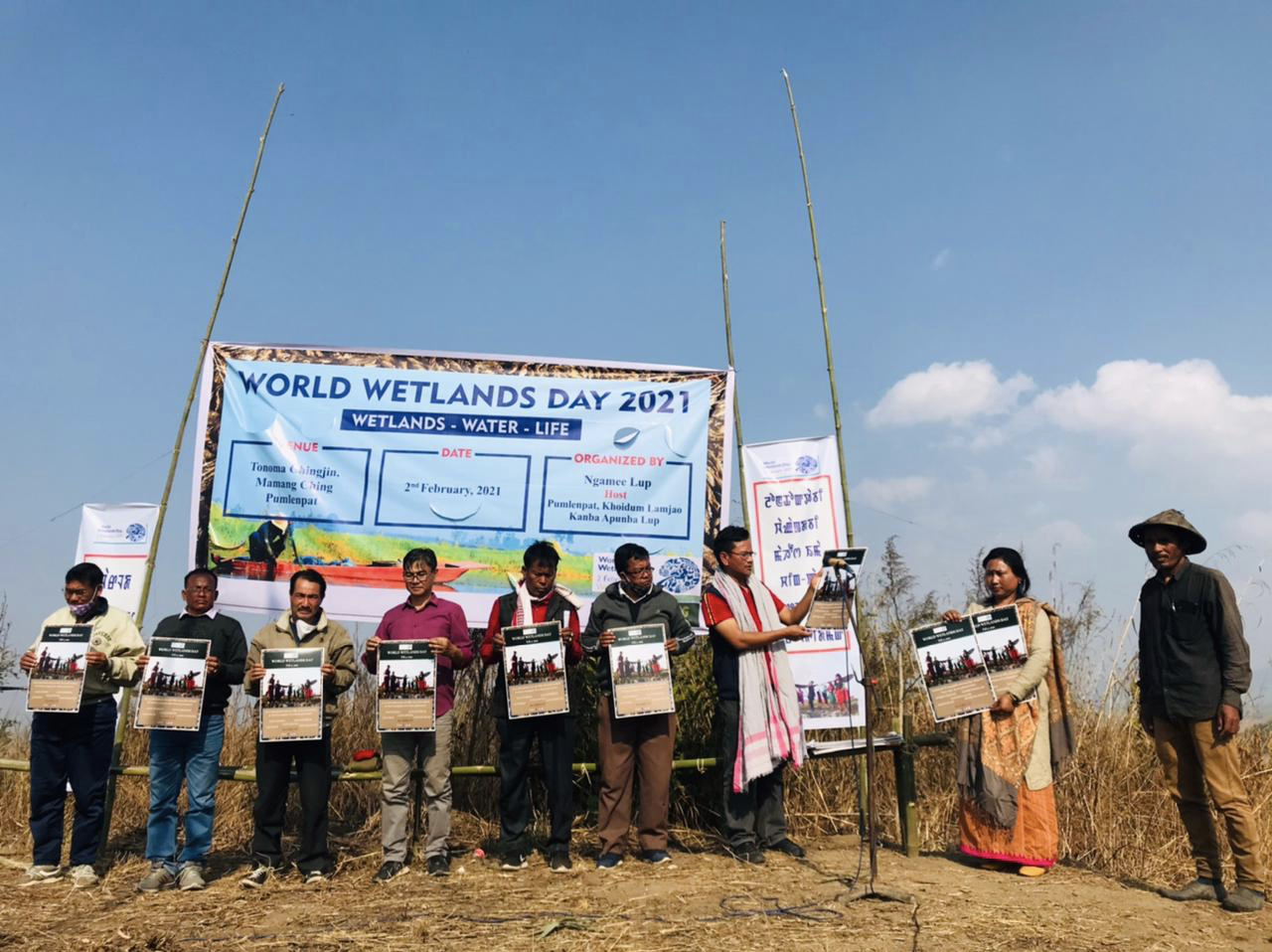 For more information, please connect with: