Organised by CERAS and Centre for Engineering in Society, Concordia University

CERAS and Centre for Engineering in Society, Concordia University

Undemocratic and exclusionary schema for urbanising India: the case of “Smart Cities”

One of the key policy proposals made by Indian Prime Minister Narendra Modi during his first year in office has been to propose, repeatedly, “smart cities” as a key method for leap-frogging India into the developed world. A sibling proposal is to turn India clean with “Swatchatha Bharat Abhiyan” (Clean India Campaign). Both proposals have popular subscription as it is difficult to argue against such schemes on most public platforms. A deeper interrogation of the mechanistics of these proposals, reveals they aren’t progressive urbanisms at all. Instead, these proposals are deeply undemocratic and designed to benefit only a privileged few. Further, they come across as non-inclusive ideas of “development”, promoted anachronistically deliberately in reclaiming India’s past glories. Even as debates over these schemes have not matured, the Government is going all out in implementing them, evident in the aggressive promotion of the highly retrogressive Land Acquisition Bill, 2015 which is needed to acquire hundreds of thousands of acres of land these schemes demand. It is critical to interrogate the likely consequences of these schemes, for whether they succeed or not, they will have an irreversible impact on India’s urban and infrastructure landscapes, and most certainly its politics.

Leo F. Saldanha is full-time Coordinator of ESG. He has gained wide-ranging experience in the areas of Environmental Law and Policy, Decentralisation, Urban Planning and a variety of Human Rights and Development related issues, working across many sectors for over a decade. He is a keen campaigner on critical environmental and social justice issues and has guided several campaigns demanding evolution of progressive laws and effective action. He has creatively supported various distressed communities to secure justice through public interest litigations and advocacy efforts, arguing as party in person several public interest litigations, many of which have resulted in remarkable judgments. In 2007, he co-authored the book “Green Tapism: A Review of the Environmental Impact Assessment Notification-2006” (2007) with team members at ESG. He has since co-authored several investigative reports including a comprehensive review report of Environmental Decision Making in Karnataka State to State Environmental Clearance

Committee. His papers and articles have appeared in many leading newspapers, journals and magazines. In addition, Leo facilitates a variety of learning programmes on environmental and social justice concerns for a wide range of audiences. He was the Country Coordinator and Faculty of the “Cities in the 21st Century” and “Health and Community” courses of the International Honours Programme, USA from 2002-2009. He is currently co-Director of the India Centre of the Minnesota Studies in International Development, a division of the Learning Abroad Centre of University of Minnesota, USA. He has a background in Environmental Science and has been invited as a speaker by organisations and universities across the world. 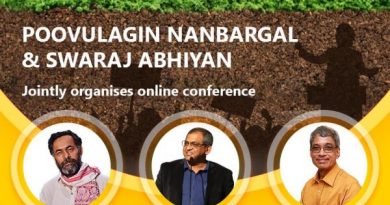 Public Talk On Uttarakhand Disaster: Can The Nation Learn Any Lessons?