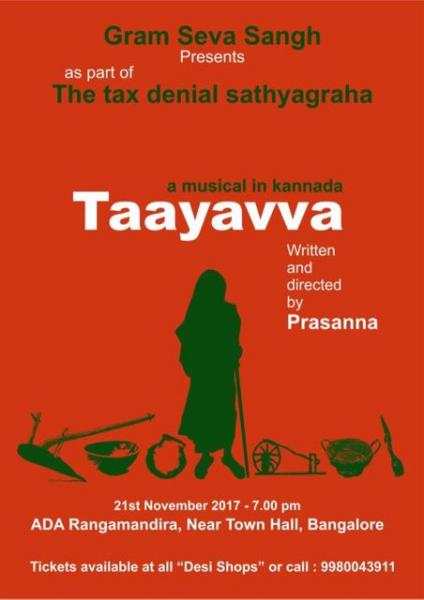 In the frenetic pace of industrialisation, fuelled by capitalism in particular, and also in the prevailing world of consumerism, there is little care and regard to understanding what comes from where and how it is made. We all are becoming a part of an increasingly impersonal world in which the life blood is money. All transactions are financialised and it is also presumed and proposed that there can be fairness in promoting Justice by economically arranging how money flows. And there is almost an arrogant disregard for those who aren’t part of this monetised world, which are the majority of humanity.

The harsh and heavy imposition of Goods and Services Tax (GST) on the handmade sector is an outcome of such impersonal and violent transactions that have become so commonplace and systemic to our lives, and livelihoods. And it is not only costing us our humanity, but also the planet itself.  Taayavva is an argument against that world, written and directed by noted thespian Prasanna and performed by Pallavi Arun.

Come watch this play and participate in the first civil disobedience movement of the 21st Century. This one is to demand 0% GST for handmade.  When you buy a ticket, you send a message that is historical.

To purchase tickets, or make bulk bookings, call 9980043911.  You may also pick tickets from ESG or any of the Desi Stores in Bangalore (https://desiangadi.wordpress.com).