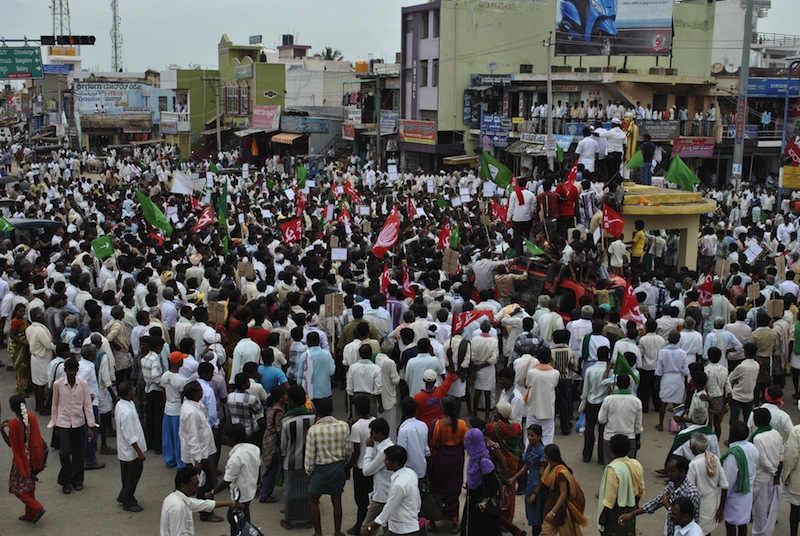   4000 people strong rally marches through Challakere, Chitradurga District in protest against diversion of 10,000 acres of AM Kaval

“Let the Chief Minister save the kavals instead of giving us 1kg rice, we will feed ourselves” – shared one of the protestors at the rally

People from around Ullarthi Kaval, Khudapura Kaval, Varavu Kaval came in thousands and gathered at Challakere, Chitradurga District to protest against the illegal diversion of 10,000 acres of Amritmahal Kavals to DRDO, BARC,ISRO, IISC, Sagitaur Ventures Pvt. Ltd, KHB and various other private and public agencies. People started marching at 9am from Dooda Ullarthi, Khudapura, Nelagitnahatti and many other villages and walked more than 15 kms to reach Challakere where they gathered at the Nehru Circle. After garlanding the statue of the former prime minister Jawaharlal Nehru they proceeded to march towards the Tahsildar’s Office.

The deep anger and resentment among people of the 80 villages around the Kaval because of the government’s illegal diversion of the Amritmahal Kavals was evident in the slogans they shouted against the state government and central government and the earlier D.C of Chitradurga, Aditya Amlan Biswas for illegally diverting the kavals. 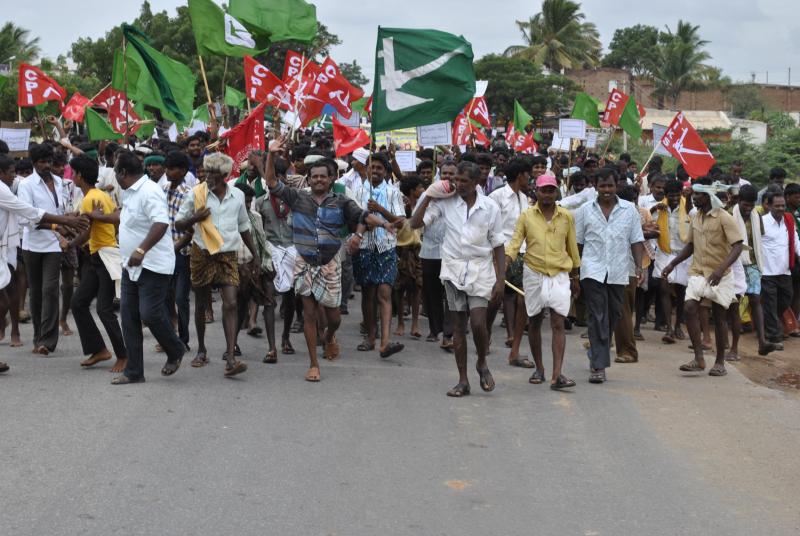 Shri S.Thippeswamy MLA of Molkalmooru, the constituency to which the 80 impacted villages belong also participated in the Padayatra.

Shri S.Thippeswamy said that Chief Minister Siddaramaiah who is known for his support to the AHINDA (Minorities, Dalits and Backward Classes) Communities must back his word and support the backward, tribal and nomadic communities of Challakere by giving the Kavals back to the people. He also spoke of how all the communities around the Kavals are essentially pastoralist in nature and they depend on the Kavals for their livelihood and all aspects of their life – firewood, medicinal plants, their folk gods and goddesses , water for the livestock etc. Taking the kavals away is like killing not just the people but an entire culture.

Shri Karianna said that the government had violated the order issued by Justice Shylendra Kumar and Justice Ashok Bhan of the Karnataka High Court which barred the government from alienating any Amritmahal Kavals for any other purposes. He also said that if the Kavals are not given back , all the 80 villages will boycott the next Lok Sabha elections.

Shri Mahalingappa spoke of the large number of Dalits and the poor, who did not have enough money to buy fodder and have started selling off their sheep and cattle, because the kavals have been diverted and there is no fodder for them. He said that it is unfortunate that a Chief Minister of the Kuruba community has been unmindful of their dutiful struggle. 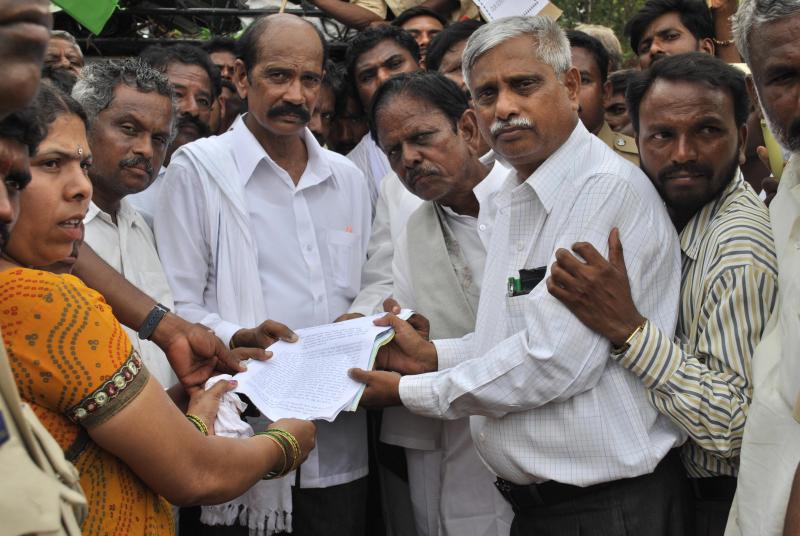 Later the massive gathering presented a memorandum to the Tahsildar of Challakere, demanding –

1)The state government should immediately suspend the Shri Aditya Amlan Biswas , who was D.C. of Chitradurga from 2008-2012 who falsified documents and illegally diverting the Kavals

3)The Karnataka State Pollution Control Board must not give any consent o DRDO, BARC, ISRO etc under any circumstances

4)The police must be directed to stop filing false criminal cases against the shepherds who use the Kavals 5)The various agencies must not prevent the people from grazing their sheep, cattle and goats.

6)As is done every year, this year too, the government must open Gosahalas in the Kavals, to attend to the distress of the communities

The Tahsildar Shri Vijayaraj received the memorandum and committed to ensusre that it would reach the Chief Minister through the D.C, Chitradurga. He also said that funds for setting up Goshalas were in the process of being sanctioned.

The gathering dispersed at 4pm vowing to return in much larger scale if the Kavals were returned to the people.