It is a disturbing indicator of the disconnect between people of Bangalore and civic agencies that an article on the prevailing garbage (mis)management in New York Times does more to alert authorities to a crisis, than does protests of rural communities against dumping of about 50,00,000 kilogrammes of the city’s ‘waste’ daily on their fields, forests, grazing pastures, canals, tanks, etc. Clearly, villagers aren’t willing to take any more of this attack on their Fundamental Right to Life and to a Clean Environment resulting in garbage piling up on the streets, possibly threatening the outbreak of an epidemic. This situation would never have occurred if the Government genuinely involved the public in decision making and ensured appropriate planning and management of the municipal solid waste stream. The only auspicious occasion for such beginnings is NOW, else it will be NEVER.

The current crisis is also a direct consequence of a crore (10 million) people behaving with an “out of sight, out of mind” approach when disposing their waste. Villagers around Bangalore don’t generate waste and yet have borne with extraordinary patience the pollution of their lands, soil, water, air, and also the contamination of their bodies and that of their cattle, due to toxics from the city’s waste. When villagers protest this attack on their Fundamental Rights, civic agencies, state government and the police have employed brute force in an attempt to crush the resistance and also fabricated false criminal charges against key leaders in a vain attempt to stymie the resistance. Meanwhile, many many promises made by various Commissioners and Mayors over the years that the damage done would be contained, victims compensated, and the villages improved, remain unfulfilled.

This situation was brought to the attention of the Karnataka High Court recently in a PIL and the Court has observed that “(t)here can be no gainsaying that the landfills are not a permanent solution”, that the “matter requires urgent decision” and that “(e)very citizen needs to be reminded that he/she has Fundamental Duties … to keep the environment clean by ensuring waste is segregated in each household..”. (These decisions may be accessed at http://tinyurl.com/cvqsgco and http://tinyurl.com/cz8tumu.)

Appropriate technological solutions, social response strategies and necessary legal standards to tackle this problem have been around for a very long time. In fact the Municipal Solid Waste Management Rules were brought into effect by the Indian Environment Ministry 12 years ago! According to these Rules, cities are required to segregate waste at source, compost organic waste locally, ensure maximum recycling, treat biomedical and hazardous wastes carefully and only dispose inert material into scientifically designed and managed landfills. The Indian Supreme Court has supervised the evolution and enactment of these standards and keen that it must become part of ordinary municipal practices imposed December 2003 as a deadline for major cities to comply with the Rules.

Since then, many Decembers have come and gone, but civic agencies like Bruhat Bengaluru Mahanagara Palike (BBMP, Bangalore’s civic agency) continue to violate with impunity these legal norms and judicial directives on waste management. It is this callousness that has resulted in the current stinking state of affairs, which, without doubt, is a shameful statement on a city that prides itself as the knowledge and IT capital of India. However, hope resurfaced when BBMP issued a series of full page advertisements on 1st October promoting segregation of waste at source as the fundamental basis of its solid waste management effort.

Shortlived it seems now because in a meeting held by the Chief Minister on this issue on 26th October 2012, a decision was taken to reopen landfills in Mavallipura, Mandur, Doddaballapur, etc. under police protection (a copy of this decision is attached). This has been followed by another decision in the BBMP Council on 30th October approving the purchase by a private firm of 400 acres of farm land off Bagepalli (near Chickaballapur), a full 100 kilometres from Bangalore, to set up the largest landfill ever conceived in India!

So if ever one imagined that the dumping culture was going to end soon, it seems unlikely if the BBMP has its way. Once more the Principle of Prior and Informed Consent of impacted communities has been fundamentally violated.

Another decision taken by the BBMP Council has been to scrap all garbage collection contracts and reissue new one’s at whopping cost of Rs. 305 crores annually. The new contractors, reportedly, are to collect only segregated waste. But it is not at all clear how this will be achieved given our common understanding of the low levels of competence of such operators to work with communities and make this transition from a dumping-to-segregating-waste-culture happen. Could the outcome be more pollution, more protests from villagers, more of garbage piling up on the city’s streets, more of the same?

We can risk waiting, or we can act now to safeguard our collective interests to ensure Bangalore will make the transition from a waste-full city to one that is waste-less. With this objective, ESG has put together a plan of action consisting of highly achievable and required actions that provide short term and long term solutions to help make Bangalore India’s first Waste-less city. We request you to review this strategy and endorse it by signing the petition at this link: http://tinyurl.com/chkc9mh.

Please note that every time you sign, a copy of your endorsement along with the petition will reach each and every decision maker connected with the waste management stream in Bangalore.

Thank you for your cooperation and support.

The Chief Minister of Karnataka

I/we write to adopt the enclosed series of actions which can ensure Bangalore transforms into a Waste-less city from its current status of “garbage city”. 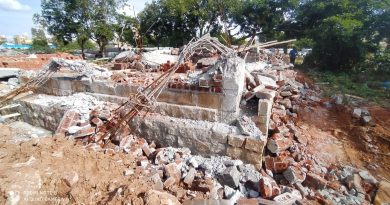