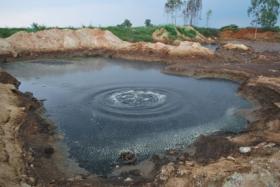 Mavallipura village, in particular its grazing pastures at Survey No. 8, has been used for dumping Bangalore’s garbage for several years now. Bruhat Bengaluru Mahanagara Palike (BBMP – Greater Bangalore Municipal Corporation) has outsourced the task of managing this landfill to M/s Ramky Environmental Engineers, a Hyderabad based concern, in accordance with Municipal Solid Waste Management Rules, enacted under the Environment Protection Act of India. However, Ramky is undertaking this task without in any manner conforming with applicable rules and standards.

Recently, lakhs of litres of highly toxic accumulated leachates were criminally discharged from several open ponds inside Ramky’s landfill and this has caused extensive contamination of Mavallipura’s lake, wells, streams and other downstream lakes as well. As a result, the entire area is infested with flies and mosquitoes and highly infectious diseases are rampantly spreading. The seepage of the toxic leachate water has seriously contaminated ground water aquifers and thus made it difficult to find drinking water from bore-wells too. The lake waters are so toxic that it has put to risk the lives of cattle, birds and other animals who have no choice but to consume this water. This is not an incidental occurrence. In fact it is the standard feature of living for communities in Mavallipura for several years now.

Prior to the Ramky facility being set up in 2007 on 100 acres of grazing pastures on the claim that it would be scientifically managed in strict conformance of the law, one Bylappa of Subedar Palya allowed BBMP to dump the city’s garbage on an abutting land which he claimed was his own land. This practice continued for four years between 2003-2007 resulting in lakhs of tonnes of garbage getting accumulated, rotting, catching fire and causing extraordinary pollution of waters, air and habitats. It was eventually discovered that this was not Bylappa’s land at all but part of the Jaarakebande State Forest. BBMP had by then paid him lakhs of rupees for renting his land and also paid him for every truck load of waste that was simply dumped.

By the time the Forest Department swung into action to recover the land, lakhs of tonnes of waste had already been dumped and that too on open ground without any safeguards whatsoever. This accumulated waste continues to discharge toxic leachates and contaminates downstream villages every day. Spread of diseases is so common that no one even complains about it any more in the affected villages.

Local affected villagers have been consistently protesting the pollution of their lands, waters, lives and livelihood spaces. The protests have been systematically led by Dalit Sangarsh Samithi for several years now. In 2005, the first major representation against such criminal pollution was submitted to the District Commissioner of Bangalore Urban, demanding that the illegal facility run by Bylappa be shut down. In addition there was a detailed representation filed with the Karnataka State Pollution Control Board to inititate action against Bylappa and BBMP. KSPCB chose to file a criminal case against Bylappa, but completely ignored BBMP’s complicity in the issue. This case is languishing without any attention.

Bangalore claims to be an high tech city and thousands of crores of investment is made in all sorts of infrastructure projects. But BBMP has not at all found the necessary resources to handle one of the most basic of urban services – scientific management of municipal solid waste. The adverse impacts of their criminal neglect for setting up scientific landfills and in appropriate locations is on hapless villagers such as in Mavallipura and other downstream areas.

Safety of Yelahanka Air Force Base significantly compromised by landfills:

Shockingly, the old illegal landfill run by Bylappa and the abutting Ramky landfill are both within 5.5 kms. of the Yelahanka Air Force Base, 7 kms. from the Jakkur Airfield and 19 kms. from the Bangalore International Airport. The Municipal Solid Waste Management Rules enacted in 2000 categorically state that such landfills cannot be located within 20 kms. of any airport. In just the past couple of years, there have been at least three air crashes at the Yelahanka Air Force Base, two of them in quick succession during the Aero India Show in 2007. Despite repeated requests, Air Force officials have refused to divulge if these accidents were caused by bird hits. The Mavallipura dumpsites thereby are significantly compromising India’s defense capability by threatening lives of pilots and causing hundreds of crores of loss by aircraft accidents. 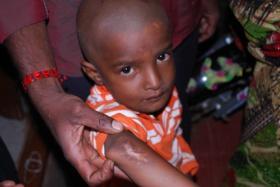 Another critical concern is that these landfills are also located within the watershed of Arkavathi River, and the toxic discharges surely find their way into T. G. Halli dam across the river from where Bangalore gets a portion of its drinking water. The cycle of pollution is thus complete for Bangalore’s residents, who throw their waste out only to find the contaminants come back to them through piped drinking water.

The worst to suffer, of course, are Mavallipura’s residents. So bad is the stench from the waste dump that now spreads over 150 acres, that people are becoming depressed and find no inspiration to go on with life. Many are even leaving their villages out of sheer desperation. The living conditions are so unlivable that the simple acting of eating has to be done within mosquito nets to avoid flies swarming their food plates.

It is imperative therefore that everyone who is concerned about environmental pollution and social justice must object to such inhuman, illogical, illegal and environmentally disastrous siting of the landfills. The Ramky landfill must be immediately phased out, the entire area decontaminated (including the landfill run by Bylappa) and the lake waters must be treated so people can resume normal life again.

Several times over the past 6 years, local villagers fed up of the unbearable stench and pollution have protested against the pollution from these landfills. Every now and then BBMP officials come and assure communities that things will improve. They promise that the villages will be sprayed with insecticides to control mosquitoes and flies, but all these have remained mere assurances. Consequently, a point has now been reached that none of these assurances mean anything to communities. The affected villagers are now very clear that the Ramky landfill must be phased out, the waste accumulated in the earlier landfill of Bylappa must be removed and the entire area decontaminated. 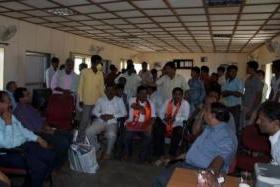 More recently, that is on 7th October 2009, responding to yet another protest due to yet another instance of acute pollution from the leachates released into lake waters by Ramky, BBMP officials called DSS and village leaders for a discussion at the facility. While these discussions were underway, Shri. Virupaksha Mysore, Jt. Commissioner of BBMP (Yelahanka) and Shri. Rangaiah, Executive Engineer, threatened DSS leaders and villagers with dire consequences if they did not stop protesting. The officials chose to send this message violently and even brought a gang of goondas to threaten and assault the villagers. All this happenned in the presence of several officials of BBMP. Seriously troubled by such brazen methods employed, the villagers refused to engage in any discussion with the officials who had gathered and insisted that the facility be shut down immediately.

It was then that the Spl. Commissioner of BBMP, Shri. Maheshwar Rao, IAS and Inspector General of Police Shri. Nadumani, IPS and several other senior officials rushed to the spot to diffuse the situation. They accepted that whatever was happening was simply unacceptable and that every effort must be made to make life easy for the affected villagers. It was even accepted that the approach adopted by Shri. Mysore was wholly uncalled for. It was then agreed that a meeting would be convened at the BBMP Hq. with the presence of the Commissioner Shri. Bharat Lal Meena, IAS in less than 48 hours. Pleased with this assurance everyone dispersed from the Ramky facility peacefully.

On that night very night, however, Shri. Mysore and Shri Rangaiah filed a false complaint against Shri. Srinivas, District Convenor of DSS and Shri. Dhanraj, DSS activist, claiming that they had assaulted the BBMP officials and put their life at risk. On the basis of this false complaint the police came in the wee hours of morning and arrested Shri. Srinivas and Shri. Dhanraj, and they had to be subsequently released on the basis of a Court bail. This is not the first time that false cases have been filed against activists for protesting pollution, but is in fact one among many such instances.

All these matters were discussed in the meeting subsequently held by the Commissioner Shri. Bharat Lal Meena on 9th October. He confirmed that action would be taken against anyone, including Ramky, who failed to comply with the environmental laws of the country. Mr. Meena also confirmed that a grave error had been committed in illegally dumping waste in Mavallipura. He also expressed his deep sense of dismay that activists and villagers protesting against pollution were being harassed with false criminal complaints. It was also clarified that such false cases, if any, would be withdrawn. Mr. Meena also accepted that it was a mistake to have threatened anyone protesting pollution with dire action.

He went to assure that there would be a comprehensive health survey conducted in all the affected villages and drinking water facilities would be provided immediately. He also appointed Shri Maheshwar Rao to oversee all these items, and promised that BBMP would adopt all 10 affected villages. 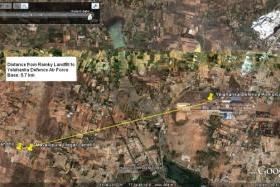 Mr. Meena also confirmed that Defense authorities had systematically raised serious concerns over the existence of the landfill so close to the Yelahanka Air Force Base. It is a matter of priority therefore, he confirmed, that from health, environmental and defense considerations the Mavallipura landfills would have to be relocated.

For the people of Mavallipura, however, such assurances have been made by previous Commissioners in the past. The history is that this is largely followed with no effective action, and officials wake up to the suffering of contaminated communities only when the protest losing all ability to stand the stench and pollution.

Years of pollution has taken a heavy toll on the health of the communities. People suffer from various serious infections and diseases. Several are dying from cancer, kidney failure, respiratory diseases, etc. Children are contracting air borne infectious diseases such as pyogenic menigitis (unknown to this area) and their immunity in general is so weak that they are susceptible to repeated infections. Tired by all this many families are migrating in desperate search of work and a better quality of living.

Keeping all these in view, on behalf of residents of Mavallipura and other affected villages, Dalit Sangarsh Samithi (S), is determined to continue their struggle till the following demands are met with:

It is our fervent hope that the Hon’ble Chief Minister of Karnataka and authorities will take appropriate steps to fulfill these just demands with immediate effect. 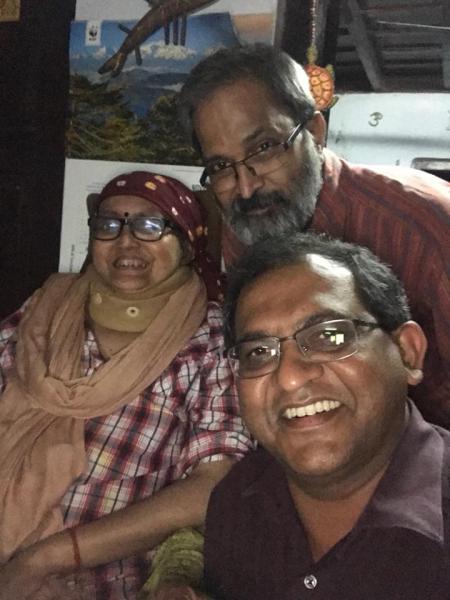 Farewell To A Rare Environmental Activist And Great Humanist: Latha Anantha Is No More