Committee to examine ecological and environmental impacts of illegal diversion of 10,000 acres of ‘Amrit Mahal Kaval’ (grasslands designated as forests) for Defense, Nuclear and Industrial projects in Chitradurga, Karnataka 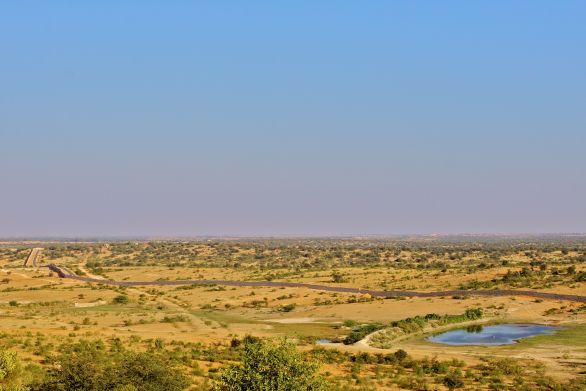 The decision to constitute the expert team was taken on 21st March 2013 based on applications filed by Leo F. Saldanha and Environment Support Group before the Tribunal during February 2013. The Applicants have consistently pointed out that the Karnataka Government comprehensively violated various forest, biodiversity and environmental protection laws while diverting about 10,000 acres of ‘Amrit Mahal Kaval’ for defense, industrial and infrastructure development projects. All this has also been done, without any Statutory Public Hearings and in total secrecy, thus comprehensively violating the Principle of Free, Prior and Informed Consent that forms a major basis of various environmental and human rights protection laws. Further, it has been vehemently contended that this diversion is in absolute contradiction to various policies of the Central Government that seek to protect grasslands and livelihoods of pastoralists.

The Applications contended that all these gross illegalities have been committed despite the widely known fact that these ecologically sensitive grassland ecosystems serve as a special and critical habitat to a variety of flora and fauna; large herds of the highly threatened antelope species such as the Black Buck (Antilope cervicapra) graze these grasslands, and the ecosystem is a typical habitat for critically endangered birds such as Great Indian Bustard (Ardeotis nigriceps, only 250 individuals known to survive in all of South Asia) and Lesser Florican (Sypheotides indicus). These grasslands ecosystems have for centuries supported the rearing of drought tolerant locally bred variety of Amrit Mahal Cattle, besides providing a wide range of livelihoods opportunities for communities in about 60 directly impacted villages located around the Kaval. It is in consideration of all these values that the Karnataka Government had designated such Kaval land as District Forests per the Karnataka Forest Rules, 1969 and their protection was made sacrosanct by directions of the Karnataka High Court in 2002 and subsequent orders of the State.

The Challakere Kaval land ranges over 12,000 acres, and constitute the last remaining large contiguous semi-arid grassland in Karnataka. The State which boasted at the time of independence of possessing about 4,00,000 acres of ‘Kaval’ grasslands, is now, per the Forest Department submissions to the Supreme Court, left with only about 45,000 acres of such habitat. Producing incontrovertible evidence before the Tribunal, the Applicants demonstrated that the beneficiaries of the illegal transfer of such ecologically precious grassland/forest land include Defense Research Development Organisation (for drone testing and development), Bhabha Atomic Research Centre (uranium enrichment facility), Indian Institute of Science (Synchroton), Indian Space Research Organisation (satellite centre), Sagitaur Pvt. Ltd. (Solar Farm), Karnataka Housing Board (township), and Karnataka Small Scale Industries Association and Karnataka Udyog Mitra (for a range of private industrial and ancillary units related to the defense sector) – all of which are projects with significant or massive environmental and social impacts. All of these proponents have been provided such ecologically precious land at a pittance of a cost: Rs. 30-35,000/acre.

The Applicants have also produced evidence that despite statutory notices of violation of environmental laws from Karnataka State Pollution Control Board, issued about two years ago, none of the project proponents have complied with any of the mandatory environmental and forest clearance norms and standards. Instead, a variety of project activities have commenced including the building of a 30 kms long high wall by DRDO in comprehensive violation of the Environment Impact Assessment Notification 2006 which categorically bars commencement of any project activity until environmental and forest clearances have been granted. Such developments have blocked local pastoralists’ access to their pasture land and to lakes and streams which are critical drinking water sources for cattle. This is particularly worrying given the long periods of drought affecting the region causing extensive distress to impacted families. Besides, the massive wall has seriously constrained the movement of the highly endangered Black Buck, and could potentially isolate the population, thus weakening its genetic vitality. In addition, DRDO is on record to have conducted various bombing sorties in the grasslands, none of which appear to have been with any consent from civil and military authorities.

The Applications filed in February 2013 have prayed for interim relief of stay on ongoing illegal activities and for allowing access to grazing pastures for local pastoralists. In consideration of this aspect the Tribunal has repeatedly sought the response of the Karnataka Government and Indian Ministry of Environment and Forests, including even directing Karnataka’s Principal Secretary for the Environment Department to appear in person on 13th March 2013. Yet, no response has been forthcoming. Taking this situation into account, the 21st March order observes that “(i)n the considered opinion of the Tribunal, the counter of the respondents have to be taken into consideration before deciding the question whether to grant an order of interim relief or not and hence, (the case hearing) has got to be adjourned granting time till 15.04.2013 to file their counter. It is made clear that if the counter is not filed by any of the respondents, it will be taken that they have no counter to offer.”

Extent of land in acres