In a significant ruling, the Division Bench of the Karnataka High Court constituted by Justice Mr. N. Kumar and Justice Mrs. B. V. Nagarathna have in their 24th October order, directed the Indian Ministry of Environment and Forests to not notify its regressive proposal to replace the Municipal Solid Waste Management Rules, 2000 with its 2013 version. The Court issued this order as it found that the Ministry’s move to comprehensively amend the exist law governing municipal solid waste management and replace them with new Rules promoted the regressive approach of collective waste without segregation at source. This the Court found “would undo what has been done in the last decade and in particular in Bangalore for the last one year in pursuance of the directions” of the Court, which had strenuously worked to ensure implementation of progressive features of the Municipal Solid Waste Management Rules, 2000.

The Court that though the “definition of the word segregation in 2000 Rules is retained in the 2013 Rules, they have omitted the Schedule-II itself” which details the process by which segregated waste should be handled and managed locally. The Court held that “(t)he effect of deletion of Schedule-II would be segregation of solid waste at the source is given a go by. The segregation of solid waste was prescribed on the basis of the recommendations of the Expert Committee as well as in pursuance of the directions issued by the Supreme Court in more than one case. Accepting the said Rules, it is submitted the authorities throughout the country have spent considerable amount in educating the citizens of this country the need to segregate the waste at source. In Bangalore, sufficient money is spent by the Bruhat Bangalore Mahanagara Palike by way of advertisements in Press, in electronic Media and even by holding public meetings. In fact, to store segregated waste, places are selected in each ward and provision is made for collection of dry waste and removal of dry waste once in three days and transportation of the same. At this juncture of time, without any reason, justification or complaint against this well established system, curiously, in the 2013 Rules, Schedule-II is deleted giving an impression that it is not obligatory any more to segregate the waste at source. It is a clear case of misreading the order. It is in that context, the court wanted to know the reasons.” (Emphasis supplied.)

Justice Mr. Kumar and Justice Mrs. Nagarathna issued this order in the Public Interest Litigation filed by Environment Support Group (W.P. 46523/2012), in which the Ministry is a Respondent, and other connected matters. On 11th October 2013, the Court had stayed the finalisation of the Draft Municipal Solid Waste Management Rules, 2013, when it was pointed out by ESG that it would comprehensively undermine all the progressive steps undertaken to resolve the garbage crises which the Court had been monitoring for a year now. It had also been highlighted that the new Rules promoted by the Ministry promoted a waste dumping culture and pushed for investing in the highly unsuccessful and toxic technology of incinerating garbage, at enormous public cost and damage to health and environment. The Court had then directed the Ministry to demonstrate why it sought now to amend the Rules, and that too without informing the Court of its intent.

In response, Addl. Solicitor General Mr. Kalyan Basavaraj submitted on 24th October to the High Court a memo that claimed that the Rules were framed in compliance with the 11th October 2011 order of the National Green Tribunal (New Delhi) in OA No. 2/2011. The High Court perused the order in detail and found that the Tribunal had ordered the Ministry “…to critically review the MSW Rules, 2000 and make it more pragmatic, and workable” and not “undo what has been done in the last decade and in particular in Bangalore for the last one year”, referring to the progressive initiatives to cut down costs in solid waste management and also make citizenry more responsible for the waste they generate by segregating it at source by adopting environment and health friendly methods.

The High Court’s 24th October order modifies the earlier order of 11th October and allows the Ministry to “…proceed to consider the objections and then prepare yet another draft rules and thereafter they shall place it before the court.” But it has directed that the Ministry “..shall not give effect to 2013 Rules in the light of the observations made above” and without “scrutiny” of the High Court. (Emphasis supplied.)

Copies of the orders of the Karnataka High Court dated 24th October 2013 and 11th October 2013, ESG’s PIL, ESG’s critique of the Draft MSW Rules 2013 and the MoEF’s Memo may be accessed at: http://tinyurl.com/l9osbdq 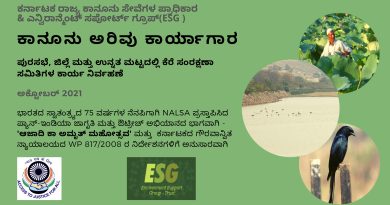 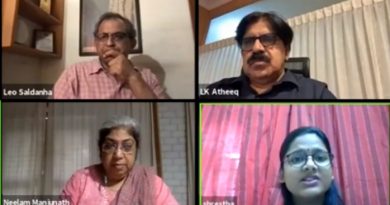