Safeguard People and the Planet

On 30 July this year, the World Bank put out a Draft Environmental and Social Framework, subtitling it as  “Setting Standards for Sustainable Development”.  This document has been widely reviewed, including recently in a meeting held at Bangkok involving representatives of various civil society organisations, peoples movements, independent research organisations, environmental and social justice action groups, trade unions, etc. The conclusion was unanimous: Demand the World Bank Withdraw its Safeguard Policy as it is nothing short of a strategy to recklessly promote coporate profit and an attack on human rights and the environment.  A Peoples Statement detailing why this demand was prepared and can be accessed above (pdf).  Also accessible at the link above is the World Bank’s Draft Safeguard Policy. 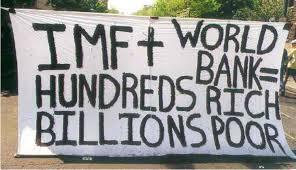 The World Bank is now holding its Annual Meetings in Washington D.C.  Peoples movements and environemntal and social action groups from across the world have also gathered there to expose the World Bank’s disastrous record in securing human rights and environmental justice and also financing undemocratic and unjust “development”. The World Bank has been called yet again to democratise itself, and ensure it is does not any more operate as extension of the US State Department, if it really means what it says: “Working for a World Free of Poverty”.

Please send your Organisational Endorsements along with full address and a one line description of your work, along with website (if available) to jgarcia@bicusa.org.