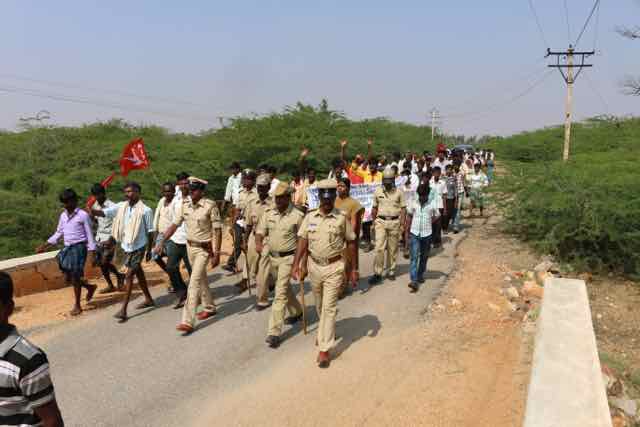 Hundreds of villagers from Doddaullarthi and other villages surrounding the massive expanse of Ullarthi Amrit Mahal Kaval of Challakere Taluk, Chitradurga district, entered the grasslands which were fenced by Bhabha Atomic Research Centre braving the might of the police and district authorities today. About 1,500 acres of these ecologically sensitive grassland ecosystems and commons had been secretively allotted to BARC of the Government of India during 2008 towards establishing an uranium enrichment plant (special materials enrichment facility) for dual use: military and civilian purposes. Without securing any clearances regulatory agencies, such as the Atomic Energy Regulatory Board, Ministry of Environment and Forests, local Panchayats, etc., BARC fenced the area in 2012 blocking villagers from accessing their grazing pastures and water bodies, and thus forcing pastoralists and farmers into distress. Villagers petitioned every office of the Government of Karnataka and India to set right the grave injustice done to them, but no corrective action was taken.

These grave injustices were raised before the National Green Tribunal in petitions filed by Leo F. Saldanha and Environment Support Group. The petitioners highlighted that in addition to BARC, other agencies such as the Defence Research Development Organisation (DRDO), Indian Institute of Science (IISC), Indian Space Research Organisation (ISRO), Sagitaur, Industries Department, etc., had commenced project activities in about 10,000 acres of Amrit Mahal Kaval grassland ecosystems, all of which had been illegally and secretively diverted for the largest nuclear/military industrial complex in the region. 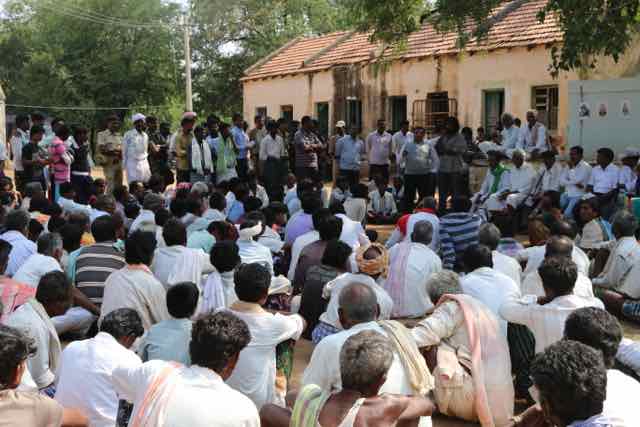 Following detailed submissions by all parties to the Petitions, including those of villagers who had impleaded in the case, the Tribunal in its final order of 27th August 2014 held that no agency can commence any project activity unless they were compliant with applicable statutory norms, procedures and clearance requirements per environmental, biodiversity protection, pollution control and project specific laws.

In blatant disregard of the Tribunal’s decisions, BARC, DRDO and IISC have been undertaking extensive project activities with impunity. When challenged by local villagers recently, in the presence of the Challakere Tahsildhar (Taluk Revenue Officer) and Police Circle Inspector, BARC fished out a piece of unsigned paper claiming it had received final environmental clearance on 24th July 2014, way before the Tribunal’s ruling. The unattested note claimed the clearance was a “secret” document. 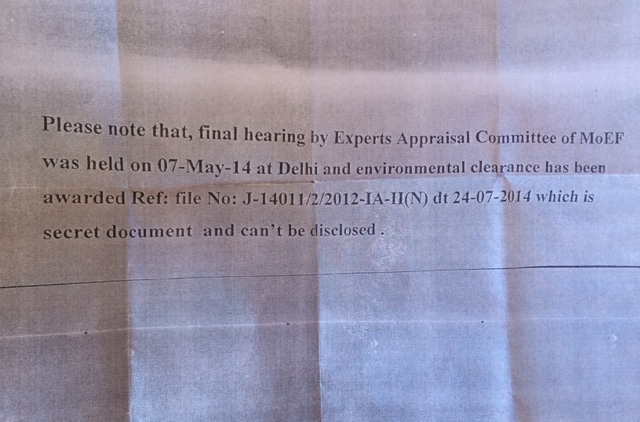 Interestingly, at para 205 in the final order of the Tribunal it is noted that: “ The respondent/BARC has stated in its reply affidavit that the major constructional activities at the site would be carried out after obtaining necessary clearance from MoEF and KSPCB which would be indicative of the fact that necessary clearances have not yet been obtained.” On the basis of this submission, the Tribunal directed that “It is made clear that both BARC and ISRO shall proceed with the activities either constructional or otherwise on establishment of respective projects, only after obtaining environmental clearance from MoEF and consent for establishment from KSPCB.” Thus, there is no doubt whatsoever that when the Tribunal issued its final decision, i.e. On 27th August 2014, no agency had obtained environmental clearance.

BARC, however, has publicly claimed, and by way of its unsigned note shared in the presence of district and police authorities, it has secured environmental clearance for the uranium enrichment plant on 24th July 2014, quite in variance to the statements made by its Senior Counsel, Shri. Uday Holla, before the Tribunal, that no clearance had yet been secured at the time of the judgment. This is clear proof that not only has BARC misled the Tribunal, but that it is now mis-leading district authorities and the police, and also the wide public. Such claims also place the Indian Ministry of Environment and Forests in a very awkward position, for the Ministry held in its affidavit before the Tribunal that Amrit Mahal Kavals are forests, and thus, no environmental clearances could be accorded unless the issue whether Amrit Mahal Kavals are forests or not is resolved by the Hon’ble Supreme Court in accordance with its decisions in the Godavarman/Lafarge case. 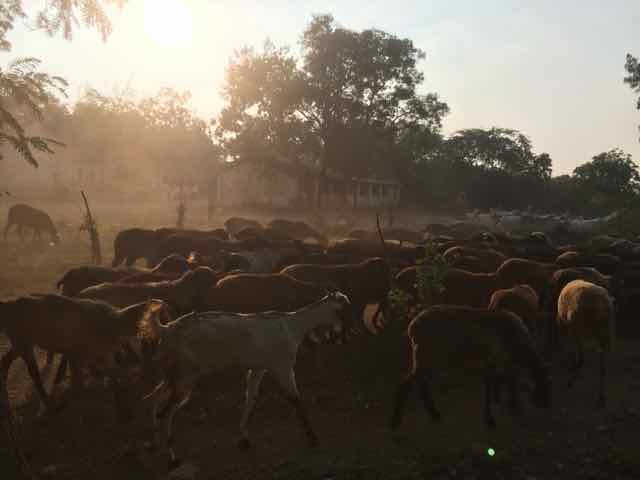 To expose BARC’s lies and to reclaims their commons that had been illegally blocked for over two years, hundreds of villagers marched into the Ullarthi Kavals today with thousands of sheep, goats and cattle. A massive police cordon was formed to push them back, but had to step back when confronted with the fact that any action against the villagers would be an abrogation of the Tribunal’s orders. Villagers asserted that stopping the ongoing illegal construction by BARC was their Constitutional obligation, and they would implement the Tribunal’s decision if the police and district authorities failed to. Heeding to their justful demands, the Tahsildhar and the police removed the cordons allowing villagers to joyfully march into the Kavals in a celebratory mood, where they festively made a meal of ragi (finger millet) and rice. The Tahsildhar also announced that a meeting would be called in a few days by the District Commissioner, involving all agencies, to address all issues and concerns of the villagers and also to ensure the Hon’ble Tribunal’s orders were complied with rigorously.