A Statement by the Coalition for Environmental Justice in India

COALITION FOR ENVIRONMENTAL JUSTICE IN INDIA

We strongly condemn the late night arrest (on 18thJune 2018) by the Tamil Nadu police of Piyush ManushSethia of Salem Citizens’ Forum, Mansoor Ali Khan, an actor and Valarmathi, a student activist, and possibly others, who have been engaged in opposing a range of socially and environmentally destructive projects.  Piyush is a widely respected social and environmental activist who has relentlessly worked to protect farms and forests, and also organized communities to revive tens of lakes and forest patches.   Their arrests highlights once again the gross disregard the Tamil nadu police in particular, and the administration in general, has for peoples’ genuine interests, and for human rights and the environment. 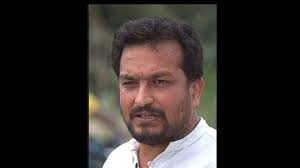 Piyush’s politics is to organize and fight all forms of oppression: be it by the State, Caste based oppression, or by environmentally destructive corporate forces. He has mobilized communities in claiming their fundamental freedoms guaranteed in the Constitution of India, and is widely acknowledged for his civil disobedience efforts in exposing corrupt forces.  In so doing, Piyush has exploited to the hilt his fundamental freedoms, particularly his Freedom to Express.  His efforts have gained popular support and hurt anti-democratic and corrupt forces fundamentally.

For engaging in such liberating politics, Piyush has been targeted time and again by vested interests and the police. In July 2016, the police picked him up for organizing protests against the Muluvadi Gate over-bridge in Salem, illegally detained him, then held him in solitary confinement and tortured him for days. Had Piyush’s wife Monica Sethia not managed to secure his release on bail, the police would have done their worst on him. Undeterred by such assaults on his fundamental freedoms and on his body, and on the security of his family, Piyush has returned to fight more vigorously against oppressive forces, against corruption, against environmental destruction and against social ostracization of the Dalits.

Piyush’s arrest now is the direct outcome of his participation in a very popular resistance by farming and other impacted communities to the expansion of Salem airport and the building of a 8 lane (900 feet wide) 275 kms long Chennai-Salem expressway at an estimated cost of Rs. 10,000 crores[1].  The expressway project would require 2800 hectares of prime farmland, will cut through eight reserve forests (fragmenting forests and wildlife corridors), directly displace 32 human settlements[2], and permanently fragment and destroy the culture and economies of tens of villages and towns.

There already are three roads connecting these two cities and they can be easily strengthened at a fraction of the cost  of the proposed fourth road – the 8 lane expressway!  This expressway cleared by Union Minister for Road Transport, Highways, Shipping and Water ResourcesMr. Nitin Gadkari in February 2018 as a fast track project, has been rushed through into tendering for construction, even when land acquisition processes has not even been initiated. This access controlled expressway offers no benefit whatsoever to the tens of directly impacted villages and towns. In fact, this massive road will slap a swathe of environmentally brutal concrete across some of the finest farms irrigated by the Cauvery river, and will interfere directly with the flows of the river. While the need for this super-expensive project is in serious question, the Tamil Nadu and Union Governments have engaged in a high pitch media campaign to claim the massive displacement and devastation of farmers and pastoralists, and of riverine ecology and forests, is in fact ‘development’. 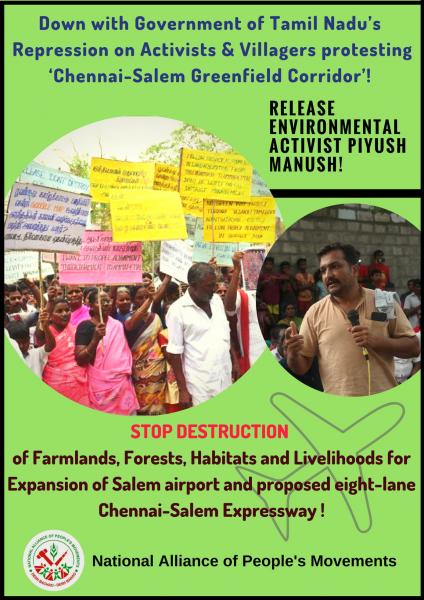 A Project for the Super Rich by stealing from the poor and future generations:

The Chennai-Salem Green Expressways and the Salem airport are part of a grand scheme of financialisng pristine farmland  and creating mega investment opportunities for the super-rich of India[3]– to make even more money for them. This handful of super rich control some of the biggest infrastructure firms in the country and play a major role in influencing the politics of this country.  This expressway, and such other projects, are part of a schema intended at triggering financialisation of farmlands and village commons – by promoting a host of infrastructure facilities such as airports, Special Economic Zones, and ‘smart cities’ – that only serve in multiplying the money of the rich, displace thousands of sustainable jobs and livelihoods, and provide no benefit at all to the overall economy. Even so, these projects are touted as critically needed infrastructure, pushed through by governments without any review, and frequently end up in massive cost overruns and as economic dissaters. For example, the Lavasa[4]project near Mumbai, once touted as a major success, is now a financial and economic disaster after destroying fertile lands and water spreads. Similarly promoted as investment sinks are roads and ports along India’s fragile coastline, causing the widespread displacement of India’s fisherfolk.

Such projects are not an outcome of democratic decision making and participatory planning overseen by District Planning Committees as is mandated in the Constitution of India (Art. 243ZD). Quite often pitched as a solution to India’s economic crisis and for lifting the poor out of poverty, these ‘infrastructure and urban development’ projects time and again have pushed the poor more into distress, widened socio-economic inequities and been at the base of draconian and undemocratic politics advancing systemic abuse of power and violation of rule of law. It is such destructive politics and developmental paradigm that Piyush Manush, a key participant in the Coalition for Environmental Justice in India, has worked to expose over decades and systematically.

We strongly condemn the arrests by Tamil Nadu police of Piyush Manush of Salem Citizens’ Forum, of actor Mansoor Ali Khan, student activist Valarmathi and possibly several others. From the FIR of the police, it is more than evident that the police have relied on hearsay and fabrication of ‘evidence’.  The theatrical statement that is claimed to have been made by Khan – “If the eight-lane project is implemented, then I will kill eight people and go to jail”, is clearly that – theatrical. He is not known to engaged in violence, nor is he part of any organisation that has engaged in violence. If anything, this statement is clearly an expression of his angst at how projects  destructive of the people of India and her environment are being promoted by those in political power, and those who control those in power.  If this constitutes grounds for Khan’s arrest, then why aren’t the jails of India overflowing with thousands of trolls who advocate communal and misogynist comments, and yet are followed by none less than Prime Minister Modi?

Prima facie, the charges filed against Piyush Manush and Mansoor Ali Khan appear fake and fabricated. The FIR itself reveals that it is based on claims of a Village Accountant that Piyush Manush and Mansoor Ali Khan threatened them on 31stMay 2018.  If this were true, would it take the Village Accountant over three weeks to bring such ‘threats’ to the attention of the police? And are the Tamil Nadu police so incompetent that they could not respond with corrective action for over three weeks?  The egregious abuse of police power is starkly evident.

Such arrests of human rights defenders and democratic dissenters is a very serious crisis in our democratic polity, not only for the people of Tamilnadu, but for all of India. This has got to stop.  If the Government has rationale backing such developments, then it needs to argue its case democratically, and not employ violence to suppress dissent. In any healthy administration, there will be zero tolerance for such blatant abuse of power as is repeatedly being experienced in Tamil Nadu.

We are all Piyush.

Piyush is not alone. Each and every one of the undersigned, and thousands and millions more who are not signatories to this statement, echo these concerns, and are with Piyush, Mansoor, Valarmathi and others who are being illegally imprisoned.  Their arrests come even as the world is yet to come to terms with the 22ndMay massacre by Tamil Nadu police sharp-shooters of 15 peaceful protestors demanding closure of toxic and illegally run infamous Vedanta’s Sterlite Copper Smelter at Thoothukudi. This demonstrates the impunity with which the police are operating, and the comprehensive lack of administrative and political restraint on the police. Piyush,  Mansoor and Valamathi’s arrests are only the most recent instance of the systemic and wanton engagement in abuse of police power.

We condemn these actions in the strongest terms and demand that:

The false and fabricated cases filed against Piyush Manush, Mansoor Ali Khan and Valarmathi and others be dropped immediately causing their unconditional release.

The Tamilnadu government must constitute a Joint-Legislature Investigation into this incident and place the report on the floor of the Assembly with due dispatch.

The entire justification for this expressway project and associated infrastructure like the Salem airport, such as Detailed Project Report, Due Diligence Report, Environmental and Social Impact Review Reports, Forest Impact Reports, Techno-Economic Viability Studies, etc., must be placed in public record, and be made comprehensively accessible in Tamil.

The Chennai-Salem Green Expressway must be subjected to review per procedures contained in Article 243ZD of the Constitution of India and other laws governing environmental and social impacts and participatory democratic planning.

(Coalition for Environmental Justice in India – CEJI is comprised of progressive organisations and individuals from across India working every day in advancing environmental and social justice for all and securing and expanding fundamental freedoms.)