The decision of the Union Minister of State for Environment and Forests (I/C), Mr. Jairam Ramesh, to place a moratorium on the clearance accorded by Genetic Engineering Approval Committee (GEAC), to the environmental release of the Bt brinjal variety developed by M/s Mahyco (an Indian seed company with substantial investment from US multinational, Monsanto) is without doubt an historic decision that is a triumph for public opinion and rational decision-making. We acknowledge the unprecedented action of Mr. Ramesh in undertaking an arduous process of public consultations across India in arriving at this conclusion.

The decision is based primarily on the opinion of scientists, various state governments, and the general public, that not enough is known about the environmental, economic, and health risks involved in introducing GMO foods in India. The Precautionary Principle is invoked, in particular based on the decision of the Hon’ble Supreme Court in the State of Andhra Pradesh vs. M.V. Nayudu and ors., and also the ongoing litigation in the Hon’ble Supreme Court about the absolute lack of safeguards in current clearance mechanisms on Genetic Engineering.

A significant limitation of this decision is that while arguing in favor of the wider public interest, based entirely on the Precautionary Principle, the Minister has unnecessarily decided that he does “not propose to do a post-mortem on the way the GEAC has functioned”, even as he admits that “(i)t is incumbent upon us as an accountable and transparent administration to respond to these concerns in a serious manner.”

This raises a whole series of issues why Mr. Jairam Ramesh is willing to submit his decision to scientific opinion and public opinion, but not to the basic question of whether the approval granted by GEAC met with the standards of public accountability and administration and also statutory compliance as required by law. Also not addressed is the issue of contamination of Certified Organic Produce, as well as the gaps that exist in regulating their safety and security of livelihoods and status of Organic Farmers.

The annexures to the Environment Minister’s report confirm that issues have been raised relating to the very legality of the research undertaken by M/s Mahyco in collaboration with the University of Agricultural Sciences (UAS), Dharwad, and M/s Sathguru (a front company of USAID and Cornell University, USA). These concerns primarily addressed the fundamental violation of the Biological Diversity Act of India, 2002, which is a representation of India’s commitment to fully and meaningfully implement the UN Convention on Biological Diversity, the Rio Declaration, and the Cartagena Protocol.

The particular issue raised was that when the research project was initiated, admittedly on the voluntary initiative of UAS, Dharwad, the guidelines under the BD Act to monitor such an international collaborative effort involving transfer of local biodiversity, import of transgenic material, and commercialisation of the product did not exist, as required under Sec. 5 of the Act. It was the mandatory obligation on the part of the collaborative partners and also the National Biodiversity Authority (NBA) to not have initiated this research project until such time the Guidelines were formulated or the Central Government took the precautionary measure of singularly approving this project, based on the need for abundant caution given the risks involved. Consequently, since the research project involved a company with substantial foreign involvement (that too, of three US institutions), the project was clearly required to be approved under Sec. 3 and 4 of the BD Act, even if in retrospect. (copy of the Biological Diversity Act is available for download – PDF, 129 KB.)

Six popular and traditional varieties of brinjal grown in Karnataka were involved in the experimentation, and thereby the approval of the Karnataka Government and the State Biodiversity Board was mandatory as per the BD Act. It is an incontrovertible fact that none of the contracting parties to this research project ever approached the Central or State governments, and also the local Biodiversity Management Committee, as required per the Act, to collect local varieties of brinjal for experimentation and commercial production using GMO technology. This fact was highlighted in the Bangalore consultation and has not at all been addressed by the Minister in his report. In fact, the issue was also addressed as an open-door policy facilitating biopiracy and undermining the due right of the local people and the State in being a part of this decision.

Another serious matter that concerns us is the fact that the Minister, in acknowledging the monopolistic possibility of “Monsanto controlling our food chain if Bt brinjal is approved”, based on the wider experience of the monopolisation of the Bt cotton seeds, states “it would not be an exaggeration to say that public concerns about Bt brinjal have been influenced very heavily by perceptions of Monsanto itself.” Such articulation clearly gives Monsanto and Mahyco an unnecessary privilege to claim that they are being discriminated against, while allowing local universities to continue their research on Bt brinjal for the market. On the other hand, the reports from all states and general public have categorically rejected all Bt brinjals and other GM foods, irrespective of nature of the promoters. It is a fact that the same GEAC which approved Mahyco’s product is also monitoring all other research on GMO under the very same unscientific and legally weak norms.

This brings us to the issue that the Minister is also administrator in charge of the effective implementation of the BD Act and its implications to GMO and other matters such as “normally traded commodities”. In the first footnote of the Minister’s report (p. 2), it is claimed that “a wholly unjustified controversy was generated by two individuals at the Bangalore consultations … by their claim that a Gazette Notification of October … 2009, exempting trade in 190 agricultural commodities from the ambit of Sec. 40 of Biological Diversity Act 2002 made these Bt brinjal consultations a sham.” The Minister goes on to justify that this has nothing to do with genetic engineering issues on hand and that the species listed in the Notification “are used as bioresources, permission of National Biodiversity Authority is still needed as export takes place.” This is a wholly incorrect representation of the concern raised.

The undersigned being those who also raised this concern had unequivocally stated that the 190 plants listed lost protection under the BD Act as stated in the deliberately inadequate Preamble of the Notification. It was also raised that this list was prepared intransparently, based on exclusive interaction with industry and some Ministry officials, not one State Biological Diversity Board or Biodiversity Protection Committee was ever consulted in the formulation of this list, and there was no public consultation in the formulation of the Notification as required under the Environment Protection Act. Besides the incidental fact that brinjal figures in the list, what is more alarming is that many of our endemic and endangered species with high religious, cultural, environmental, and medicinal value are now without any protection under the BD Act if commodified for exports. It is also a fact that several of these 190 plant species are not normally traded commodities, which raises a deep suspicion over the process, content and timing of the Notification. It is truly unfortunate that the Minister has sidestepped this key issue, and even attempted to silence such concerns. (The Notification dated 26 October 2009 is accessible at www.nbaindia.org)

All things considered, India has truly taken an historic step in saying “no” to Bt brinjal, and we hope that the people of India, through their representatives in the local governments, state legislatures, and parliament will demand a thorough review of the existing statutory processes relating to our biological diversity and also on GMO, and ensure public interest of present and future generations is not compromised in any manner whatsoever. 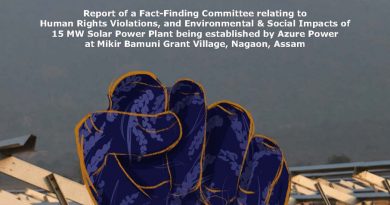 The Anatomy Of A Solar Land Grab: Press Conference Invite