At a time when there is depressing news all about, we share good news with you: All Saints Church, a living heritage of Bengaluru which completed its sesquicentennial anniversary (150 years) a year ago, is safe from Bengaluru Metro construction. The sacred grove of the church, abutting the church, was where an underground station of Namma Metro was proposed. This meant at least 100 heritage trees that created a most extraordinarily beautiful sacred grove of the church, would have been felled. Along with this destruction would have been destroyed generations of memories and the divinity of the space. Arpana, special school for autistic children ,would have met the same fate.

This beautiful church of distinctive architectural style stands to this day because Rev. S. T. Pettigrew, Founder of Bishop Cotton Boys’ School and the Cantonment Orphanage, laboured to find the money and resources to build All Saints’ Church. He was lucky to have found then Government architect Mr. Chisholm willing to design the church. But with little money, the plan languished for years. Purely out of the effort of those who would be the church’s congregation, and the voluntary labour of the Vaddar community and contributions of ordinary people, the church rose as a place to “enjoy the means of grace” and with “regard to ecclesiastical propriety”, as Pettigrew put it. He records “the shell of the building was completed for 8000 rupees that is Rs. 2000 under the estimated cost”. Put to shame for not contributing, then British Government later provided some resources to maintain the church.

Over the past 150 years, the church has served thousands of parishoners, and in recent decades hundreds of special children have benefited. This space, like tens of other such religious and spiritual places of Bengaluru, are representative of the syncretic tradition that is core to the metropolis’ culture.

Surely, for planners of the Bengaluru Metro, it would have seemed improbable to ruin this rare and sylvan space in a city so completely filled with buildings, roads and traffic. In fact, the Detailed Project Report and Environment Impact Assessment of the R-6 line of the Metro (Bannerghatta Road to Nagawara), had proposed the station would be to the west of Hosur Road on government property, opposite to the church. However, when the plans matured, the line was shifted in a way that a station was proposed inside the church campus.

This had a devastating impact on the church congregation who came to know of this from media reports in late 2018. Plans were underway to organise a major celebration of the 150th anniversary of the church by inviting His Excellency the President of India. Soon, the Karnataka Industrial Area Development Board issued notices to acquire the church land for the cut-and-cover construction of the underground station.

The congregation resisted this move through peaceful protests, which was joined by hundreds of people from across Bengaluru, from all religious and cultural backgrounds. Appeals were made to the Chief Minister of Karnataka, to the Prime Minister of India, subscribed by over 40000. Yet, the process of acquiring the church land continued. In the process, the iconic Fatima Bakery which was church land and a garage was acquired (3551 sq.m), and plans were afoot for emergency acquisition of the sacred grove in front of the church.

The faith of All Saints Church congregation that they would be able to persuade the powers that be remained undeterred. While there were legal remedies, with creative and consistent support from Environment Support Group, public action was preferred. For there was hope that the spirit of the place would speak to those with power to save the sacred grove, filled as it is with extraordinary grace and biodiversity bang in the middle of sprawling Bengaluru.

In 2019, All Saints Congregation and ESG drew the attention of the Complaints Division of European Investment Bank (EIB), which is financing this section of the Metro. Two senior officials from EIB flew in to investigate the matter. They then proposed a conciliation mechanism, which was undertaken through five online sessions (due to COVID pandemic restrictions) through 2020 in which Mr. Ajay Seth, IAS, then MD of BMRCL and his senior team, and five members of All Saints Church and ESG participated. At the end of this process, minor concessions were made, such as saving the Arpana school. But the sylvan sacred grove with its rich biodiversity would have to go, we were told.

The conciliation process helped in bringing to the attention of BMRCL that several worthier alternatives existed. This included building the station within the already acquired land of the church in three layers, (as was done in the Ashram station by Delhi Metro. Even better, to shift the station to Hotel Vellara building, at which point the station would be equidistant from Langford Road and M G Road stations, a DPR requirement. Most importantly, this choice would tremendously increase footfalls given that students would be more likely to use the station. Besides, with appropriate mixed use development of private properties, the currently dead space that the Hosur Road-Richmond Road is, could have been livened up socially and commercially, benefiting the private properties as well.

Throughout this process, and even through the lockdowns, the congregation met in the church or online, every day, to protest against the destruction of the sacred grove. Efforts continued to persuade BMRCL to save this living religious and sacred heritage of Bengaluru. Instead, KIADB proposed emergency acquisition of the sacred grove. The peaceful protests continued, and after the pandemic restrictions were lifted, moved into the church campus. With Advent, weeks before Christmas of 2021, a massive inter-religious gathering was held to save this space for posterity.

About this time, Mr. Anjum Pervez, IAS, who took over as MD of BMRCL in 2021, met with the congregation, and representatives of ESG and Heritage Beku to consider the possibility of saving the sacred grove, and thus also protecting the church from adverse impacts of the metro construction within metres of its foundation. Several meetings later with Mr. Pervez and other senior representatives of BMRCL, and with Mr. Rakesh Singh, IAS, Addl. Principal Secretary, Urban Development, Government of Karnataka, an incredibly positive result emerged: the sacred grove would be saved.

The details: against 4582 sq.m. of the sacred grove that was proposed to be acquired, only
166 sq.m. would be acquired permanently and 218 sq. m temporarily. Only 7 trees would be felled or relocated, as against over 100 heritage trees that would have been destroyed. An agreement to this effect was signed in January 2022.

At a time when the meeting of minds is so very rare, this effort by the All Saints Church congregation, BMRCL, Government of Karnataka, and various supporters of the cause, including ESG, stands out as representative of the enormous possibilities of democratic engagement. The conciliation mechanism organised by EIB helped in this process. This also helped ensure that the contestations did not end up in Court, burdening further the judiciary, and without a clear outcome in sight.

All in all, this is a story of a win win for all: religious sacred spaces saved for posterity, BMRCL can get on with the construction of the station, Special Children will not be dislocated, the Church will be protected (BMRCL has also supported studies by INTACH to protect its structural integrity), and the metropolis will be proud to claim a distinctive save of a historical, reverential, living heritage. Future generations will be grateful for these collective efforts.

It’s a Save – The Bangalore Mirror
The congregation chose to resist this move through peaceful protests, which were joined by hundreds of people from across Bengaluru

BMRCL to spare trees on church land: Activists – The Deccan Herald
Activists on Monday claimed a victory in their fight to save the sacred grove at the All Saints Church premises from the destruction it stared at due to Namma Metro’s Phase 2 project. In 2018, the Bangalore Metro Rail Corporation Limited (BMRCL) had acquired 4,582 sqm of the church land.
Citizens, Govt Join Hands To Save 140 Trees, 152-year-old Church – Times of India
Citizens and government officials have forged an amicable agreement that will help accommodate Metro construction on the premises of All Saints Church 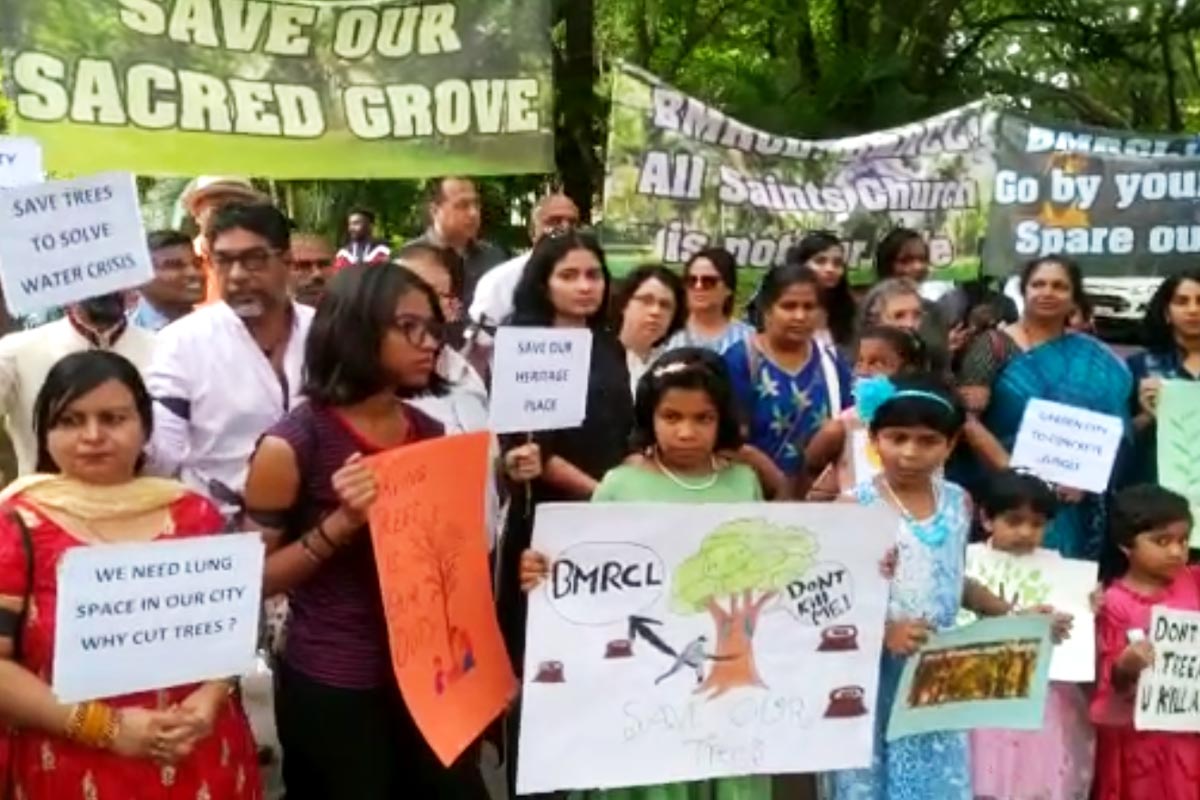 Big win for Bengaluru citizens as metro decides to spare trees at All Saints Church – The News Minute
After years of battle against the Karnataka Industrial Area Development Board, parishioners of the All Saints’ Church in Bengaluru say they can rest easy, as their church is safe from the construction of the Bengaluru metro station proposed to be built inside the church premises. As per the plan of… 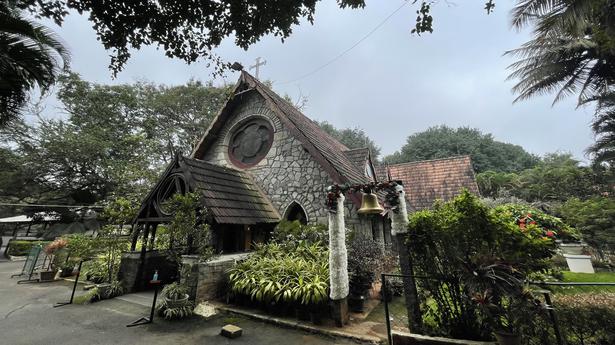 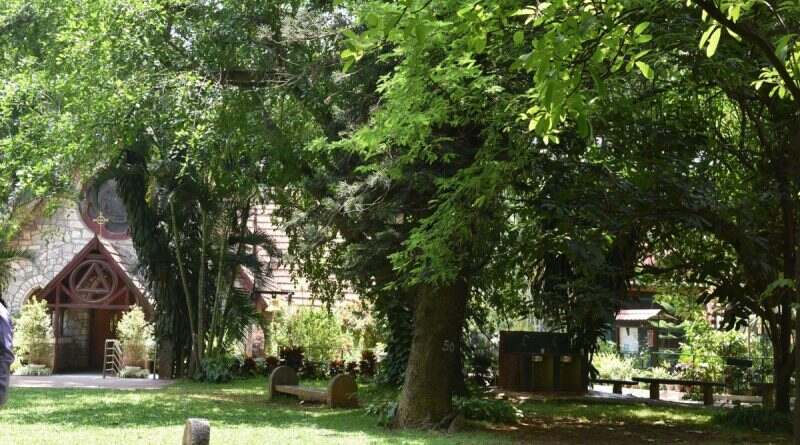