Bangalore, October 15th 2013: On the eve of World Food Day, today, Bangalore joined the Global March Against Monsanto and for food safety and seed soverignity. Hundreds of citizens including farmers, consumers, scientists, students, activists and numerous others who gathered in front of the Town Hall here loudly pronounced the rejection of GMOs in our food and farming, and of corporatisation of our food systems.

Inaugurating the public action against Monsanto, veteran freedom fighter and Gandhian Sri H.S Doraiswamy exhorted the gathering to conitnue this struggle for keeping our food and farming systems free from the clutches of Multinational corporations like Monsanto. He reminded the gathering that “the very cotton that Gandhiji used as a weapon for our freedom struggle against British Raj is now totally under the control of an American Multinational, Monsanto. This they did through aggressive marketing tactics of their proprietary Genetically Modified Bt cotton, the only GM crop commercially cultivated in our country. After gaining total control over cotton seeds they are now aiming to get control over our food crops and that needs to be stopped at any cost”

“We are joining this global movement against Monsanto here today because this company is really the poster-child of corporate greed and corporate crimes against citizens and the environment. Monsanto is notorious for a variety of misdeeds across the globe, be it killing and maiming humans with its products, bribing officials for approvals, falsifying safety reports to show the toxic products as safe, colluding with regulators through a system of revolving doors, false advertising etc. It is a matter of great alarm that governments are getting into partnerships with this corporation and jeopardizing seed sovereignity of Indian farmers. We are here to show corporations like Monsanto that citizens of India do care about the distress of Indian farmers and will not tolerate any jeopardizing of our farming, food and environment”, said P Srinivas, co convenor, GM Free Karnataka Coalition.

On 11th October 2013, the Karnataka High Court has dismissed petitions that challenged criminal prosecution of top officials of Monsanto/Mahyco and University of Agricultural Sciences, Dharwar who have been accused of the egregious crime of biopiracy in promotion of Bt Brinjal, India’s first food GMO. Speaking at the occasion Leo Saldanha of Environment Support Group (ESG) which first exposed this serious crime said: “Monsanto has historically worked to take away control over seeds from local farming communities as an integral part of their business model. Now they have been caught red handed illegally appropriating Brinjal varieties endemic to India and which constitute our biodiversity heritage. We will continue to closely monitor efforts of national and state biopiracy regulatory agencies to ensure the criminal proceedings against the corporation and collaborating institutions reaches its logical end and serves as an example against similar biopirates for all time to come.”

Highlighting the massive failure of Bt cotton in Karnataka this khariff season Anekatti Vishwanath, farmer leader from Dodballapur near Bangalore observed that “ the Bt cotton myth has been broken. It has neither increased the yields nor has it brought down the pesticide use. All that it has done is to give the entire cotton seed market into the hands of Monsanto which has earned hundreds of crores as royalties from our farmers. The tragedy is that our own government and public sector agriculture institutions are hand in glow in this fraud.” He demanded the state govt to immediately conduct an investigation into the failure of Bt cotton in the state and blacklist companies like Monsanto which has pushed the poor farmer in Karnataka to severe distress.

The gathering in front of Town Hall raised slogans against Genetically Modified crops and Monsanto and sang songs about the need for ecological farming and our food and farming traditions. 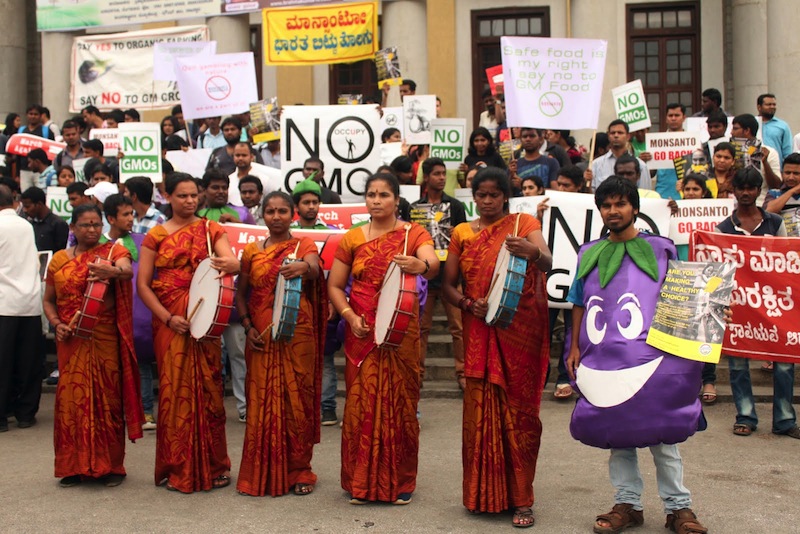 “With the mindless promotion of risky technologies like GM crops what is under threat is our future” said Prajesh Premnath, a student from city’s St. Josephs college who had joined the protest along with scores of other college students.

“On the one hand scientific evidence on adverse impacts of GM crops on human health, environment and farm livelihoods are increasing by the day and on the other hand our central government is out on a limb to push GM crops into our farms and plates” said Neha Saigal, Sustainable Agriculture campaigner, Greenpeace India, She further stated that “the latest in these efforts is the Biotechnology Regulatory Authority of India (BRAI) Bill which has been introduced in the last session of the parliament. The bill proposes to create a single window clearence system which is designed for easy approval of GM crops. This is nothing but a Monsanto protection and Promotion law.”

Addressing the gathering Kavitha Kuruganti, National Convenor, Alliance for Sustainable and Holistic Agriculture (ASHA) called the attention of the National and state govt to the fact that this World Food day has a theme of ‘Sustainable Food systems for food security and Nutrition’. She reminded them that “it is hightime that we steer away from an agriculture paradigm promoted by multinational corporations like Monsanto which fills our farms and food with toxic chemicals and risky GM crops for the profit of these companies into an ecological farming paradigm which has a triple bottomline of social, ecological and economic sustainability”.

The gathering took a solemn oath to continue the struggle to keep our food and farming systems safe from agri corporations and their agrochemicals and GMOs.