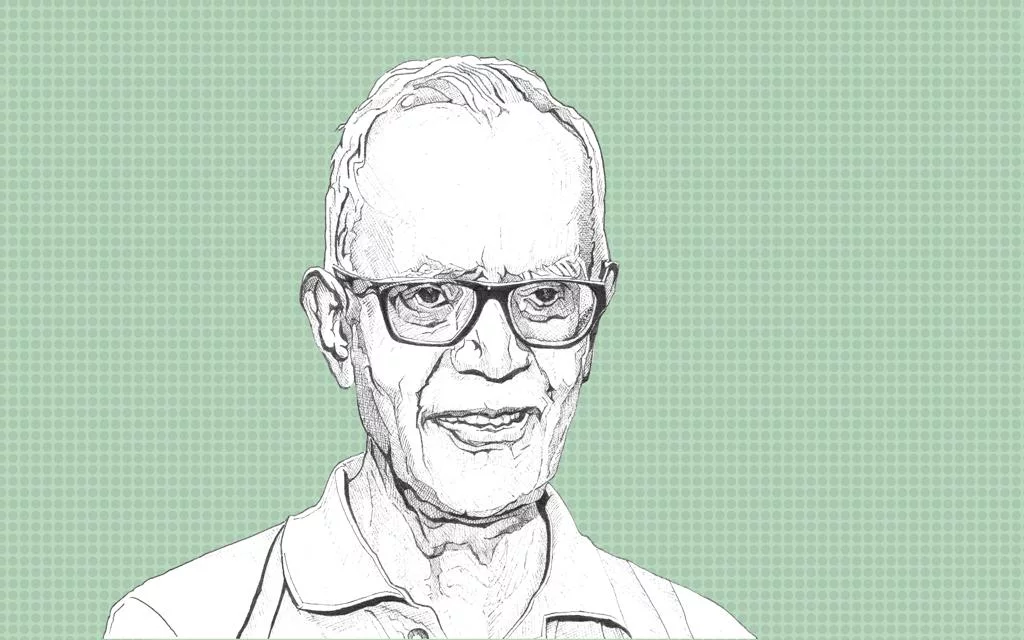 Fr. Stan Swamy, a Jesuit priest who worked with Dalits and adivasis, in South and Central India, passed away in custody on 5th July, due to a cardiac and post-covid complications. Fr. Swamy was the oldest undertrial in India and one of the 16 Bhima Koregaon accused, a case widely condemned as fabricated, an effort to muzzle dissenters and those working with vulnerable communities and incredibly includes preposterous allegations of a plot to violently overthrow the Narendra Modi led government.  Recent independent analysis of evidence present reveals that nothing that is alleged could stand the test of judicial scrutiny. The accused have been jailed in Taloja Jail in Mumbai, some for three years, and Fr. Swamy for over 9 months.

Those who knew Fr. Stan from close, know him as a gentle and compassionate man, and who always worked with depressed and vulnerable communities engaging in peaceful means to secure their Constitutionally guaranteed fundamental rights. In A Bharat Ratna Dies an Undertrial, Leo F. Saldanha draws inspiration from Fr. Stan’s life and work, and comments that the manner of his death, his incarceration and the defencelessness of the righteous is a reflection of the state of affairs in India today.   Pic via idronline

Following on the historic 15 June 2021 judgment of the Principal Bench of Karnataka High Court on  empowering local communities and governments in lake protection, the Court in another significant order on 14th July 2021 directed the State Government and the Urban Development Department to hasten work on surveying the legal limits of lakes and their 30-meter buffer zones, also of raja kaluves, and ensure encroachments are removed.

Janani Suresh of ESG wonders how local parks in Bengaluru city are designed – rectangular pathways – and imagines a place that hosts climbing trees, dew laden grass or just directionless rambling for unstructured joy to find a place. Such activities offer a more enriching lived experience of the city “as opposed to robotic walking”, she argues.

As Covid-19 pandemic continues unabated, though with lesser intensity, Aseem Shrivastava and Rupert Read write in Open Magazine about the dangers of espousing technology and economics as magic bullets, while nature is brutalised. Meanwhile, the highly transmissible variants of Covid-19 virus have pushed the world into various stages of bracing up for the third wave.  The WHO Chief has attributed this global rise in infections and deaths to increased social mobility and inconsistencies in public health measures. Former Indian Health Secretary K Sujatha Rao has also analysed the lockdowns India enforced and says they “a big mistake”. Instead, she argues for  vastly improved and decentralised public health management and micro-level planning at the community level to tackle pandemics and to avoid public health disasters. This view is echosed by EP Nivedita and Srikanth Viswanathan who argue in The Print that the need is to learn from the mistakes and transition towards a decentralised form of governance.

Scientists have provided fresh evidence linking heatwaves that ravaged western Canada and the US with climate change. They termed the occurrence of the phenomenon “virtually impossible” without human influence. This explainer in the Indian Express decodes the phenomenon of ‘heat dome’, the basis of the unprecedented heatwave in North America. Lou Del Bello in conversation with climate resilience entrepreneur Barath Mahadevan, provides a glimpse of what went wrong in the West and some lessons for  South Asia in countering heatwaves.

A rather disconcerting new revelation is that the Amazon rainforest is now emitting more carbon dioxide than it absorbs, and that this is largely due to  deliberate fires set to clear the area for commercial agriculture.  Alongside, a recent study reveals mosquito-borne diseases are more likely in a warmer world. A 20-year study has also found that extreme temperatures killed 5.08 million people every year on an average during 2000-2019 period.

Given this scenario, Kamyar Razavi suggests that there is a need for  innovative communication about the planet’s emergency, without making fear central to it.  S. G. Vombatkere suggests national level planning in addressing this situation is woefully missing, and that is the disaster that needs to be tackled now.  Besides, there is an urgent need to re-examine the unsustainable and inequitable ways of power production and distribution, writes Ashish Kothari.

Singers from the Indian mainland are voicing the pain of the changing climate in their music, reports The Wire.  In Australia, the federal court has declared that the nation’s government has a “duty” to protect young people from the impacts of climate change in a hearing on coal mine expansion. Another positive story is that the Welsh government has put a hold on new road-building projects as part of its plans to tackle the climate crisis, and appointed an external panel to review all future projects.

When Bhupendra Yadav was appointed India’s new Minister for Environment, Forests and Climate Change, it drew some cheer. But this was short lived as he persisted in pursuing his predecessor’s disastrous scheme of granting post facto approvals on the basis of fines, thus institutionalising the regularisation of violations. Ashish Kothari and Donnachadh McCarthy evaluate the term ‘net-zero’ and how it has been used by polluting companies for greenwashing their climate action plans while conducting business as usual. Both point out that the phrase has been ‘hijacked’, ‘devalued’ and is used as ‘dangerous diversion’ to conceal polluting businesses under the guise of carbon neutrality by 2050.

Ayaskant Das argues for Newsclick that the centre has also failed in laying down specific guidelines and monitoring mechanisms to review settlements of claims on forest land under the Forest Rights Act 2006. This has led to rejections of nearly 5.5 lakh applications within just one year after review directions were issued by the Supreme Court. The state government of Karnataka plans to go ahead with the Mekedatu dam on the river Cauvery. However, the project must be seen in the context of the historical experience of damming rivers and exporting water to faraway towns and cities. This will only aid more demand for water and more callous extraction from the river, irreversibly destroying an amazing gorge and a fantastic riverine forest.

In some good news, the SC quashed the direction of the NGT appointing the managing director of Oil India Ltd., the company responsible for the damage to the wetlands of the Dibru Saikhowa National Park in Assam, as a panel member to the committee assigned for the restoration of the national park after the Baghjan blowout. The Baghjan oil and gas leak fire in Assam has caused such extensive damage that it will take a decade or more for the biodiversity to recover.

In Latin America, defenders of the environment are facing attacks for upholding environmental and human rights. George Monbiot, in this opinion piece, expresses how media outlets such as the BBC must be held accountable for amplifying the voices of climate deniers and confusing mainstream audiences on climate change.

Ahead of the first UN High-Level Dialogue on Energy since the oil crisis, Damilola Ogunbiyi, CEO and Special Representative of the UN Secretary-General, Sustainable Energy for All, writes for the World Economic Forum on the critical need to keep equity, justice and inclusiveness at the heart of the energy transition. While a new tool called “SiteRight”  is launched to help identify areas where solar and wind development is less likely to encounter social as well as ecological conflicts. A recent incident of a camel that bled to death after being cut by equipment at a solar park in Rajasthan, is a reminder of the criticality of getting solar energy right.

At a time when the total amount of rice available to Indians per annum has reduced from 80 kgs in 1991 to 70 Kgs in 2019, the Indian government is planning to sell rice to breweries to make ethanol at subsidised rates. The MOEFCC has also issued  two executive orders excluding sugar mills from several impact assessments. This means these industries will be able to shift production towards ethanol merely on the basis of self certification.

The Government of India’s move to digitise agriculture is increasingly appearing as an extension of the controversial farm laws that were passed last year. In the absence of strict data laws in the country and due to a lack of representation in the development process of AgriStack, many farmers have begun to actively oppose the programme.

The Uttar Pradesh government unveiled a new population policy on World Population Day in a bid to control and reduce the gross fertility rate among women in India’s most populous state. Similar policies had been introduced in other Indian states at some point in time as well. However, experts believe that the draft bill goes against the Centre’s 2020 Affidavit before the Supreme Court that states coercion in family planning could be counterproductive and is an attempt to emulate China’s infamous and failed ‘one child policy’. The bill has also been criticized for trivialising the importance of empowering women for stabilizing the population. With Uttar Pradesh already witnessing a downward trend in population, one could ask if such a measure is at all required?

The Indian Supreme Court has decided to hear a petition from Maj. Gen SG Vombatkere (Retd) challenging the constitutional validity of Section 124A of the Indian Penal Code (sedition provision).

A report by Greenpeace India has recorded a dramatic increase in Nitrogen Dioxide (NO2) emission across eight Indian cities, with Bengaluru recording a 90% spike. The study attributes most of it to vehicular emissions, and calls for city planners to initiate transition from private vehicles to a clean and safe public transport system that runs on clean energy.

The concept of Miyawaki forests had gained traction over the years, especially in ideas surrounding urban afforestation due to its dense planting technique. However, R.J. Ranjit Daniels and Anjana Vencatesan question in The Wire Science if this technique provides enough space for larger trees to grow and produce natural canopies.

Chitwan National Park, a UNESCO World Heritage Site has had a number of conservation achievements. But a close observation reveals it to be a contested space. Peter Gill writes in Scroll how thousands were displaced from their homes to create the national park

It only needs a little probing and imagination to conceive a future where livelihoods, empowerment and climate resilience can go hand in hand. In its sixth season, Eco India gives illuminating examples of such possibilities.