A workshop on Lake Conservation was organised by the Karnataka Tank Conservation and Development Authority (KTCDA) – Chitradurga in collaboration with Deputy Commissioner – Chitradurga, District Level Lake Protection Committee – Chitradurga and Environment Support Group at Ta Ra Su Chitramandira, Chitradurga on 9th March 2022.  This capacity building workshop was organised to benefit officials from various departments at the district level and for elected representatives from local governments and community representatives of water users associations on how to enforce judicial orders, government orders and various laws relating to protection, conservation and rehabilitation of tank/lakes, ponds, raja kaluves, and such other water commons.

In particular, the workshop was an opportunity to learn of the outcomes of the Hon’ble High Court of Karnataka’s directions in WP 817/2008 (Environment Support Group and ors. Vs. State of Karnataka and ors.) c/w WP 38401/2014 (Citizens Action Group and ors. Vs. State of Karnataka and ors.), in particular the recommendations of the Justice N K Patil Committee.  The workshop was conducted as Two sessions: the morning session was for representatives of District Level Lake Protection Committee – Chitradurga, Water Users Associations, Panchayats and Municipalities, and farmers and farmer unions of the district. The second session, post lunch, addressed learning needs of all officials  of Panchayat Raj and Nagarpalika Institutions, Karnataka State Pollution Control Board, Biodiversity Management Committees, Forest Rights Committees, Village Forest Committees, Ward Committees, etc.

The event began with Shri. Mallikarjun Assistant Technical Advisor, KTCDA, Chitradurga  welcoming the participants and introducing the speakers. He highlighted the critical importance of implementing various provisions of the KTCDA Act, along with the directions of the Hon’ble High Court of Karnataka, so all the water commons of the district are protected. He emphasised the need for local communities and Panchayats and Nagarpalikas (Municipalities) to step up to the challenge and reclaim water commons for the benefit of present and future generations  Shri. Venkatraman, District Executive Officer KTCDA, Tumkur, spoke about the crucial importance of the 2014 KTCD Act  as most of the lakes in Karnataka are desperately in need of help due to the negligence, and public involvement is crucial to rescue and rehabilitate them.

Hon’ble Justice Shri. Bannikatti Hanumanthappa, Principal District and Sessions Judge, Chtradurga welcoming all to the workshops, stressed the importance of conserving water bodies everywhere to enhance water security for all.  Relating to his lived experience in North Karnataka, he said he related to the consequences of water stress and crisis which he has suffered. He emphasised the importance of farmers and other communities working  hand in hand with all departments in order to ensure all  lakes, ponds, wells and kaluves are protected and flow with healthy waters.

Smt. Kavitha S Mannikeri (IAS), Deputy Commissioner of Chitradurga and Chairperson of Chitradurga District Lake Protection Committee stressed that protection of lakes is everyone’s duty. All the discussions and learnings from this workshop needs to be shared amongst all the people in their respective towns and villages, she highlighted, so there is widespread public involvement.  Without the involvement of the public, it is not possible to protect, rehabilitate and restore water bodies to their healthy status.

Hon’ble Justice Shri. Girisha B.K, Senior Civil Judge and Member Secretary of Chitradurga District Legal Services Authority spent the entire day engaging with the workshop participants and enthused them to be fully aware of judicial orders, laws and guidelines, and to utilise them fully to protect all the water commons with the intent of gifting them to generations to come.  He emphasised that the District Lake Protection Committee and District Legal Services Authority would together ensure that every official and elected representative is aware of their due responsibilities in implementing the law and judicial directives for protecting water and water commons.  He encouraged the public at large to take up the task of protecting lakes, ponds, kaluves, wells, etc. with right earnest and systematically engage with officials, Panchayats and Municipalities, and ensure they do respond to their concerns.  In case these officials failed to attend to their complaints, he said the District Committees would be ready to tackle the laxity and help protect, rehabilitate and wisely use the water commons.  People’s consistent involvement in such public action will go  a long way in ensuring the proper functioning of the system, he highlighted. He also cautioned  officials to be well versed in all laws, orders and guidelines relating to protecting of the water commons, to act on complaints with a sense of urgency and act to correct any wrongdoing.  Failing which they would be personally held accountable for dereliction of duty.

Shri. E Balakrishna (KAS), Additional Deputy Commissioner, Chitradurga emphasised the importance of implementing the Court orders in order to protect all sources of water and their environment. 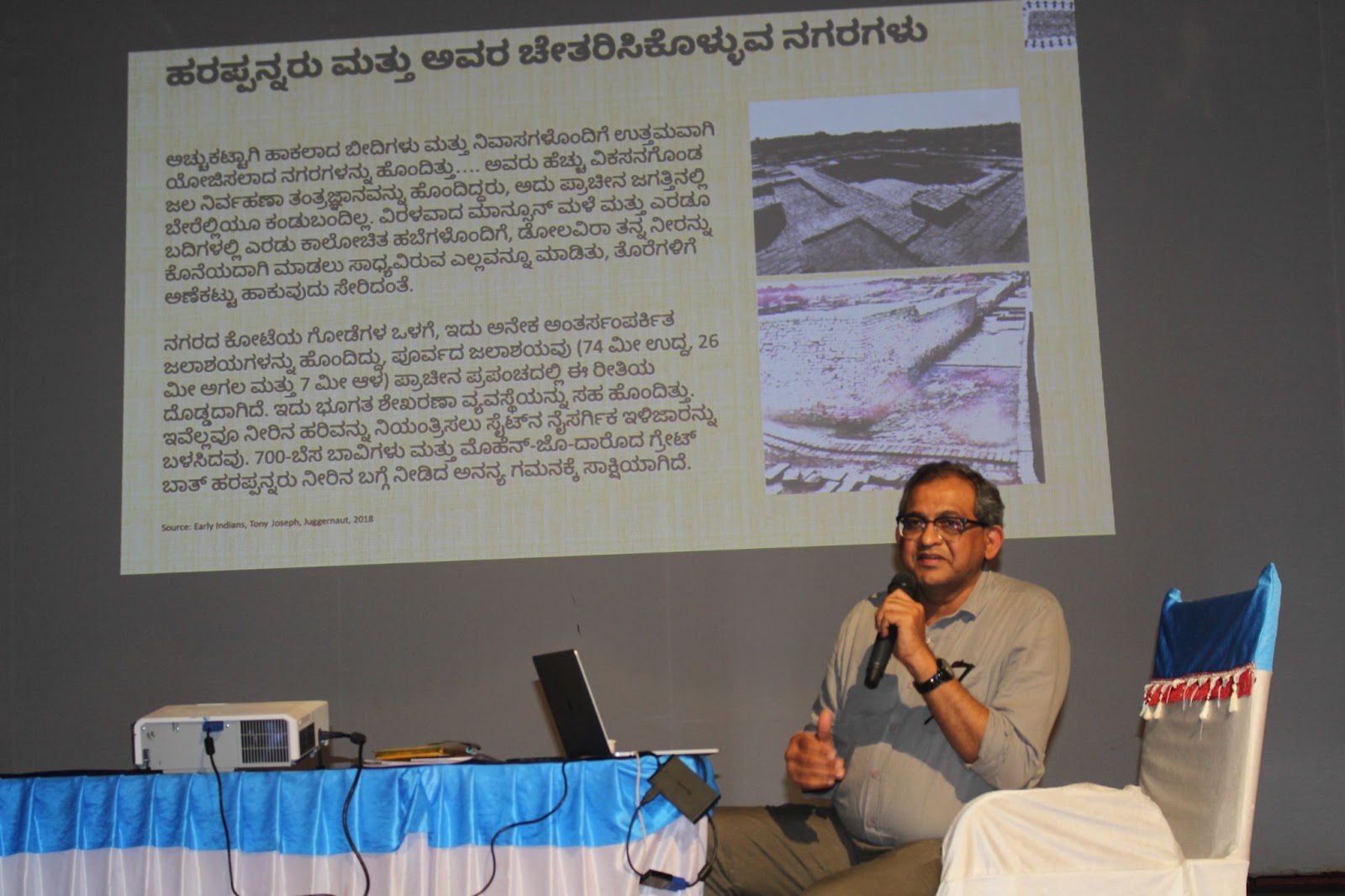 Leo Saldanha, Coordinator/Trustee of Environment Support Group explained to the audience how the tradition of water harvesting that we see everywhere is an outcome of the amazing water engineering that evolved 4 – 5000 years ago in  the Harappan civilization. If we compare how careless we are now in the way we use water, we must be drawn to the extraordinary skill and detail with which Harappans harvested water, and how carefully they ensured used/grey waters were taken out without contaminating drinking water sources.  And this they achieved in arid regions where rainfall was probably as scanty as it is in Chitradurga, now one of the driest districts in India.

Explaining the design of lakes, he emphasised that it is critical to protect entire lake series along with their raja kaluves and watersheds, as is recommended in the Justice N K Patil Committee report.  He highlighted the need for a smooth gradient in the lake’s bed, so that soil erosion is minimised, foreshores of lakes can be productive wetlands replete with vegetation and waterfowl and the entire lake can become a functional ecosystem to cultivate good water. It is also important to allow growth of endemic vegetation in raja kaluves so they can work to arrest silt flows and also purify flowing water.. In this way it is possible to restore over 39000 lakes and thousands of kilometres of raja kaluves all over the state, and make it a water secure, biodiversity secure, healthy and economically productive region of India.     In Chitradurga, it is especially critical to harvest surface water and rainwater flows and help recharge groundwater. This is because there is widespread over extraction of groundwater in the district, and lakes and kaluves are the best method to ensure they are recharged.   Besides, he called for a change in cropping patterns in the predominantly agrarian district so that water intensive crops can be slowly phased out and drought resistant crops and animal husbandry need to be strengthened. 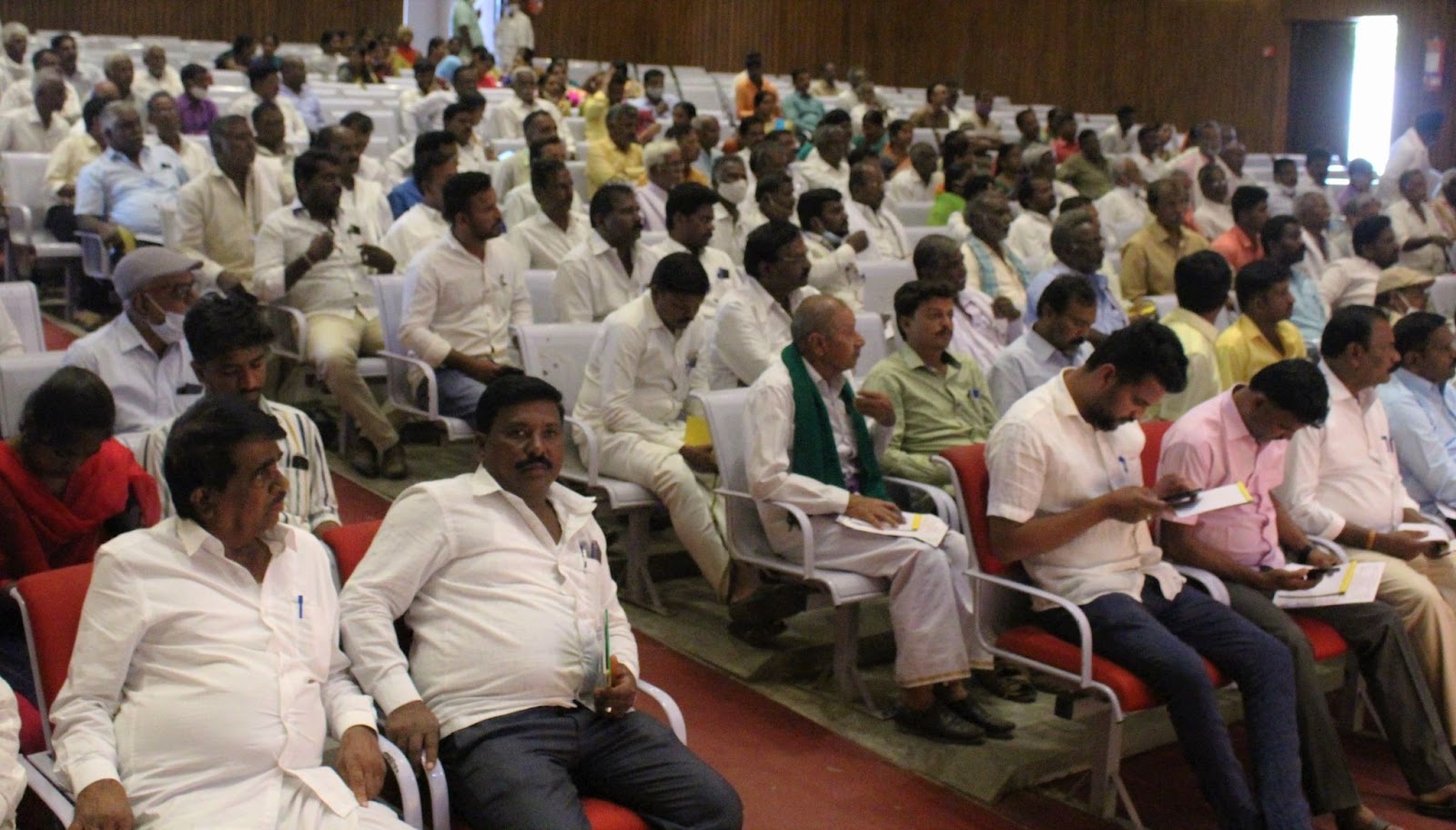 He stressed the importance of being guided by the Justice N K Patil Report Committee recommendations, which the High Court has held apply to all lakes and raja kaluves of Karnataka.  He shared various details of the Karnataka High Court directions in WP 817/2008 and WP 38401/2014, in particular that local communities can organise lake protection committees and rely on the District and Apex Lake Protection Committees for support and corrective action to recover and restore encroached and polluted water bodies.  He also emphasised that all water commons must always be accessible to all, as was advocated by Dr. B. R. Ambedkar in the 1927 Mahad Satyagraha.

Engaged discussions followed between the audience and Justice Shri Girisha, Shri Saldanha and Shri. Mallikarjuna. Through this process it was explained that: 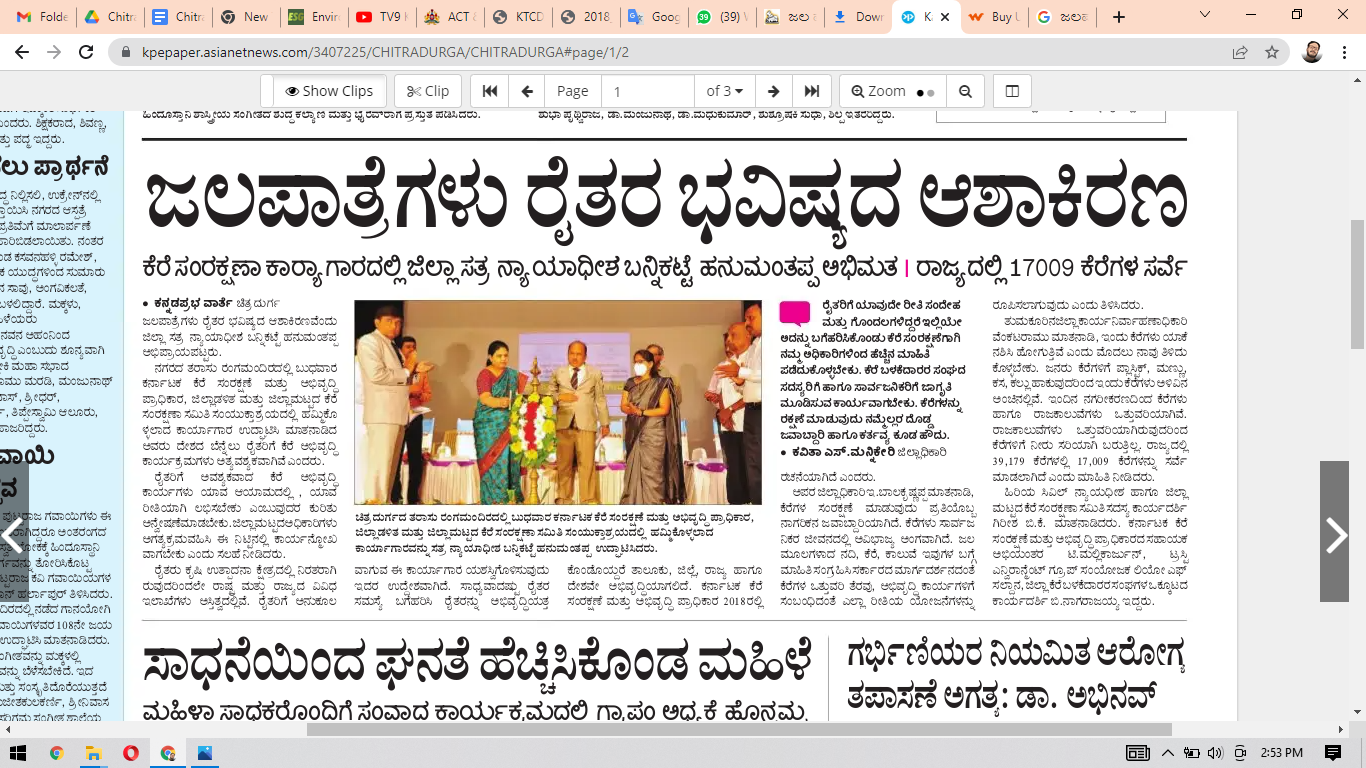 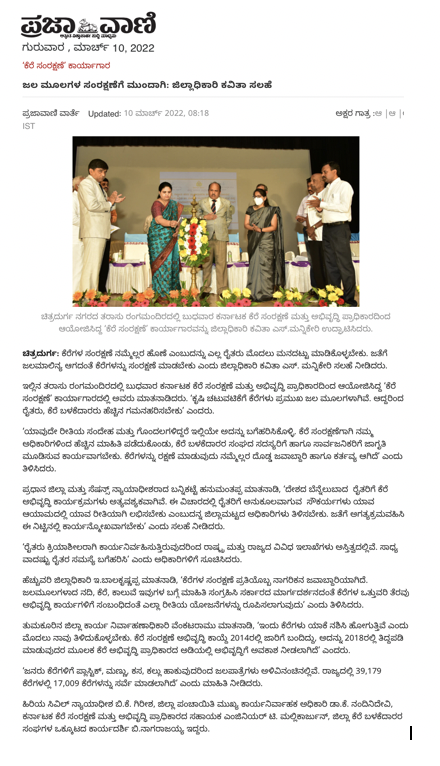