Mavallipura Landfill in Yelahanka, Bangalore under seige by villagers 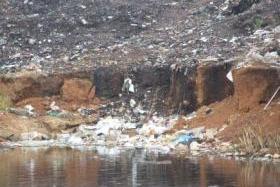 I am writing from the Ramky landfill in Mavallipura village near Yelahanka, Bangalore. Since this morning local villagers have gathered to discuss with various officials of BBMP who are on a site visit to the facility. This visit has been caused due to extensive pollution by illegal discharge of leachates (highly toxics) into drinking water wells, streams and tanks of the downstream villages. Needless to state there is simply no drinking water source here at all.

The place stinks for miles and there are flies everywhere. Villagers have been suffering this conditino every day over the past five years. Initially there was illegal dumping that was closed down, and now the Ramky facility has also illegally discharged noxious wastes, excerbating the situation.

People who have gathered since the morning in large numbers at Ramky are unwilling to let the BBMP officials leave unless the shut down this facility. They are not willing to settle for anything less because assurances have been made aplenty in the past and none kept. Several are willing to consume poison as a mark of their protest against the daily torture they endure. They are intent on finding a resolution to this problem today.

In response Health Commissioner of BBMP and his associates are not willing to take action until the Spl. Commissioner Mr. Maheshwar Rao arrives.

I am writing seeking your immediate attention and request you to come to this village and cover the situation. As I write a large posse of police have arrived. In the past presence of police has resulted in very brutal action against villagers including filing of various false criminal complaints merely for protesting pollution.

Thank you for you immediate attention to this request.

BBC Hindu Audio Report On The Mahyco Decision Of The NBA