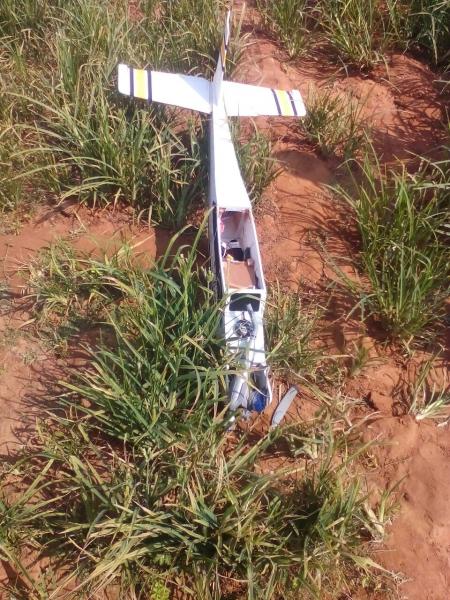 At about 0900 hours on the morning of 21st February 2018, a five feet long Unmanned Aerial Vehicle (UAV, drone) being tested by Defence Research Development Organisation (DRDO) at its facility in Khudapura and Varavu Kavals in Challakere, Chitradurga, miscued, flew for several kilometres, and crashed into a field of Bangarappa, a farmer. Thankfully no one was hurt. (A video clip of an elderly woman who ran away from the crash site is accessible here: https://youtu.be/nok9o-Pt00k)

This incident brings to light once more the high risk latent to the controversial ‘science city’ project implemented with little or no regard for applicable norms and standards, and the law, in this ecologically fragile and densely populated region. Multiple high risk projects are being pushed through in Challakere Taluk of Chitradurga district with careless disregard to specific directions of the Hon’ble National Green Tribunal (Chennai Bench) which in its 27th August 2014 order directed agencies of Government of India and State of Karnataka, and various other project proponents, to comply with the law and safeguard public interest. The Tribunal also specifically directed that the projects can proceed if and only if they conformed with applicable standards and if clearances were issued on the basis of independently “verifiable evidence”.

Safeguards not in place, and appeals for information ignored:

When on behalf of the impacted communities Mr. David George Thomas had sought information relating to compliance with NGT directions, with particular focus to the critical importance of these projects being developed with transparency and on the basis of ‘verifiable evidence’, his efforts were frustrated multiple times. The matter ended up before the Chief Information Commissioner.

While issuing final orders on 23rd October 2015, Chief Information Commissioner Prof. M. Sridhar Acharyalu had expressed his exasperation at efforts of Government of India in forestalling the need for transparency and accountability in promoting such projects in the following way: “How can informing about implementation of environmental protection order of NGT affect the security of the country?“ On this note the CIC Commissioner had directed the Government to release information about public safety and environmental compliance holding that: ““it is absolutely irrelevant and nonapplicable the claim of the respondent authority that information sought is barred from disclosure under Section 8(1) (a) stating that it would impact the strategic security installations of the nation.” Despite this order, information on guaranteeing public safety and environmental compliance was never released, even when officials were specifically held accountable to do so, including with a fine.

Risk of drones crashing on sensitive facilities raised in Court, but brushed aside by agencies:

The specific risk of losing control over Unmanned Aerial Vehicles (drones), or their miscuing in flight, and the possibility of their crashing into densely populated areas or worse, the BARC operated uranium enrichment facility abutting the DRDO test site, was highlighted in the additional grounds filed by Ms. Bhargavi S. Rao on behalf of Environment Support Group on 2nd July 2014 before the NGT. It was argued in this affidavit that “…what DRDO proposes to develop is an operation where the possibility of an aircraft miscuing and crashing into the uranium and nuclear fuel enrichment facility proposed by BARC1 is very high. Such location of highly hazardous and high risk facilities abutting each other is explicitly prohibited per the AERB norms. Seen from another point of view, the proposal of DRDO is bound by siting criteria of Aircraft Act, 1934 which also prohibits building of such aviation facilities abutting nuclear facilities. …. The sychrotron proposed for development by .. IISc is also a high risk radiation facility with strict siting norms per the AERB. All this indicates that the respondents have decided to group together several high risk, highly radioactive and high security installations abutting each other without in any manner applying their minds to the critical importance of complying strictly with the siting criteria as mandated under Atomic Energy Act, 1962, the Aircraft Act, 1934, and the Factories Act, 1948. All this implies the proposed projects offer a serious risk to public safety and to the environment in the present and inter-generational context, besides their siting being blatant violation of statutory norms.” In its response DRDO dismissed these concerns as beyond the realm of imagination, even as it admitted that the Challakere facility involved testing and building of weaponised drones which “..act as force multipliers and … are essential for the defence of the country. Such UAV’s have in the present context great use in low intensity conflict within the country.”

NGT order continues to be violated with impunity:

In its final order, the NGT acknowledged that “Government of India has sanctioned Rs. 1450.74 crores for indigenous development of the medium altitude long endurance UAV and development of aeronautical test range at Chitradurga and if the project is not completed by 2014 it would have serious setback which will be harm the interest of the nation.” Keeping this in mind, the NGT allowed the facility to proceed but subjected it to all applicable norms, standards and safeguards per law and directed regulatory agencies of Government of India to “take strict note of the observations and comments made in this judgment regarding several environmental issues and concerns raised by the applicants and include verifiable and measurable “conditions” regarding the same to be complied in full, at all stages, by the project proponents”. This direction has not at all been complied with till date, despite several representations, appeals and protests too.

It may be recalled that from 2007 the Government of Karnataka secretively diverted 10000 acres of ecologically precious Amrit Mahal Kaval grassland ecosystems to a massive military-industrial-nuclear-power complex promoted by various agencies of the Government of India (DRDO, ISRO, BARC), and also a massive solar park by the private company Sagitaur and for a second campus of Indian Institute of Science2. Local communities, Panchayats and other elected representatives were kept in the dark over this diversion. They were to realise that their grazing commons and water bodies critical to sustaining drinking water and agrarian needs of over 60 villages (with a population exceeding 300,000 people, and supporting 250,000 livestock) were out of bounds, only when massive high security walls started coming up. This has resulted in fragmenting of communities, high distress in agrarian and pastoral cultures, substantial drop in ground water aquifers (IISc has also built an illegal dam arresting flow of water to downstream tanks), and has contributed to massive impoverishment of the local people.

A docufilm, “Beerappa’s Tallana” (Kannada) and “Beerappa’s Angst” (English) which highlights the risks involved in the “science city”, including the potential consequences of a weaponised drone testing facility being located next to a sensitive nuclear facility against all norms, is accessible on Youtube. This film has been made by Leo F. Saldanha and Bhargavi S. Rao for AMKHS.

Issued on being of impacted communities by

2Indian Institue of Science has been given 1500 acres of land abutting DRDO, which it claims is a teacher training centre. Indian Space Research Organisation has been given about 500 acres which is lying walled and fallow. Sagitaur, a private corporation, has been given 1250 acres for a measly sum of Rs. 45 lakhs on a very long term lease. Similarly, a host of other agencies have been allotted land here without any consent from the local communities or Panchayats.